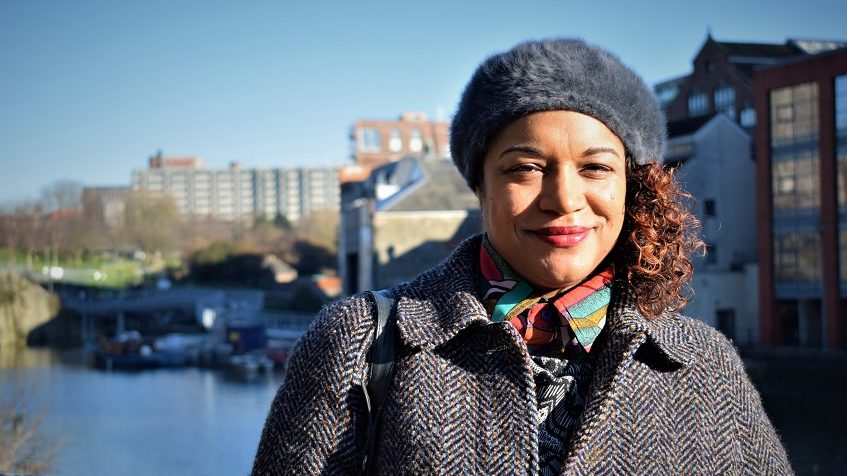 The coronavirus lockdown has re-exposed inequalities in the starkest way, says a councillor who is taking action to tackle digital exclusion during the pandemic.

Cleo Lake usually runs dance classes for elders in Bristol and, when these were cancelled, she became concerned about the welfare of the many people in the community at risk of becoming isolated and left behind due to a lack of access to smart phones, laptops or computers.

The artist and Green councillor for Cotham has launched a campaign, #GiveNTech, to redistribute unused IT equipment to those who don’t have the means to buy their own.

She already has the backing of Avon Fire and Rescue, Bristol Waste and Bristol Computer Reuse, and is now calling for support from the council in order to scale up efforts and reach more people.

Cleo usually hosts dance classes for elders but has had to stop them during lockdown. Photo by Ellie Pipe

Explaining how the idea came to fruition, Cleo says: “I decided to restart the weekly class online, but I was aware that many do not have a smart phone let alone a laptop or computer. These elders would not be able to access the online session until they get support to be online.

“It was also really hard hearing of elders and friends of mine who had passed away. This made me further reflect on the issue of isolation and how many would not be able to pay their respects via a Zoom funeral. It became something I felt deeply saddened and moved by.

“At the same time, I understood and reflected upon my own privilege. I have a smart phone, laptop and iPad which makes it easy for me to do work from home and for my 10-year-old son to study.

“I know this isn’t the case for everyone and children will be failed in this period if they can’t access support and resources. I also considered the people who would normally rely on public resources like library computers – how were they now getting online?

“One school alone that I am aware of currently need 40 laptops and fear widening inequality gaps should lockdown persist. I have been thinking about the challenge of digital exclusion before now, but this period has caused me to take action. “

Cleo adds that she is aware of other organisations, such as Creative Youth Network, that have been independently funded to distribute tablets to young people but says they cannot meet demand.

The Green councillor has been talking to officers at Bristol City Council to identify what other action is in place and believes if council support for this scheme can be confirmed quickly then it could be scaled up to reach a lot more people in need.

#GiveNTech is a tech amnesty, whereby unused IT hardware is donated, wiped of data, cleaned, fixed and given to those who need it. The pilot starts from May 18 within Avon Fire & Rescue, which is appealing to its workforce of more than 800 people to donate kit.

Vaughan Jenkins, area manager for Avon Fire and Rescue Service said: “In the modern age so much information is shared digitally and if anything we can do as a service can potentially assist a student in their extended studies away from school, college or university, or enable an older person to become digitally included then we are only too happy to part of this excellent initiative.”

Founded in 2008, Bristol Computer Reuse created a citywide project with the aim of making affordable desktop computers and laptops available to individuals and families on low incomes or facing other challenges.

Co-founder Andrew Town said: “We want Bristol to be a truly inclusive and connected digital city where everyone who would like a computer at home can have one, regardless of age, income or background.”

Joanna Dainton, the reuse coordinator at Bristol Waste added that the work to provide essential communication devices to those in need has never been so vital.

Read more: Fighting to ensure children in Barton Hill don’t get left behind