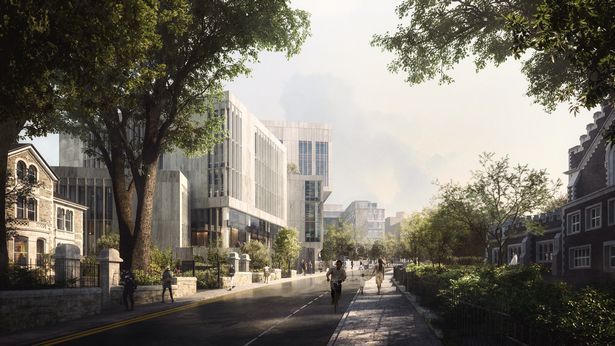 Major plans for a new University of Bristol flagship library are set to be approved.

Councillors have been advised to grant permission for the demolition of The Hawthorns – a former hotel on the corner of Woodland Road used as student accommodation, catering and offices – to be replaced by a seven-storey “landmark” building, plus two floors below ground.

A total of 176 objections were received over two rounds of consultation, including one following changes to the scheme in July, with 142 in support.

A two-way cycle track would be created through the pedestrianised area, along with two raised pedestrian crossings in Elton Road and a “bus hub” in Tyndall Avenue to consolidate campus bus stops in one location.

There would be a net loss of ten on-street car parking spaces, from 86 to 76, and 524 more cycle spaces.

A report to Bristol City Council development control committee members, who will make the decision on Wednesday, said: “There is a significant level of support for the development, but there is also a high level of concern over aspects of the proposals including heritage.

“The harm would be caused by the size of the building and the impact this would have on the character of the Whiteladies Road Conservation Area and the listed Bristol Grammar School.

“The benefits include the improvement of facilities at the university, which in turn contributes to the economy of Bristol, the delivery of a building and new public realm of outstanding design, the regeneration of a rather negative site within the conservation area, improved public transport provision and public access to the university’s theatre and special collections.

“The harm is considered to be outweighed by these public benefits. The proposal would significantly enhance the townscape and environmental value of the street scene, delivering a high-quality place that meets with the planning policy aims for the area.”

It added that the “consolidation and expansion of the university is given considerable weight in planning policy”.

Objections are from organisations including Historic England, Bristol Grammar School, Kingsdown Conservation Group, The Victorian Society and The Christmas Steps Arts Quarter for reasons such as pupils’ safety, impact on through traffic and the building’s “brutal” design being out of character with the area.

If members agree with officers’ recommendation to give the go-ahead, the university would have to stump up nearly £380,000 for a series of planning obligations to cover highways works, loss of council income from parking bays and bus facilities.

The university has said the library, which will store hundreds of thousands of books and journals including the institution’s special collections and theatre collection, will act as a gateway to the main campus.

An exhibition space, gallery and cafe would be open to the public.

It would accommodate learning and research space, with capacity for around 2,000 new study seats, about 420,000 books and 70,000 journals and new study spaces.