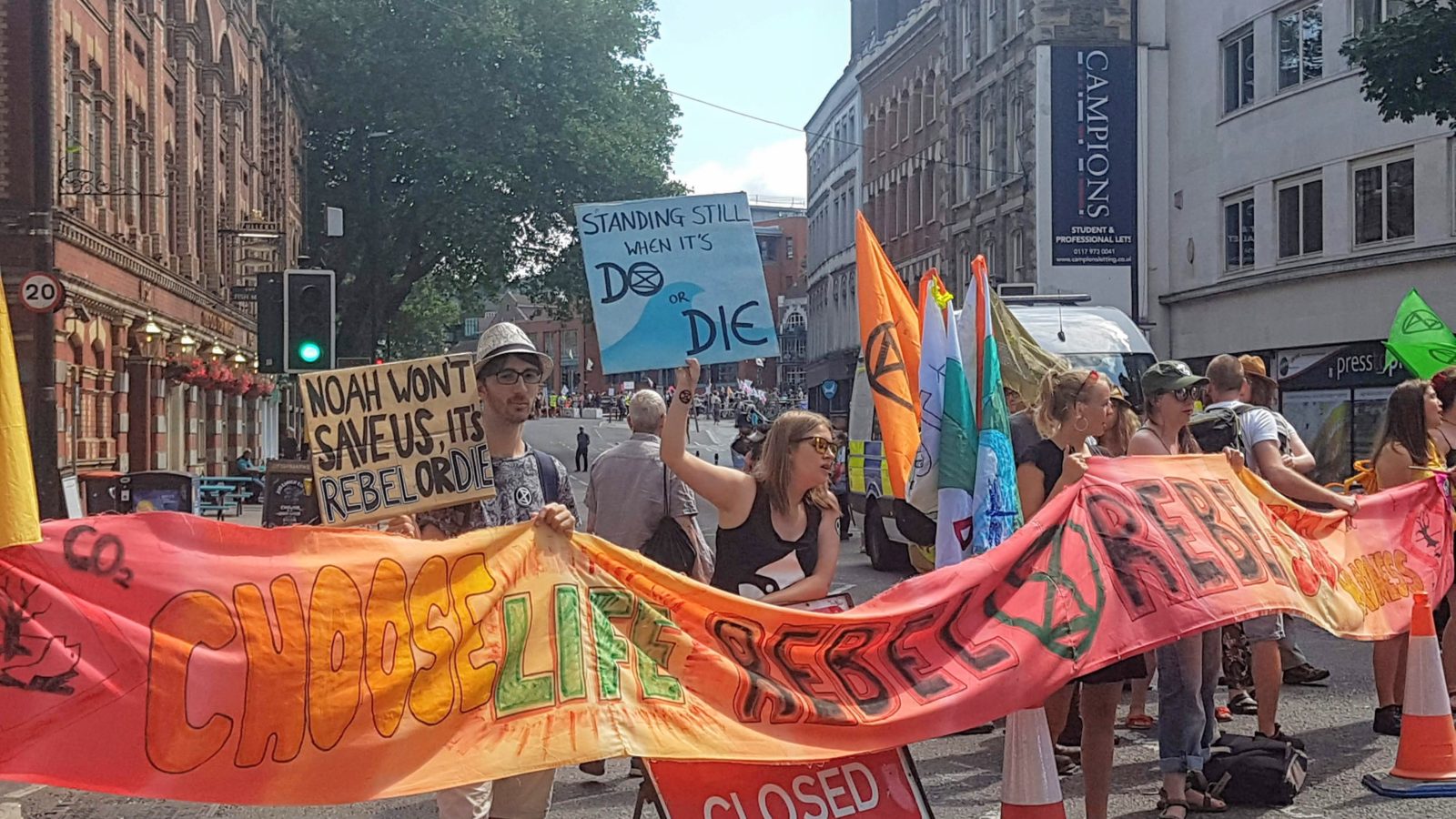 Topless Extinction Rebellion protesters made their message clear as they stood in City Hall with the words ‘act now’ emblazoned across their bare chests.

Coming in the midst of a five-day protest taking place across Bristol, campaigners called for political leaders to recognise the severity of the climate emergency and take urgent action. 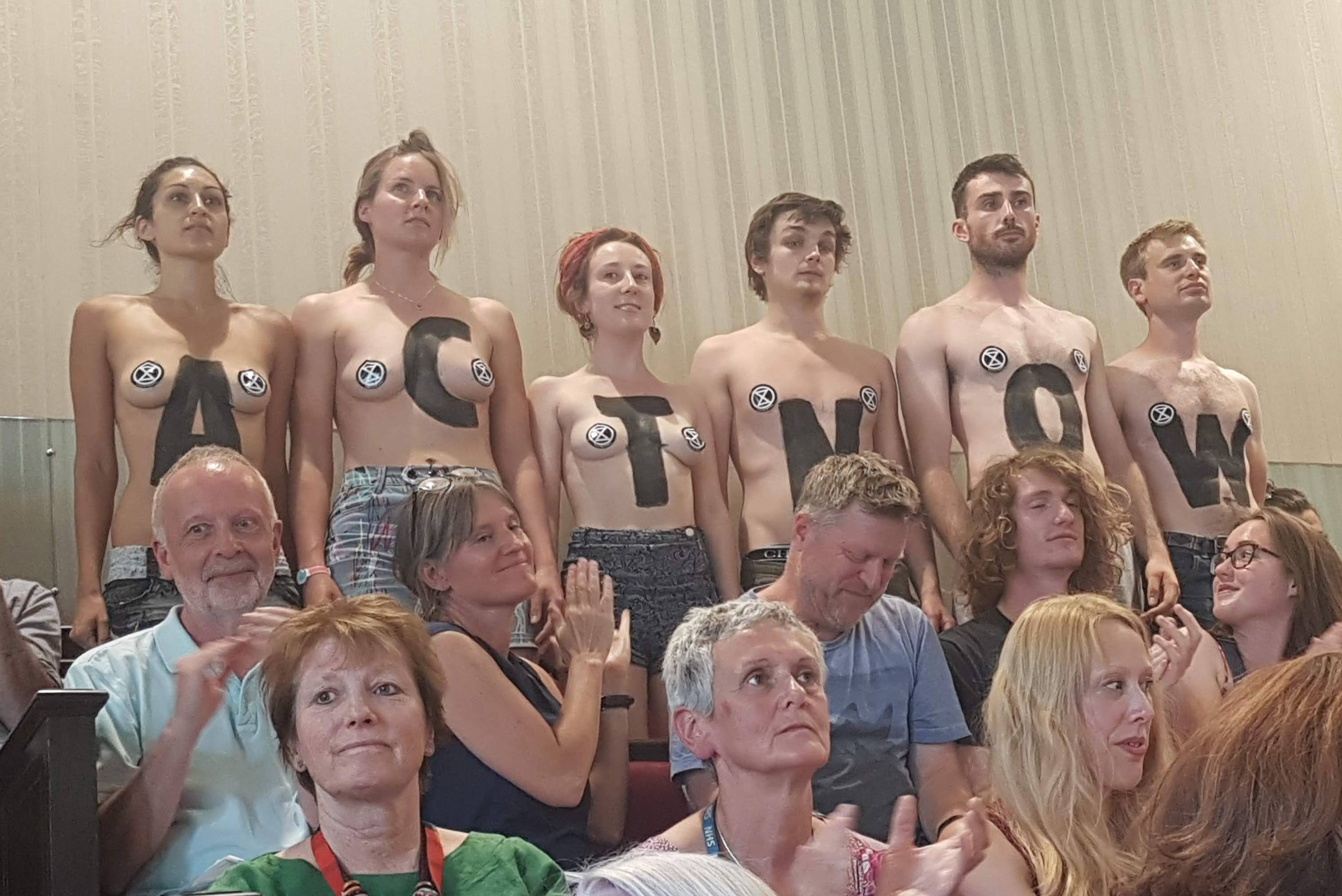 Protesters made their message clear in City Hall

Responding to the global crisis facing humanity, mayor Marvin Rees presented his plan at a full council meeting on Tuesday, reiterating that social and environmental justice must go hand in hand.

“Young and old have shown their strength of feeling on the urgent action required; and we have a duty to pass on hope in an Earth with a better climate trajectory and more just global order than we inherited,” he told the chamber.

But opposition councillors argued his proposals fail to go far enough and pointed out the “elephant in the room” is the mayor’s continued support of Bristol Airport’s proposed expansion.

Rees outlined key achievements, including the new recycling centre to be built at Hartcliffe Way, reduction in the council’s carbon emissions and opening of Bedminster’s new bio-methane fuel station for buses.

He continued: “This chamber’s political will is not enough. No council truly delivers without uniting the whole city behind that goal.

“Ultimately though, without support, clarity and funding from national government, delivering on 2030 will be near impossible.”

The mayor concluded that those who can most afford it must change their behaviour to achieve the city pledge to become carbon neutral by 2030 and argued the Government must do more to facilitate transition for those who can least afford it and are most affected.

Carla Denyer tabled the motion for Bristol to become carbon neutral by 2030 in November 2018.

Responding to Rees’ plan on Tuesday, she said it’s a positive step but argued it “does not constitute an emergency response or a change from business as usual”.

Referencing former Conservative prime minister Margaret Thatcher, Claire Hiscott told the chamber “the danger of global warming is real enough for us to make changes and sacrifices so we don’t live to the expense of future generations.”

The Tory councillor for Horfield accused the mayor of being “piecemeal” in his response, saying “it seems to be all about him. I thought it was about the planet”.

She ultimately slammed the plan as “big on spin but short on leadership”.

“The corporate strategy has got to be re-written to address the biggest problem of all and that’s climate change,” he said.

“We have got to do better than this. We really have to find a different way of working to address this problem that frankly will be the end of us unless we address it soon.”

Focusing on what he referred to as “the enormous stinking great elephant in the corner”, Steve Clarke, a Green councillor for Southville, asked: “How can it be possible that the mayor is on the one hand saying there is a climate emergency and yet is still enthusiastically supporting plans for an extra 23,600 planes a year at our airport?”

He continued: “To get an idea of the scale of the problem, the report states that the whole of Bristol’s ‘internal’ carbon emissions are 1.6million tonnes a year; the airport expansion alone will produce at least half a million tonnes more – an extra tonne of carbon for every person in Bristol. It’s crazy for us to support this.”