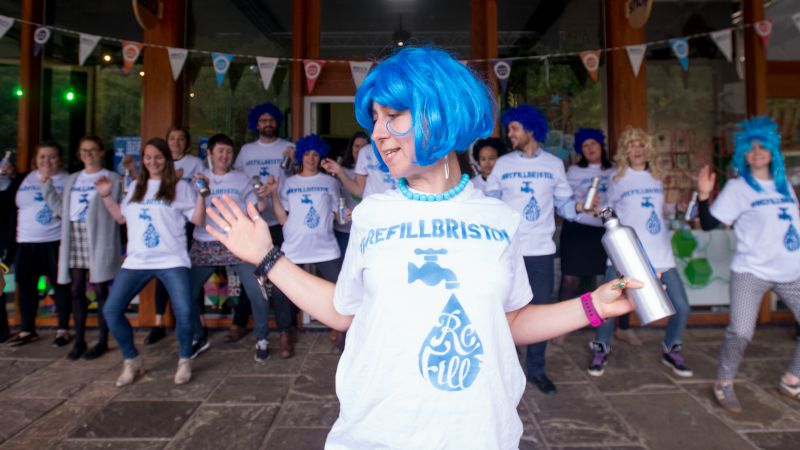 A new campaign has been launched to try a stop thousands of plastic bottles polluting the waterways of Bristol.

Refill Bristol, launched by environmental group City to Sea, is a city-wide initiative to encourage people to use refillable water bottles, rather than single use plastic bottles. Dozens of businesses, cafes, bars and restaurants across Bristol have signed up to refill bottles with tap water for free.

Campaigners say single-use plastic bottles are light and, if not discarded of carefully, end up on streets and waterways littering the Frome around Eastville, the banks of the Avon, the beaches at Portishead and further afield. They don’t just look unsightly – bottle tops are often mistaken by birds and marine animals as food with devastating consequences.

To highlight the litter problem Green Capital’s head of PR Helen Bell and her family took part in the MCS Great British Beach Clean at Brean Down South this weekend. She collected three bin bags of plastic bottles and rubbish in under an hour and described it as “shocking”.

However, the environmental impact of plastic bottles is more than just litter. The production, processing and transport of bottled water equates to an estimated 100g of carbon dioxide per bottle – or 350,000 tonnes per year according to the Natural Hydration Council.

With the average person spending more than £25000 on bottled drinks in a lifetime Natalie Fee, founder of City to Sea, says Refill Bristol is a win-win initiative “saving consumers money, whilst helping reduce the amount of plastic bottles we see all over our local riverbanks”.

“We’re fortunate to have high quality tap water here in Bristol and we hope Refill Bristol will help Bristolians fall back in love with it – by popping into one of Bristol’s excellent cafes and bars and staying hydrated for free,” she adds.

More information and a list of businesses taking part in Refill Bristol.