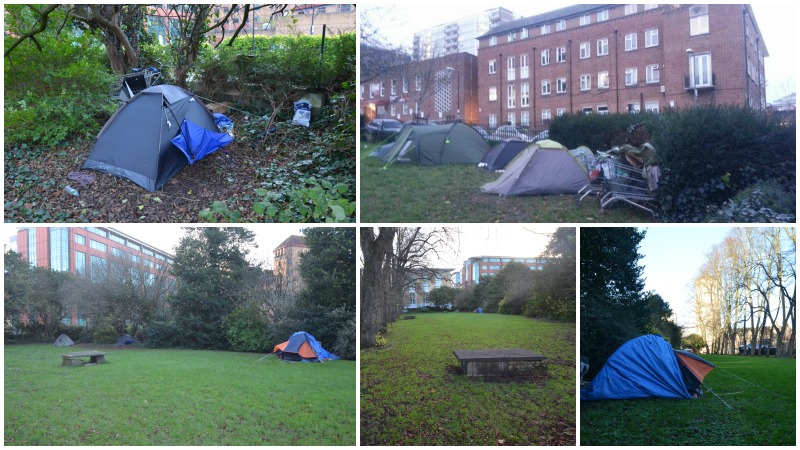 Legs bound by a thin duvet in the doorway of St James’ Priory, Ryan David looks out from knee-height at the sea of legs rushing to and from the nearby bus station.

Ryan is sitting yards away from St James’ Park, where a small encampment of tents were pitched by rough sleepers to keep out of the inevitable November downpours until a few days ago when they were removed.

Authorities here and across the city centre are tackling an unprecedented surge in street sleeping which has seen at least five more similar makeshift camps pop up and disappear in recent weeks.

A petition is piling pressure on the council to open up empty buildings in the city to offer refuge from the freezing nights and the violence and drugs which come with life out in the open, in the latest bid to spread the safety net further for the growing numbers of homeless which has reached a peak not seen here since the 1990s.

Ryan, who grew up in Brentry and Southmead, became homeless at the age of 16, after leaving his foster home to live in a shared house. “Too immature” to be left to his own devices he tumbled into a life on the streets, falling in and out of temporary accommodation and was left begging in doorways like this.

“There seems to be more and more sleeping out now, you can see it,” he says. “There’s not enough places for people to go anymore.”

It’s an observation not entirely wide of the mark, according to David Ingerslev, manager of the Compass Centre homelessness support centre on Jamaica Street in Stokes Croft.

Homelessness has hit a peak across the UK but the problem is “particularly acute” in Bristol, David says. “The last time we saw numbers like this were in the 1990s. Over the last three months it has been particularly intense,” he adds.

“The fact is more and more people are becoming homeless,” he says, citing spiralling property prices, changes to benefits and the housing crisis.

The St Mungo’s Broadway charity he works for, which runs part of the Compass Centre, estimates there are around 50-70 rough sleepers on the street every night – three times higher than two years ago. Meanwhile between 400-500 families present themselves as homeless or at risk of becoming homeless every month.

The council pays other organisations such as the Salvation Army to provide 1,100 places in a range of temporary accommodation, including flats above the Compass Centre.

“Even with all that going on and millions of pounds being spent, rough sleeping has increased because it’s not meeting the growing needs,” David says.

However, it is not that simple. Yes, Bristol is experiencing its highest levels of rough sleepers in well over a decade, but people are not yet being turned away from services, he insists.

The council has a duty to house anyone who come to them without anywhere else to go. Services commissioned by the council will engage with all who turn up in destitution. But the basic levels of support and number of bed is creaking under the pressure.

The problem is jarringly visible in King Square across the road from the Compass Centre, where tents have popped up and disappeared in recent weeks.

David Ingerslev, manager of the Compass Centre and a makeshift camp outside which has since shrunk. Picture on the right from Paul Saville

The makeshift camp here is one of a handful spotted across the city over the last month, including in Castle Park, Temple Gardens, Sparke Evans Park, along the river Avon towpath in St Philips Marsh, against the walls of Pip ‘n’ Jay church and in St James’ Park. Police told Bristol24/7 many have been dispersed using ASBO legislation due to complaints of disruption.

On the way out of the Compass Centre we meet Peter Smith. Until the last few days, he was a temporary, roaming resident at a few of the camps where what was left of his property was stolen as he slept.

After losing his job as an IT specialist in Aztec West, the contract on the 34-year-old’s house soon followed and he took to the streets on September 10.

“It was crazy. There are plenty of homeless people out there and we are spread across the city. We are vulnerable and it is pretty much like a jungle out there.”

Through fellow rough sleepers, he found his way to the Compass Centre where he is now volunteering in the kitchen while living in temporary accommodation through the Salvation Army, paid for by the council.

“I want to use my experience here to turn my life around,” he says in the warmth of the shelter’s reception where rough sleepers and the homeless come in and out all day.

Laura Hounsom delivered a 12,000-strong petition to George Ferguson at a cabinet meeting on Tuesday

A petition to help the council meet the growing demands on the streets by opening up empty buildings reached more than 12,000 signatures in a week and landed on the desk of mayor George Ferguson. Bristol’s mayor voluntarily sleeps rough once a year to raise money for charity and awareness about homelessness.

Laura Hounsom, who delivered the petition, admitted the plan was not a long-term solution: “It could be a lifeline for anyone suffering the dangers of homelessness. It is a start, a potential first step in the process of helping people off the streets altogether.”

Ferguson has already set up a taskforce with homelessness charities including St Mungo’s and local police where the option of opening empty buildings has been raised.

“I have asked that we explore the potential use of empty buildings in the city,” he told Bristol24/7. “Although it may seem simple to some, it is in reality a complex matter and we cannot just sweep people off the streets and put them in unserviced warehouses.”

David at the Compass Centre agreed that the buildings must be appropriate – with running water, toilets and services – and must be supervised by professionals.

A telling example of what can happen without proper systems in place is a recent squat in the old probation offices in St Paul’s which descended into chaos with attempted murders and an unhealthy lack of sanitation.

Ryan, begging in the doorway near the bus station, saw the mess first hand and is cautious about the petition. “There needs to be the right security and services to make sure the same things don’t happen again. It turned into madness. It is a sad truth that people always fuck it up,” he says.

He adds that even the official services like what is on offer in the Compass Centre are sometimes too chaotic for vulnerable rough sleepers. “I don’t want to go to another hostel,” he says. “It’s intimidating, there’s a lot of vulnerability. You have to watch you back sometimes with the kinds of people and drugs which are there,” he says, admitting he has no plans to return to official help to get himself out of a life on the street.

Aside from the petition, another idea to help meet the demands of the growing homeless community has come from Conservative Party mayoral candidate Charles Lucas.

Having volunteered on soup runs regularly in Bristol over the past year, the property developer and wine merchant says he has seen many peaks but admits there has been a “gentle increase” over recent months in the numbers on the streets where he dishes out food.

His idea is for the council to tax major developments (through the existing Community Infrastructure Levy) in the city and use the money to pay for more shelters and hostel beds. “I just think in a city like Bristol there shouldn’t be homelessness like this,” he tells Bristol24/7.

The irony is that some people blame the current Conservative Government for escalating the homelessness crisis by cutting benefits, contributing to the property bubble through cheap mortgages and slashing local authority budgets.

The assault on housing benefit has been unrelenting over the past five years,” says Kevin Garvey, from homelessness charity Shelter, attacking Chancellor George Osborne’s latest spending review. “Vital parts of our housing safety net – which make up ordinary families last line of defence against homelessness, poverty and desperation – have been significantly reduced.”

Lucas stresses he had met with Shelter in his campaigning to tackle homelessness in Bristol, but said he backed Osborne’s mission to reduce the deficit. “We’ll never eradicate the problem if we don’t balance the books,” he says.

Back in the shelter of the St James’ Priory doorway, an elderly couple hand Ryan two clingfilm-wrapped rolls as they pass, stooping down to tell him they were going to eat them for lunch but have decided to go into a cafe instead. They head on past Greggs, where dozens of people file in and out with hot pastries.

“There may not be enough places to sleep, but if you’re homeless a lot of the time you’ve fucked it up for yourself,” Ryan reflects after thanking the couple.

“The answer is never easy,” he says returning to the petition. “Leaving people to their own devices either way is too often a recipe for disaster.”

Pete Smith’s name was changed to protect his anonymity.

Look out for Bristol24/7’s artist of the month on our website, where featured artwork will be raising money for St Mungo’s Broadway