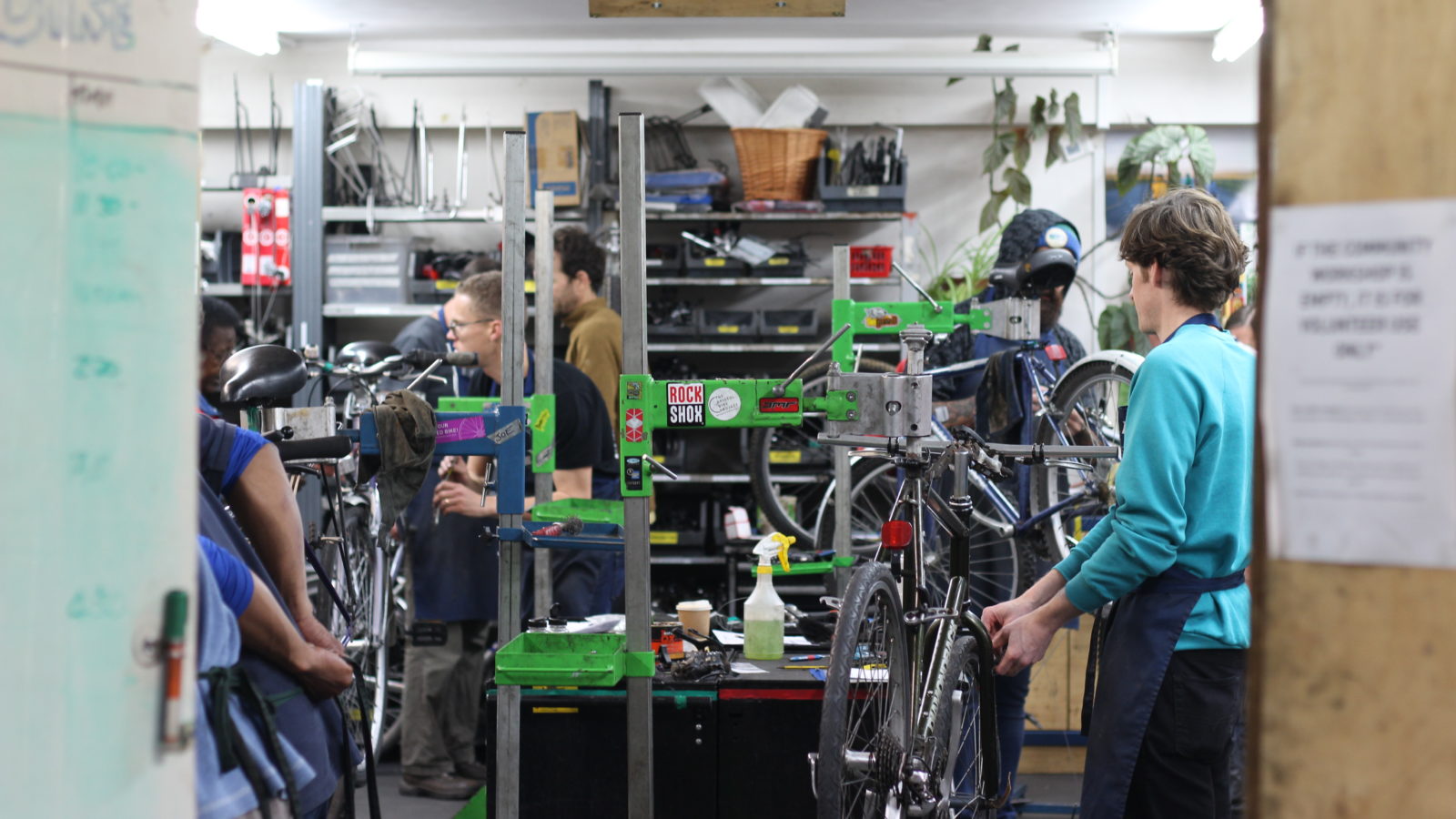 Bristol Bike Project began as an idea between friends James Lucas and Colin Fan, who co-founded the project after spending four weeks cycling around Scandinavia. Inspired by the freedom and independence of travelling by bike, they returned to Bristol wanting to run a project with a community focus.

After putting up posters asking for unwanted bikes, they began to be inundated with offers, and struck up a relationship with Bristol Refugee Rights to offer free bicycles to new residents of the city who really needed a reliable method of transportation.

Ten years on, thousands of donated bicycles have been refurbished and given away through various programmes, and the project has established itself as a self-funding community business based out of Hamilton House. However, with the ongoing redevelopment of Hamilton House, the future of the project looks less certain than it did a year ago.

Here are three people from the project to explain the affect it has had on them: 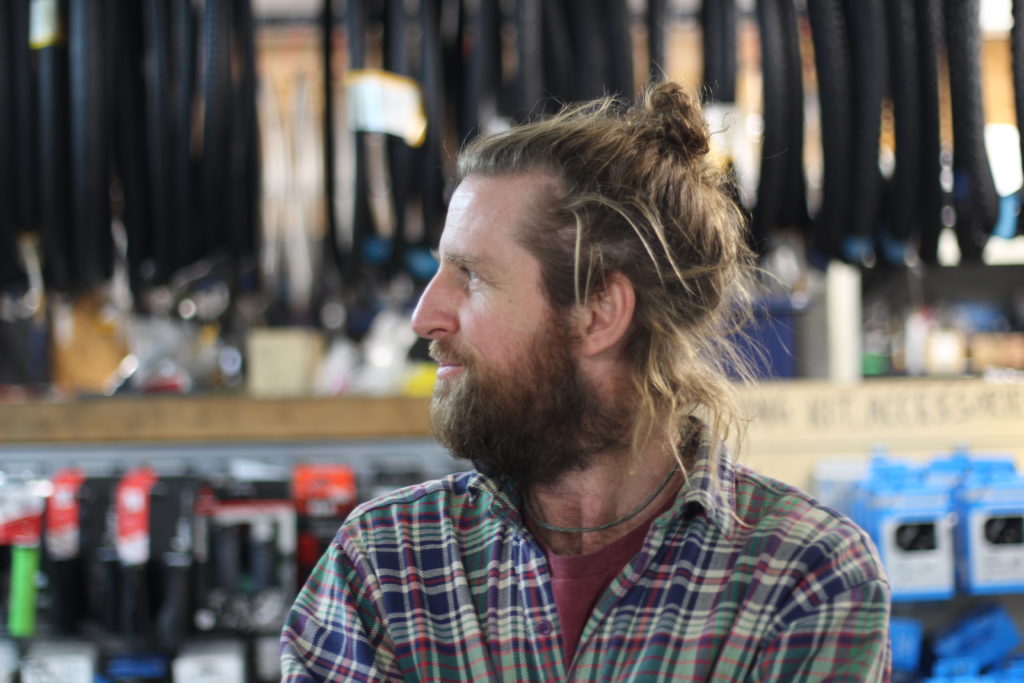 “In 2008 was volunteering at Bristol Refugee Rights and identified a group of people for whom having a bike would really matter to them. I was putting two days aside every week to fix them up and worked with people at Bristol Refugee Rights to get the bikes out there. After a few months we realised we needed a workshop space: at one point I was living in a bedsit in St Paul’s with about 15 bikes, climbing over them to get into bed at night because I had nowhere else to store them.

“We found this space in Hamilton House in 2009, and we were one of the first tenants. Since then the project has grown and we’ve taken on more space, and Coexist have been very supportive throughout that period.

“Bristol is a really good city for this sort of thing. A lot of people ride bikes, plus there’s the recycling and reuse element. People are interested in being green and there’s a lot of people in the city who are up for volunteering their time. It’s a fabulous city to run a project like this.

“There are numerous ways in which we can affect someone’s life by giving them a bicycle. On one hand it’s a very utilitarian, functional vehicle for getting around. If you can’t afford a bus pass or a car, being mobile in the city can be quite a challenge. Having transport allows you to stay connected to friends and family, attend appointments and get to college and volunteer work.

“Then there are the physical benefits and mental wellbeing: people get referred to us through mental health groups for the functional side of being in a safe space and socialising with other people.

“At the start I didn’t realise the extent to which a bike could help people. Little by little it dawned on us that we could make a real difference – in more ways than we’d realised.

“In the last 18 months, with all the uncertainty surrounding Hamilton House, it’s been tough. It’s looking increasingly likely now that we’ll lose the space and we are looking at other properties and seeing what’s out there. It’s not set in stone and it could change, but we definitely need to start planning.

“Everyone is committed to keeping the project going, even if we have to move out of this space. This is an amazing location for us in so many ways, so it will be a hard to move out. It’ll be a challenge but hopefully we’ll find another appropriate space and go from strength to strength.” 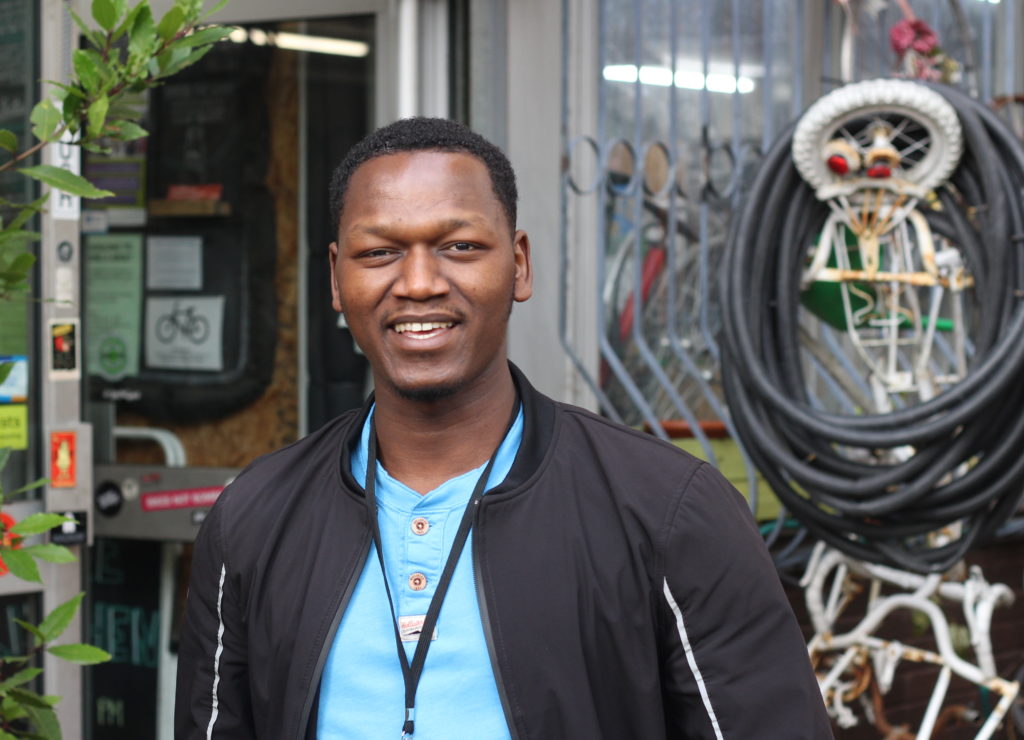 “I’m a refugee and I volunteer with Bristol Refugee Rights as an IT teacher.

“Three years ago I got my free bike from Bristol Bike Project and it really helped me a lot, because I used to live almost an hour and 20 minutes from St Paul’s, where Bristol Refugee Rights and Bristol Bike Project are based, and I used to walk. So when I got the bike it was only ten minutes. It was amazing. The bike helped me to go to work when I started doing my first job.

“I love to see people doing something generous like this. And it’s free as well: people come to the country with no source of income and they don’t have money. They can’t afford to buy a bike, but here is this organisation giving them one for free. With a bike they can do their daily life activities, and that’s amazing.

“I recommend this to everyone who would be lucky enough to get a free bike. One of the benefits is that you can bring your bike in and repair it, and do whatever you want for free.

“We have bikes back home but it’s not like in England. When I came here, I understood for the first time the benefit of having gears to make it easier going up hills. In my country you just go straight!” 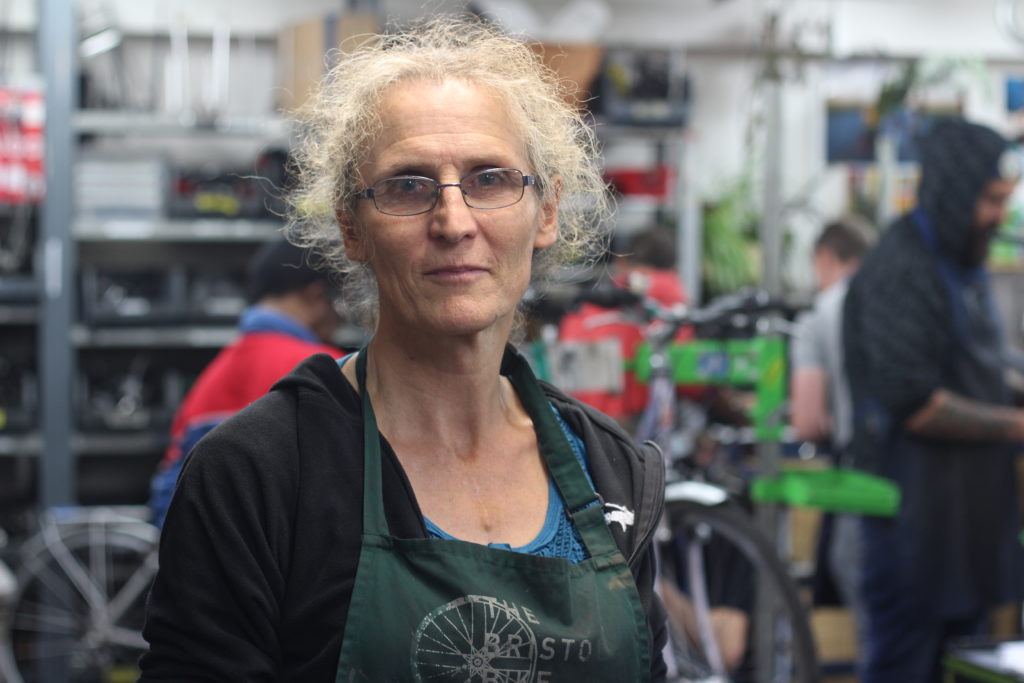 Debbie Vincent has been volunteering in the workshop for nine months

“I’ve been volunteering here for about the past nine months. I’ve always tinkered around with bikes. We get all sorts of bikes – some are more useable than others. We stockpile spare parts, so any bike that we can’t actually use, we strip down and use as many parts as we can. Anything from nuts and bolts to wheels, washers, tyres.

“We try to make sure that the bikes we give out are fairly good quality. We have a check sheet to start off with: we assess the bike to see whether it’s worth working on, and then we go through the whole bike, checking all the bearings, the working parts, the cables. It’s all done so that when people come for a bike, they know that the bike they are getting is going to help them.

“I think this year, so far, we’ve rehomed about 200 bikes and also done repairs on about 600 or 700 bikes. Every Wednesday, when I volunteer, we can do between 20 and 30 repairs, so that adds up over the year.

“I’ve always worked with co-ops and things. I like doing voluntary work. It’s very rewarding. You learn new bike skills and obviously get to meet a new group of people. I’ve always known that I’m privileged and lucky in my situation, so to give back to people that are so much worse off is rewarding. It’s just something simple like some cheap transport but it can make a huge difference to their lives.”

Find out more about Bristol Bike Project at www.thebristolbikeproject.org