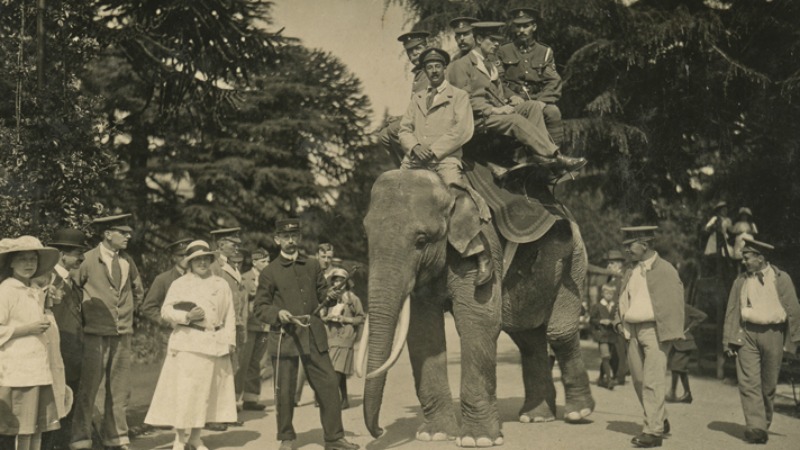 Bristol Zoo Gardens is the fifth oldest zoo in the world and first opened its doors to the public on Monday 11 July 1836.

Since then it has helped save over 175 species from extinction, showed round 40 million school children and has welcomed more than 90 million visitors.

Meet some the Bristol Zoo team who look after hundreds of animals and the half-a-million people who come to see them every year.

Senior curator John Partridge is almost as much of a Bristol Zoo institution as the animals he looks after. He’s worked at the zoo for 40 years and has seen huge changes at the site.

In his career he has worked with some of Bristol Zoo’s most famous animals including Samson the gorilla and his career highlights include “taking Wendy the elephant for a walk around the gardens to meet everyone”.

Working with animals is a full-time commitment, something he is eternally grateful for his wife and family for putting up with. “Once one of the elephants was ill and I didn’t go home for three days,” he says.

But he wouldn’t have it any other way: “It’s an amazing job. It never got boring, you just can’t get bored working with the animals.”

In his long career choosing a favourite animal could be tricky, but for John the orangutans who lived in the zoo in the 60s and 70s stand out: “They may look slow but they were working out how to destroy everything!”

How do you book a gorilla a ferry ticket? Bristol Zoo registrar Sarah Little is just the woman to tell you as she spends most of her day organising the transfer of animals from zoos across the world.

“There is usually quite a stunned silence on the other end of the phone when you say we’d like to transfer a gorilla by ferry.”

“We have about 200 transfers a year,” she says. “Most of the transfers are stud book recommendations. There are committees of people who look at a particular species and decide what need to go where – mostly for reproductive management but also for management of populations.”

Patience and an eye for detail is paramount in her job. “All the paperwork is there to protect the animal and to make sure they are safely and legally acquired,” says Sarah. “When Sabrina the aye- aye came over it took nearly a year to do the paperwork – which is crazy.”

Favourite animal: “I really quite like invertebrates and I like the blue ornamental spider in bug world – it’s absolutely amazing. We brought one over from Seattle in America last year and it was great.”

If you’ve been to Bristol Zoo it’s quite likely that you’ve met Carrie at some point. She’s been the receptionist for the past 12 years, dealing with every question, query and problem imaginable: “I deal with phone queries, email queries and staff queries.”

“No two days are the same but the best thing is helping to make someone’s day out a little bit better,” she says.

Carrie has seen staff coming and going over the past 12 years but there is a bonus of having “friends all over the world now, because they have gone to different parts of the world to do zoology.”

Favourite animal: “Years ago we used to have a pelican called Billy. He loved people and he often used to come out of the lake and come and socialize with the children – he was one of my favourites.”

Getting stuck in is part of the job description for development officer Kate Smith. From organising huge fundraisers to wooing corporate sponsors, she’s part of a team responsible for bringing in around half-a-million pounds a year to fund the zoo’s conservation and education work.

“We can’t continue doing what we are doing without bringing in the money,” she says. “What we do day-to-day is just nuts…One day we’ll be on the main lawn with the public on rowing machines, the next day I could be sat in a meeting with a corporate presenting a long-term strategy for conservation of giraffes.”

It’s not just donations and sponsorship that Kate coordinates, she also looks after gifts-in-kind: “We had a corporate which donated us a huge water pump…for us it was a massive update for seal and penguin world.”

Favourite animal: “I love the Okapi – they are just amazing and stunning. It looks like an animal that a child would have drawn that has come to life.”

Looking after the beautiful zoo grounds is a team of gardeners, managed by head of horticulture Eddie Mole.

He’s been at the zoo since the early 90s and has overseen much of the current garden designs and landscaping in the animal enclosures.

“It is a very compact site with lots packed into it and it is very intensively used, so there is lot of repair work which goes on the lawns and on the beds to keep it looking good,” he says.

The team don’t just look after the gardens – they supply about 10% of the fodder for the animals, growing much of it at the nursery at Wild Place near Cribbs Causeway.

“We are able to give the year round variation in what the animals eat,” says Eddie. “We try and grown things which are difficult to buy or very expensive to buy.”

Favourite animal: “I do like Archie the armadillo – he is just the coolest animal ever.”

The zoo is actively involved in training the next generation of conservationists and educators in its new education centre. With thousands of wildlife and conservation students studying for degrees and masters the library is a hive of activity.

Looking after it all is Laetitia Delaleuf. When she’s not in the library she is also working on an archive project for the zoo.

“The society was established in 1835 which makes it one of the oldest zoos in the world,” she says.

“We have really important documents from the beginning of the zoo in the archives including lots of artefacts, drawings and architectural plans. Being a city zoo everyone has lots of memory of it and people are really interested to see our archives,” she adds.

Favourite animal: “I can see the tapir from my window – and stay in the warmth!”

Central to the zoo’s philosophy is conservation education and Rachel Topley is one of the people who teach dozens of school groups every week.

The zoo runs 50 different education sessions, including rainforest, mini beasts and habitats. Rachel teaches in purpose-built themed rooms in the education centre or takes the animals out on the road with her, as part of the zoo’s outreach programme.

“Children love it and are so excited and overawed by what we have here. Especially the animals – they get hold, stroke some of them during the sessions.”

A zoology graduate she has worked at the zoo for the past two years: “I find it really, really rewarding when group of kids come in and I can give them something back.

“I try and make them more aware of what goes on in the world and the threats that animals face and how they can help. You can send them away with the tools to make a difference in their life.”

Favourite animal: “The Columbian rainbow boa we have called Stan – he has a good hard grip on him when you pick him up.”