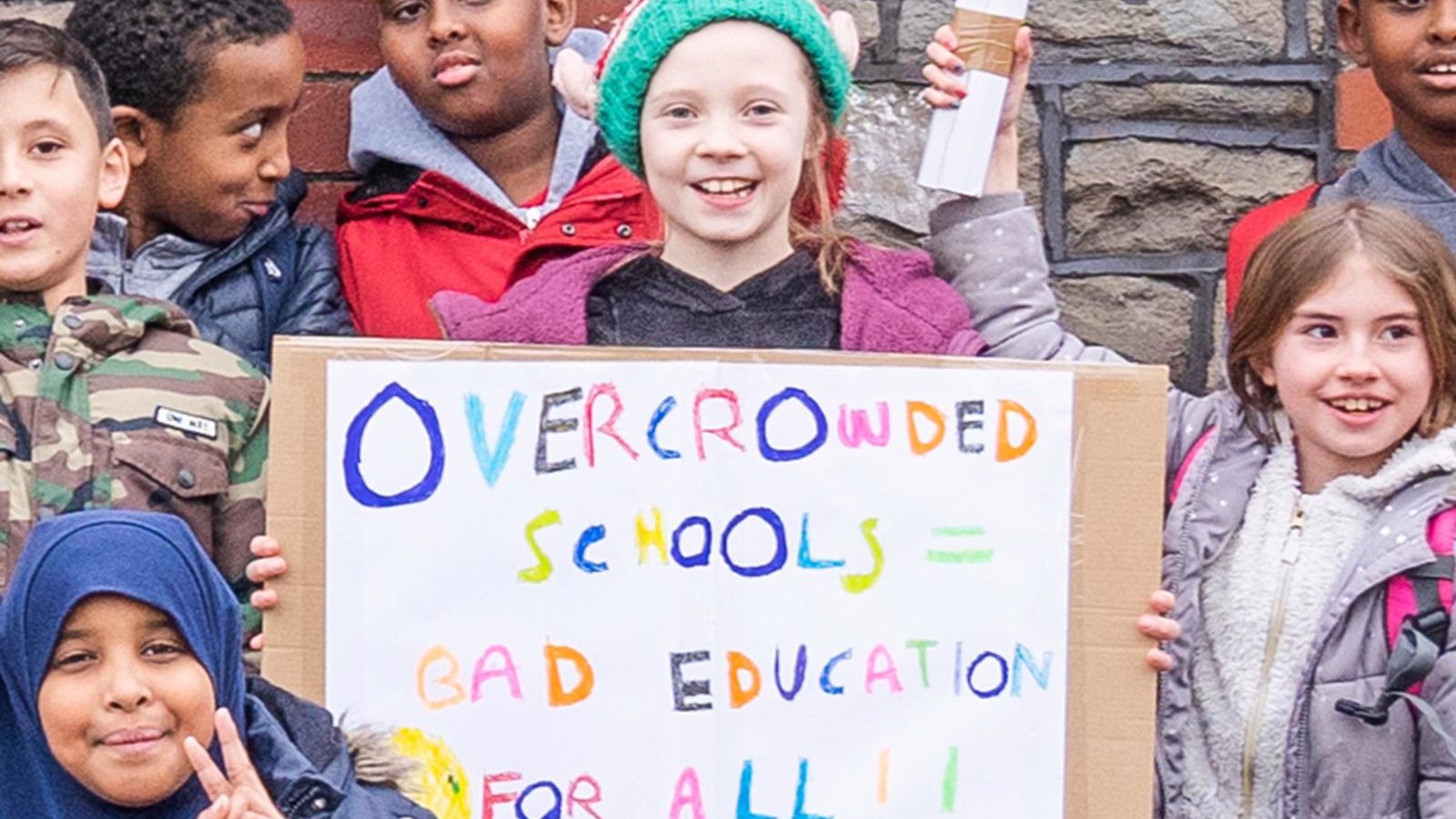 Secondary schools in East Bristol will have to find 170 additional school places for 2021 now that the Oasis Temple Quarter Academy will not open in time, due to concerns about flood risks. Bristol City Council is now working with the Cabot Learning Federation to create additional places.

But parents and campaigners from BS5 Secondary Education Forum say they are concerned about the quality of education children will receive through expanding existing schools, and feel that children have been let down.

At a neighbourhood conversation, organised and hosted by Eastside Community Trust on Wednesday, October 21, Labour councillor for Easton  Ruth Pickersgill said she wanted parents in East Bristol to understand their options before the admissions deadline on October 31.

Pickersgill highlighted the importance of parents applying for at least one school in their catchment area: “So many parents will put down three schools that are not in their catchment area, where they are unlikely to get a place and then they end up having to send their kids to a school that is miles away.” 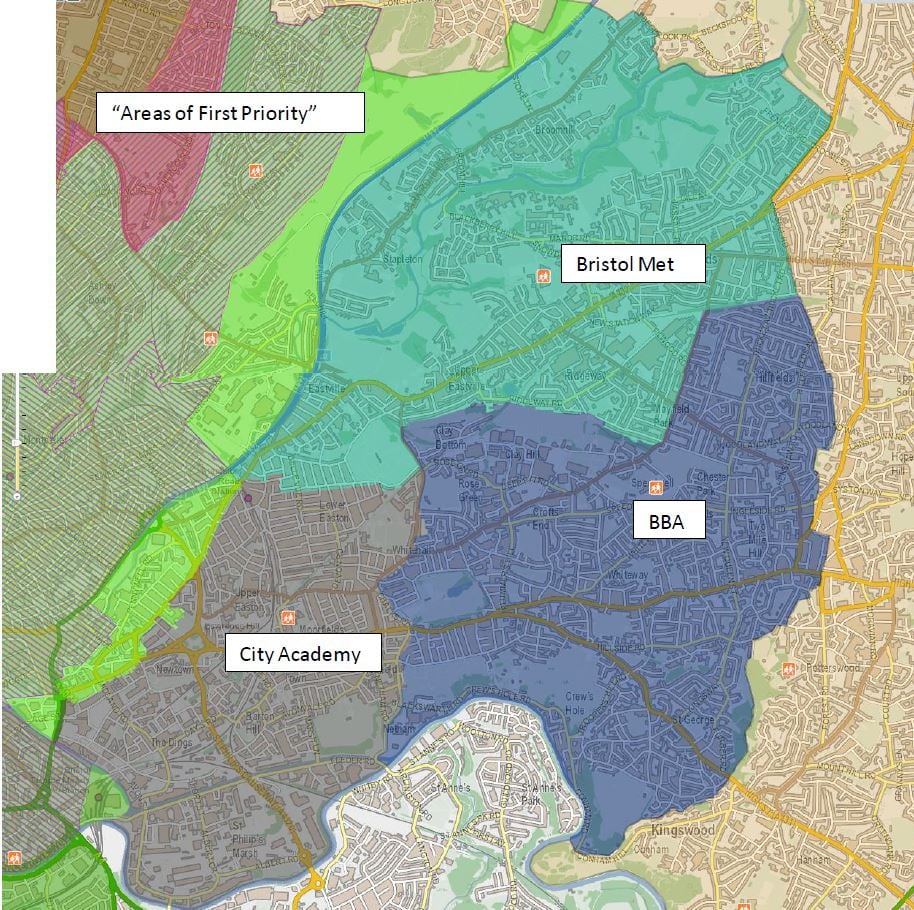 Cabot Learning Federation has three secondary schools within the East Bristol catchment area: City Academy, Bristol Metropolitan Academy and Bristol Brunel Academy (BBA). Steve Taylor, CEO of the Federation, says that between their three local schools they will be able to provide 138 additional places. BBA will be expanded by the conversion of the Old Fire Station in Speedwell into a post-16 centre. Trinity Academy, in Lockleaze, will also be expanding as a temporary measure.

Additional pupils will be accommodated through the use of existing buildings, and moving pupils to the new post-16 site. “There has been investment from the Local Authority into outdoor space at BBA,” Taylor added.

However, in terms of the additional teachers that are to be employed, Taylor was unable to provide a figure at this stage. He went on to say: “It is rare to have class sizes of over 30 and will still be rare in the future but we cannot guarantee that there will not be any classes with over 30 pupils.”

Fears were also raised about the coronavirus risks if class sizes were made larger. Taylor insisted that although Year 8 pupils from BBA have recently been sent home due to a positive test result, “the school’s internal tracking can prevent whole year groups from being sent home”.

Jenny Grinstead, a parent and core member of BS5 Secondary Education Forum, says that though her questions were addressed, she still doesn’t know what secondary school will look like for her son. “Cabot Learning Federation are trying to deal with a difficult situation that is not their fault, but I wasn’t reassured by the meeting as Steve Taylor was unable to provide figures (about increasing the number of teachers to cope with more pupils),” Jenny says.

“If they can get the old Fire Station in Speedwell converted into a post-16 centre that would be a decent solution, but they were pretty clear that this was a longer-term plan and would not be ready in time for 2021.

“What happens in the short term to the children, like my son, going to secondary school in 2021? It seems like they are simply going to be cramming extra pupils into existing schools, and it is unclear what that might look like.

“At this stage, parents deserve more information. We still have many questions.”

According to BS5 Secondary Education Forum, they have repeatedly been refused involvement by Bristol City Council and the Department for Education’s working group around the issue of secondary places. Jenny says this means the working group currently has no community involvement. 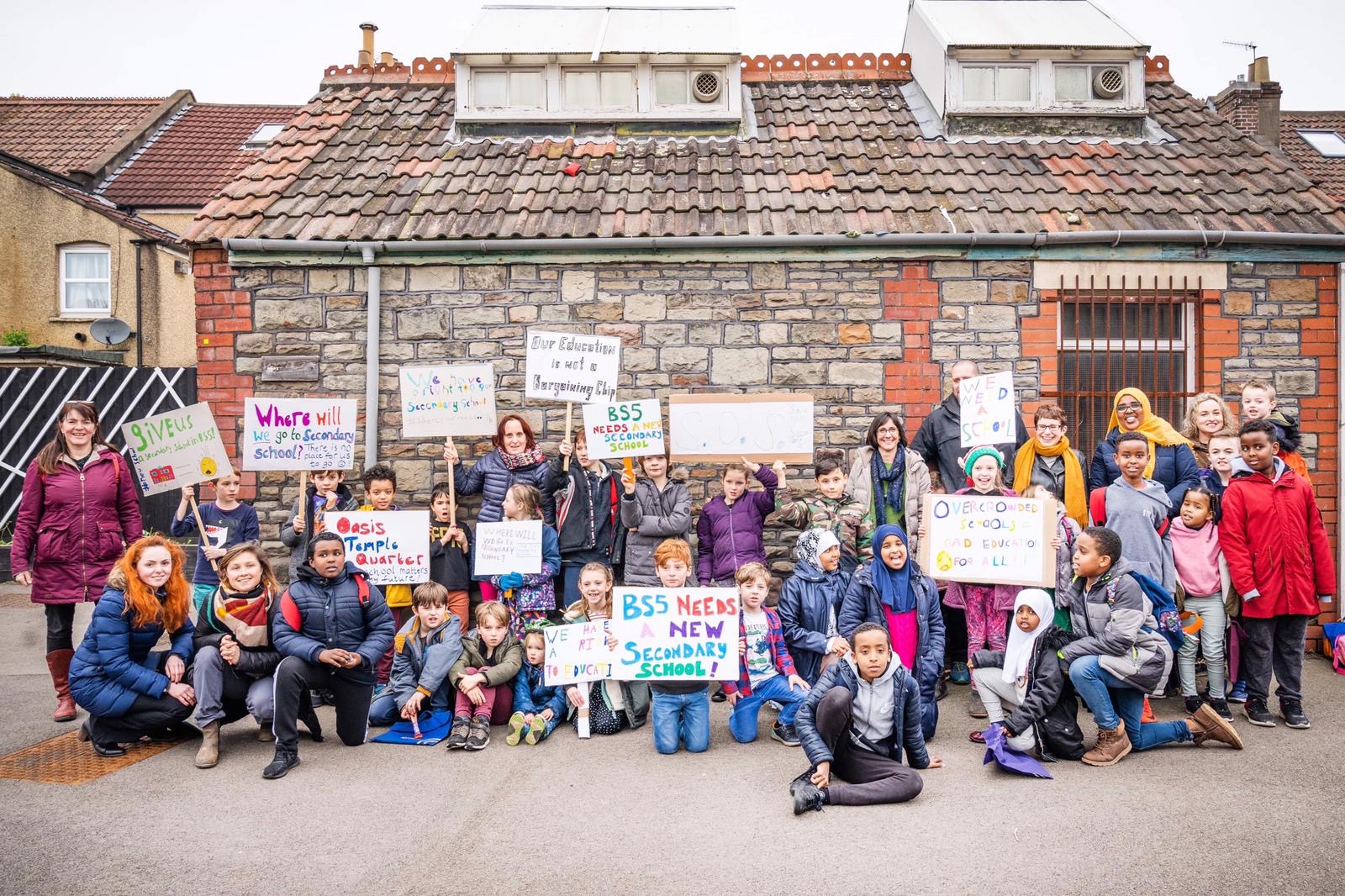 Parents and children campaigning for a new secondary school. Photo by Evoke Images

Amy Harrison, another founding member of the local parents’ campaign group, says that although the council has a statutory requirement to provide school places, they no longer have the same power to directly build new schools to meet local needs. Oasis Temple Quarter is due to open as a ‘free’ school, meaning the Department for Education holds most of the decision-making power.

“The system is complex, fragmented and lacks transparency,” she says. “I feel fortunate to be reasonably politically literate and to have some social capital, so I feel it’s important to campaign on behalf of those parents in our community who feel they have less of a voice. Why should you have to fight for a school place for your child just because you live in Lawrence Hill ward?

“This is about an ongoing national political agenda to move schools out of Local Authority power, and I believe that can take power away from local communities. Ultimately, the complexity around the Oasis Temple Quarter Academy is also due to it being embedded within a larger private development.” 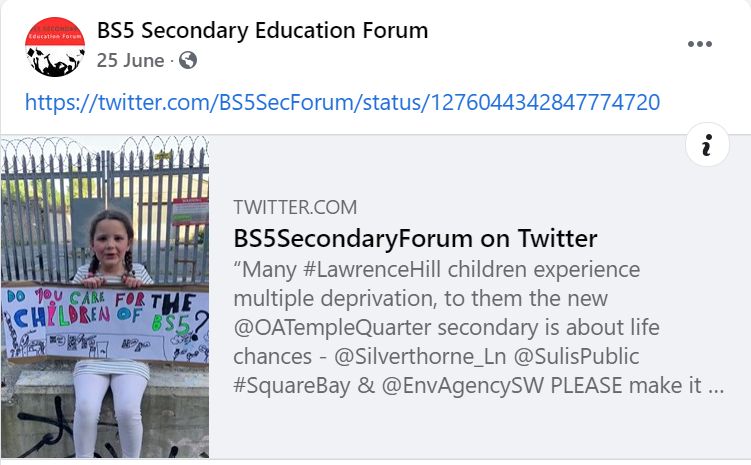 Amy and Jenny have been active around this issue for over eight years, when they successfully campaigned for the opening of Redfield Educate Together, to meet the shortfall of primary school places. They managed to get this new school build within 20 months.

The failure to open Oasis Temple Quarter will be faced at an upcoming scrutiny meeting. BS5 Secondary Forum say they will ask questions about how the council failed to open a school on time to meet pupil demand, despite being aware of a shortfall in secondary school places in East Bristol for over seven years.

“We feel there has been a lot of covering up,” says Jenny. “We want to know what the council has done with the Basic Needs funding they are given by the Department for Education to build schools. It is the transparency that bothers us a lot. Everyone would feel better if they were given clearer explanations.”

Bristol City Council have not yet responded to our requests for a comment.

The deadline for 2021 secondary school applications is midnight on October 31. To apply, visit: www.bristol.gov.uk/schools-learning-early-years/secondary-apply