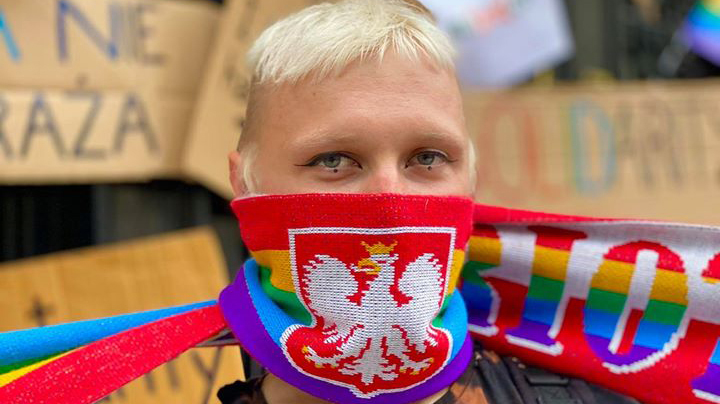 Hate against LGBTQ+ people in Poland is increasing, and Bristol is showing solidarity with those under attack.

YOU WILL NEVER WALK ALONE: Stand In Solidarity With LGBTQ+ In Poland is taking place on Tuesday, August 18 from 6pm to 8pm in a stand against violence in the country.

The march will be peaceful and aims to raise awareness of the situation, which has been escalating quickly since August 8, 2020.

“The situation of the Polish LGBTQ+ community has been steadily deteriorating over the past five years of right-wing rule,” say  Weronika Dw, Agnieszka Kowalska and Marcin Gawin, organisers of the Bristol event.

“The current government has been practising homophobic rhetoric that resulted in the rise of hate crime directly targeted towards the LGBTQ+ community. According to ILGA, Poland is the most homophobic EU country.” 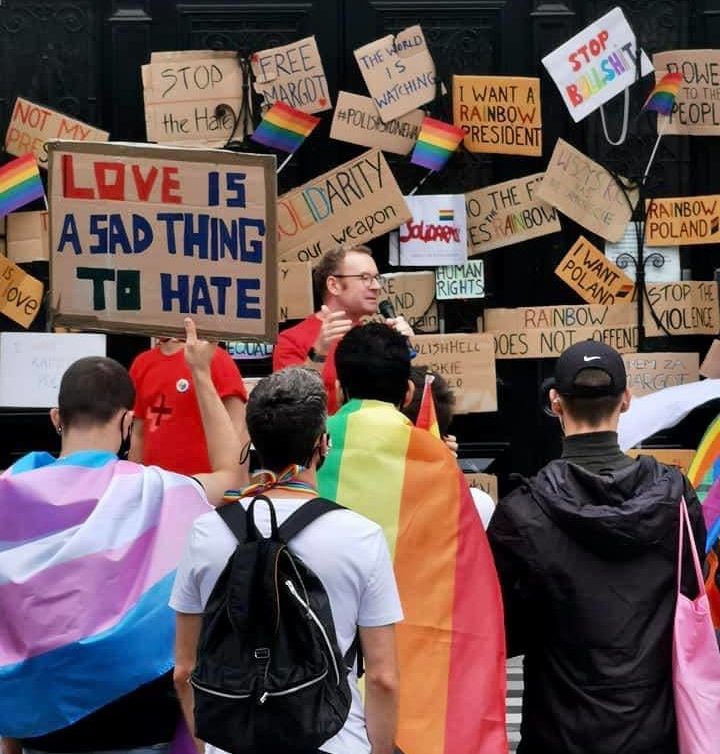 FARSA Feminists Artywists Society in Action protested outside the Polish embassy in London on Sunday, August 16. Photo: All Out

Since 2019, around 100 Polish municipalities have declared themselves “LGBT-free zones,” a newspaper has distributed stickers with inflammatory slogans and a crossed-out Pride flag, and participants at a Pride march in the city of Białystok were attacked with stones and bottles by nationalists and far-right groups.

Since the re-election of president Andrzej Duda in July 2020, attacks have worsened, with activists being arrested and violently “pacified” by the police, for acts such as holding a rainbow flag.

On August 8, a protest related to the “preventative detention” of Margot Szutowicz, an LGBTQ+ activist, saw police violence towards protesters and nearly 50 people detained. 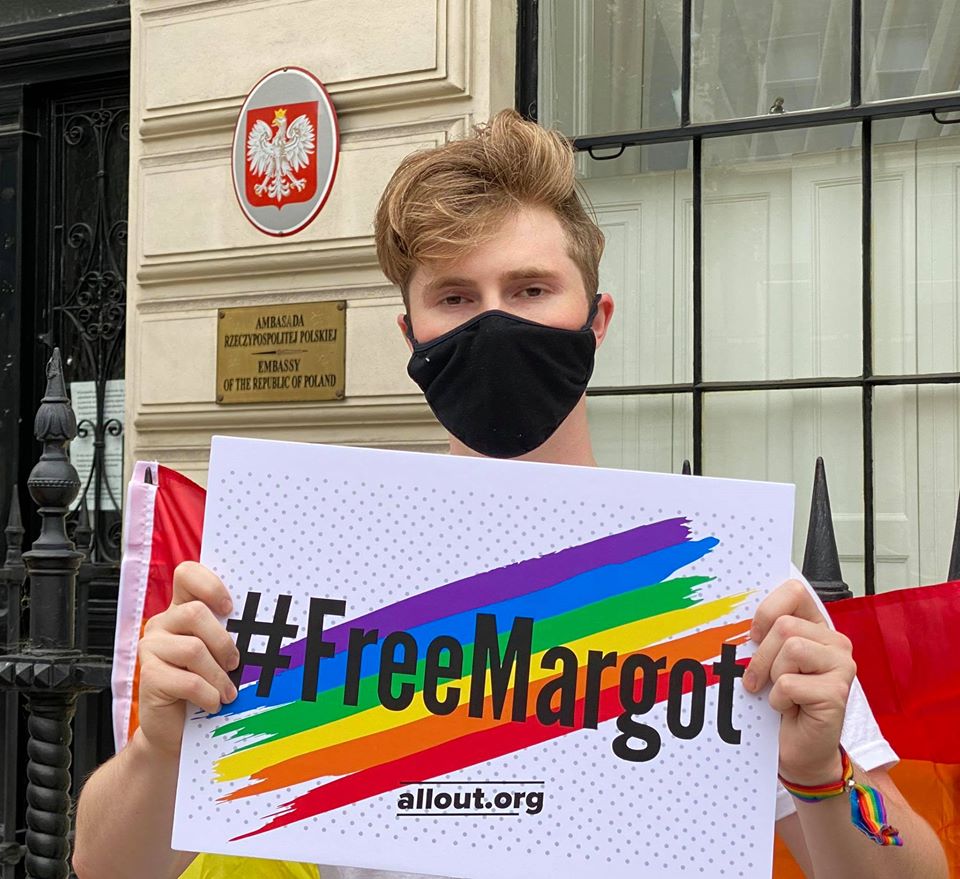 Campaigners are calling for justice. Photo: All Out

“The unrest in Warsaw on the 8th saw shocking levels of police violence, even for the new standards in Poland,” say organisers of Bristol’s protest.

“Witnesses reported that the police threw people around ‘like a bag of potatoes’, detained random individuals, apparently including non-involved passers-by, injured many others, kneeled on peoples’ necks, kettled the demo, and snatched people from the crowd.

“For many hours, the cops were preventing the arrested from seeing their lawyers, moving them from station to station, refusing to give any information to their loved ones, friends, and lawyers and generally doing their best to obstruct any support actions.”

Bristol’s show of solidarity is part of a global movement to support Poland’s queer community, with organisers saying “these developments serve as a sobering reminder that we must stay vigilant in the fight for the human rights of LGBTQ+ people”. 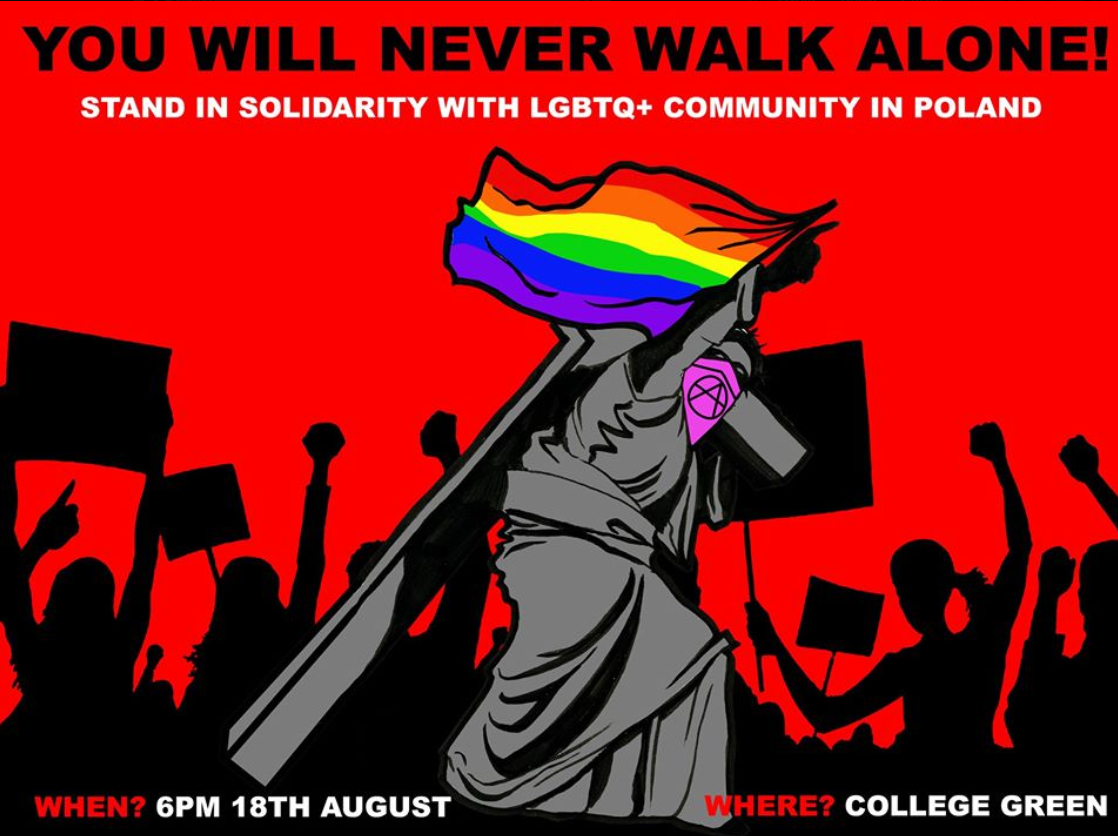 A demonstration of solidarity takes place on Tuesday evening. Image: YOU WILL NEVER WALK ALONE: Stand In Solidarity With LGBTQ+ In Poland

The demonstration will be held on College Green and hopes to educate, raise awareness, offer a space for Polish queers and fundraise for Polish LGBTQ+ groups.

Protesters are reminded to wear a face mask, bring hand gel and keep a safe distance from one another. Flags, signs and banners are encouraged.

Main photo: All Out