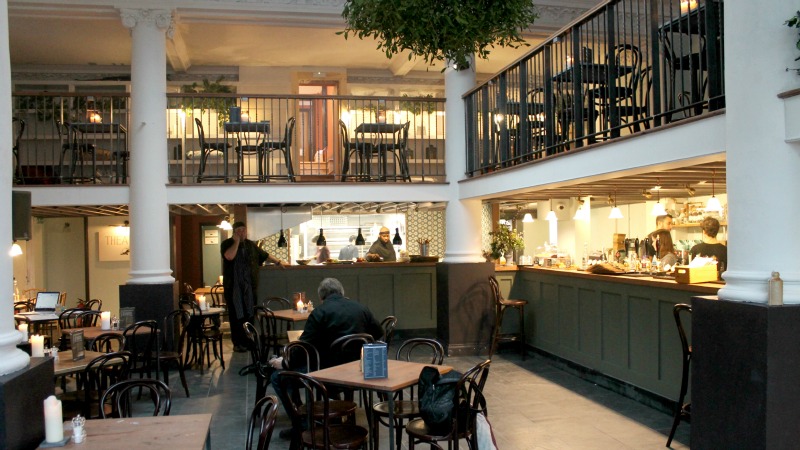 Warm sourdough arrives on a small chopping board soon after I place my order at The Old Market Assembly. It’s been made by in-house baker Sanjay Patel, formerly of Mark’s Bread, whose bakery doesn’t officially open until Friday but is already busy baking in one corner of the kitchen.

It’s just one of the disparate elements that make up this former bank that now encompasses a restaurant, bar, cafe and live music venue as well as being the new home of the Wardrobe Theatre, previously found above the White Bear pub in Kingsdown.

The dining room is lit by natural light from an octagonal dome dominating the ceiling, with more seating on a mezzanine level accessed by a staircase covered in foliage.

More light comes from the huge front windows. In one corner a wood burner emits a red glow, nearby is the semi-circular raised stage area where live acts will be playing each and every night. For free too, just like the Old Market Assembly’s sister venues The Canteen on Stokes Croft and No. 1 Harbourside underneath the Watershed.

My chicken broth (£8), with generous shreds of grilled chicken and matzo dumplings, soon arrives in a steaming bowl. What remains of Sanjay’s bread is perfect to dip in to soak up the juices.

It’s served with a side of sliced pickle and crispy chicken skins, with these extras giving the short menu divided into vegan, vegetarian, fish and meat, and sandwiches an extra dimension.

Executive chef here is Scott Hislop, whose CV includes stints at The Old Bookshop, The Spotted Cow and the cafe at Windmill Hill City Farm.

As I slurp the broth and its wonderfully rich sauce, the tables around me start to fill up with two couples both content simply to order cappuccinos.

As a cafe, the Old Market Assembly will soon open from 8am as the business becomes an all-day operation, a roof terrace due to be christened before the end of the year in a building with many a hidden corner to discover.

At the bar, there are beers on tap including from the New Bristol Brewery and Arbor, a dozen other draught lagers and ciders including Stickleback made in Pilton, bottles from the likes of Wiper & True and Bristol Beer Factory, a well-stocked back bar, and homemade quiches and cakes taking up space near the till.

The dining room is filling up for lunch. Then there is a crash as half a mistletoe tree falls to the floor – an unexpected element of theatre even before the Wardrobe has opened its doors for the day.