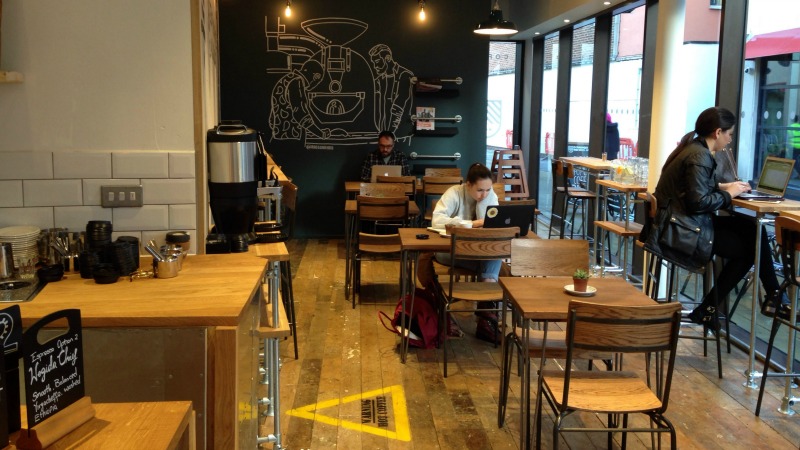 “This one is more chocolaty and caramel, and the other is more fruity,” explains a barista in thick-framed glasses to a new customer.

Two single origin selections from Ethiopia are the current choices of coffee at Department of Coffee & Social Affairs. Roasted at their own roastery, they can be drunk in or bought to take home as beans or Nespresso-friendly capsules.

Next to their tasting notes on the counter is a pile of the business’ social impact report – an unusual addition to the items here but one which gives an indication that this place is much more than just a cafe.

Hidden away in Quakers Friars to the side of Brasserie Blanc and the newly opened L’Osteria, its unpromising location wasn’t deterring new visitors on Tuesday morning, most after a takeaway but a few remaining inside to tap away on their laptops.

This is the first Department of Coffee & Social Affairs to open outside London (they have 12 branches in and around the capital after being founded in 2010) and it is an indication of Bristol’s standing in the UK’s food and drink scene that they have opened here.

A clue to the last bit of their name can be found in the social impact book. This is a company involved in charities such as Pump Aid, providing safe clean water to some 1.5m of the poorest people in sub-Saharan Africa; and the Central London Rough Sleepers Committee which serves more than 1,000 meals a year.

The new Bristol cafe has floor to ceiling windows and is flooded in natural light, with tables held up by scaffolding poles on top of which are small tubs of succulents, and on one table a self-service filter coffee area.

Sandwiches will be served here from next week. Currently, the counter has pastries, banana bread, almond flapjacks and more for sale which all present a tempting accompaniment to the coffee.

The Department of Coffee & Social Affairs is about much more than just a cup of Joe.