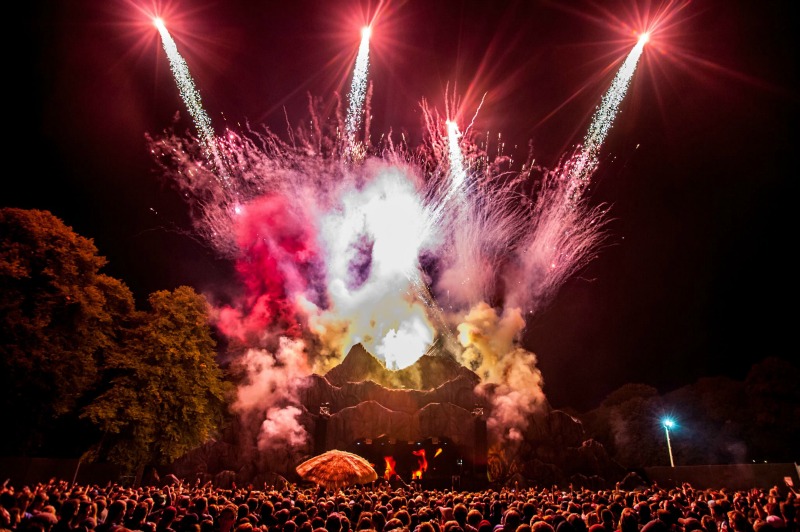 Don’t yet know which generally locked-up places are going to be open for a nose around for this, the 25th event’s outing, but previous years have included Windmill Hill City Farm, Avery’s Wine Cellars, Redcliffe Caves, Charles Wesley’s house, and the seriously extraordinary Kings Weston Roman Villa, wherein 2,000 year old mosaic floors, bath suite and underfloor heating system are to be found slap-bang in the middle of a housing estate.

You’ll find lots of free ents and music on the village green during the Saturday and Sunday, ticketed events elsewhere. The Big Sing Workshop is always a draw on Sunday afternoon, then there’s an art project, morris dancing, kids’ stuff, etc.

“Tokyo World is about being as inclusive as possible by integrating the full scope of both innovative and timeless music,” say the good folk behind this multi-stage mix of house, drum ‘n’ bass, grime, hip hop, and all-round general bassiness. No word on line up at press time, but last year saw the likes of Action Bronson, Sister Sledge, Groove Armada, Lady Leshurr, Stereo MCs, Lethal Bizzle, Little Simz, Morcheeba, Mike Skinner, and Nadia Rose.

The UK’s longest running competitive short film and animation festival – more than 200 entries are screened – is also an official gateway to the BAFTAs and a qualifying festival for the Oscars. Hence the quality.  Originally conceived as a one-off event as part of 1995’s Centenary of Cinema celebrations, Encounters just kept running and running. As well as screenings, expect Q&As, interviews and workshops with the experts, plus live music and performance, exhibitions, outdoor events, pop-up cinemas and much more. No word on the programme, naturally, as the closing date for submissions isn’t until June 6.

Big as it gets when it comes to celebrating all things kidlit – in Europe at least – as the fest returns for a 29th outing. We don’t yet know which word arrangers will be along for the readings, signings, etc, but expect a similar quality to 2018, namely: David Walliams, Philip Pullman, Lucy Worsley, Lauren Child, Tom Fletcher, Cressida Cowell, Harry Hill, Terry Deary, Nadiya Hussain, etc.

End of the Road

Big bunch of tributes including Coldplace, the Fillers, Kings of Lyon, etc.

Trivia corner: while its clarity of light made it popular with landscapists dating back to Turner, it was the decline of the pilchard industry in the 1880s that really helped establish St Ives as an artists’ hub. Fishermen’s vacant workshops and net lofts were converted into studios as artists, reaching the coast on the railway that had arrived the previous decade, convened from across the globe. Thus, a gem we learned from one of the guided history walks at last year’s fest. Besides the smartly programmed festival of art, you’ll also find street theatre, films, and a folk-centric music bill, this year featuring the likes of Show of Hands, Dougie MacLean, and Sam Kelly and The Lost Boys.

No word on what they’ll be yet, but expect roughly 100 feature films and over 150 shorts at this, the biggest indie film fest in the land.

An awful lot of fun, this. Like darts at Lakeside, but for music. Assuming you do it right: eschew paying to see the world’s very finest Elvis tributeers in stiffly formal theatres and, instead, watch the next tier play out to an altogether more welcoming singalong pub atmosphere for free. The ratio of Sun years: Vegas years Elvis is, naturally, about 10:1, but you never know your luck. One year, your guide writer was staying in the Elvis-packed adjacent caravan park at festival time, pitched up next to quite a creditable GI Elvis.

Glorious almost-local landscape hosts 16 diverse walks for all abilities and all interests, incorporating everything from steam trains and forests, caves and hills to alleyways and cream teas.

Great story, this: in the mid-1990s, it was suggested that a ‘book town’ on the model of Hay-on-Wye would be a good way to help regenerate a Scottish community. Six small towns submitted bids, and an international panel chose this place. In 1999, the new Scottish Parliament acknowledged Wigtown as Scotland’s National Book Town, and it hosted its inaugural fest. 20 years on,

there are more than a dozen bookshops and related businesses here. No word on the 2019 programme yet, but last drew the likes of Louis de Bernières, Ann Cleeves and John Gray.

One last time around for Outlook at the 150-year-old abandoned fort, where 10 stages and tons of boat parties play host to the likes of Goldie, Bugzy Malone, Chase & Status, Loyle Carner, and Shy FX.

Fifth outing in Berlin for the American franchise, this year including Kings of Leon, Twenty One Pilots, Underworld, Princess Nokia, and Swedish House Mafia.