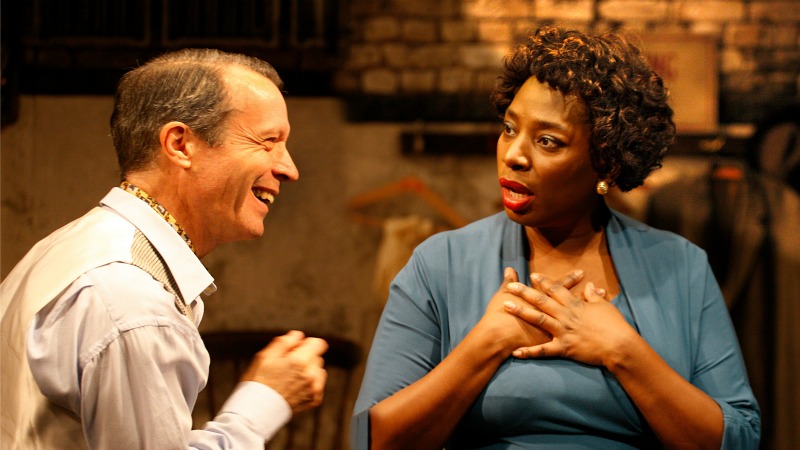 This is a very special piece of theatre. It’s warm, entertaining, heart-swelling, cringe-making, shame-facing and packs a hell of a punch, staring 2016 in the face all the way from 1955. In short, you need to see it, because if you miss it, you’ll hear repeatedly how you missed out.

What do you see when a famous white writer’s script about a Deep South lynching puts stereotyped dialogue and a “white saviour” plot in the mouths of a black cast? What happens when the cast – who need work and money, have ambition and dreams – know it’s unreal yet say nothing, or even defend it? What happens when you dare speak out? When a lynching isn’t just a story in a play – but when it happened, right there, in front of you?

Alice Childress’s play is set in 1950s New York. A new script goes into rehearsals. It was pulled “from the bottom of a pile” by the writer – now doing “commercial” work – when he heard that director Al Manners was looking for something about “the race situation” for his first Broadway show.

We see the rehearsal process and the advice the black cast give to one another. We hear their hushed ridicule of the script, plot, dialogue – the roles given to black women (all named after jewels or flowers; dressed in smocks or bandanas; saying “yessir” and praying). We see how differently some behave when their white colleagues (director, stage manager, fellow cast members) are there; the tensions and warnings about getting “too close”.

Everyone is self-censoring, and the price is dignity. In fact, the only voice that gets heard is ultimately that of the white, male, absent playwright, who clearly has no idea what he’s writing about. He only knows about who he’s writing for – a Broadway audience as ignorant as him.

There are nine beautifully drawn characters, each as clear as a bell. Tanya Moodie’s Wiletta Mayer is a superbly complex, wholly absorbing woman, played with depth and range. It’s a delight to see Wiletta’s chop-and-change demeanour, as a black actress who needs to get on. Hers is a stand-out, award-winning performance.

Jonathan Cullen is Al Manners, the white director who’s sometimes at the top of this food chain. His “big guy” act fools no-one – but, bullying racist or not, he’s the man who hires and fires. Ultimately, for these black actors, that’s about real bread and butter.

On paper, the other parts may not loom as large: but, thanks to the strength of their performances, you’d believe in complete spin-off dramas with any combination (Pip Donaghy as delightful, ageing janitor Henry, Daniel Ezra as up-and-coming John, Kiza Deen’s wonderfully sassy Millie, Joseph Marcell’s powerful but surrendered Sheldon, Emily Barber’s well-meaning Judy, Patrick Walsh McBride as lowly theatrical careerist Eddie and Geoff Leesley as the great white star, Bill). This is another great ensemble piece from the Ustinov.

Laurence Boswell’s direction gives the piece a true sense of claustrophobic isolation. On the marvellously crowded Ustinov stage (superbly set-designed by Polly Sullivan), Wiletta has to travel from safe certainty about her role in a white world, into exposed and dangerous territory, a quiet, compliant supplicant no more.

Congratulations must go to the entire production team: this is a warm, moving, enjoyable, chilling and inspiring show. At risk of repeating myself: do not miss it.

Trouble in Mind continues at the Ustinov Studio, Bath until December 17. For more info and to book tickets, visit www.theatreroyal.org.uk/page/3029/Trouble-in-Mind/1315