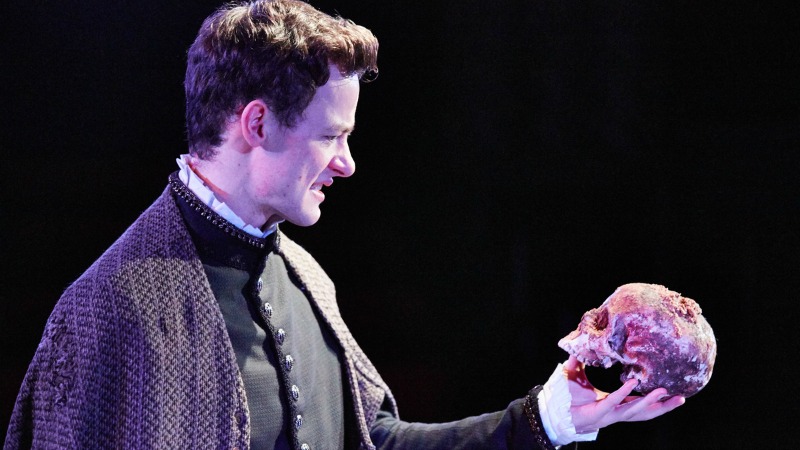 You’ll know by now of Shakespeare at the Tobacco Factory’s intimate, chamber-theatre style – black-box space, effective but spartan staging, the power residing not in opulent sets but in rigorous emotional truth and beautifully crafted performances.

Whether or not this style works for you (and those few for whom it doesn’t have missed some extremely powerful theatre over the past 15 years), tonight proves that, of all Shakespeare’s oeuvre, Hamlet is uncommonly well suited to the stripped-back stf idiom.

Hamlet is a story, after all, with a unique claustrophobia. It’s dominated by one character and his descent into unreason and isolation (you’d call it paranoia, except it’s largely justified: there is evil nearby, and he is, increasingly, a marked man).

What’s more, the action takes place almost entirely within the four walls of the Danish royal castle – a site, increasingly, of whisperings, paranoia, enforced jollity and general unease. And so stf’s sparse, minimal staging is perfect for this intense, endlessly watchful mini-society, turning ever more in on itself with its murmurings, surveillance and hushed tête-à-têtes.

Some pared-back stagecraft won’t, of itself, ensure a great Hamlet. But happily, everything else is in place too. You could argue that a production of this play lives or dies by its leading man, and in Alan Mahon director Andrew Hilton has found a preternatural Hamlet. Mahon gives an amazingly visceral sense of Hamlet’s febrile youth, his passion, his alternating moments of young manly swagger, intellectual arrogance, grief and gloom.

There’s a real snarling menace to his ‘Get thee to a nunnery’ tirade at Ophelia, and he manages to make old warhorses such as ‘I have of late, I know not why…’ sound freshly minted. This is a young man undergoing a frightening mental disintegration in the same room as you, not some groansomely well-known lines from a 400-year-old play. There’s a strong sense that, if the discovery of his father’s murder has set Hamlet off on this dark inward journey, the constant surveillance of him has accelerated that trajectory.

Mahon gets support that ranges from very able to outstanding. You might take time to come around to Paul Currier’s urbane, softly-spoken Claudius (my own mental image of this brother-poisoning throne usurper has always been more obviously dark and dastardly), but his quiet scheming does soon, and handsomely, convince. Yes, it is just such a smooth, oleaginous politician as this who might rise to power, in a Medieval Danish court or at many other times and places in human history.

Julia Hills’ Gertrude is twitchy and nervous just beneath the patina of regal serenity, as if expecting to be found out at any moment: her shrieks of shame and fear as Hamlet recounts her treachery to his father are chilling to hear, and the reappearance of the Ghost of Hamlet’s father, visible to Hamlet but not to her, is mesmerising – a nuclear family tableau gone badly awry.

Isabella Marshall’s Ophelia also captivates – initially soft and demure, then thrown off course by Hamlet’s yo-yo treatment of her. Her own madness – lipstick awry, alternately shouting, singing, bawdy and suddenly, inexplicably gleeful – is another of the evening’s most chilling moments. Her father – Ian Barritt’s Polonius: verbose, pompous, punctilious, never likely to use a word where ten will do – also brings much of the play’s light relief. Joel Macey and Craig Fuller are also thoroughly convincing as Rosencrantz and Guildenstern – amiable, polished young men, quite out of their depth in the murky water between Claudius’ machinations and Hamlet’s angry resistance.

More cathartic comedy comes from Nicky Goldie as an arch, bawdy sexton, tossing skulls nonchalantly up from her excavations and trading linguistic puzzles with Hamlet, whose tender yet sardonic remembering of Yorick is another newly-minted warhorse (how many lines from this play do you find yourself recalling? Very many. Yet how many sound stale tonight? None).

As Hamlet’s knowledge of his uncle’s vile deed hardens, there’s a growing sense of bewilderment and fear around him. And as a dark, concentrated tale of one young man’s spiralling sense of mental and moral isolation, it’s difficult to imagine this being done better.

Hamlet continues at the Factory Theatre until Sat, March 26, returning from Mon, Apr 25 to Sat, Apr 30. For more info and to book tickets, visit www.tobaccofactorytheatres.com/shows/hamlet