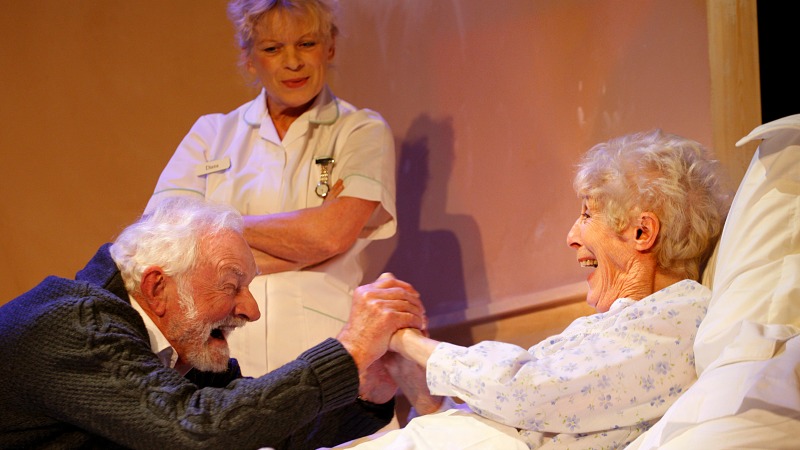 Pictured above: Patrick Godfrey as Patrick and Helen Ryan as Clara. All pics: Simon Annand

This lovely play is a fascinating watch. A Ustinov audience is always privileged to be so close to the stage. In Half Life, you’re as good as “in the room”: a part of an achingly human, warm and poignant story, stuffed with kindly wit.

There are no scene-stealers or even clear leads in this show: it’s ensemble theatre at its delicious best. Actors at the top of their game, on the same stage – for this alone, Half Life is a must-see. Added to that is the special ingredient of Nancy Meckler directing John Mighton’s script to depict a bittersweet drama that doesn’t judge, but shows a tender and forgiving love of humans, and their mistakes. 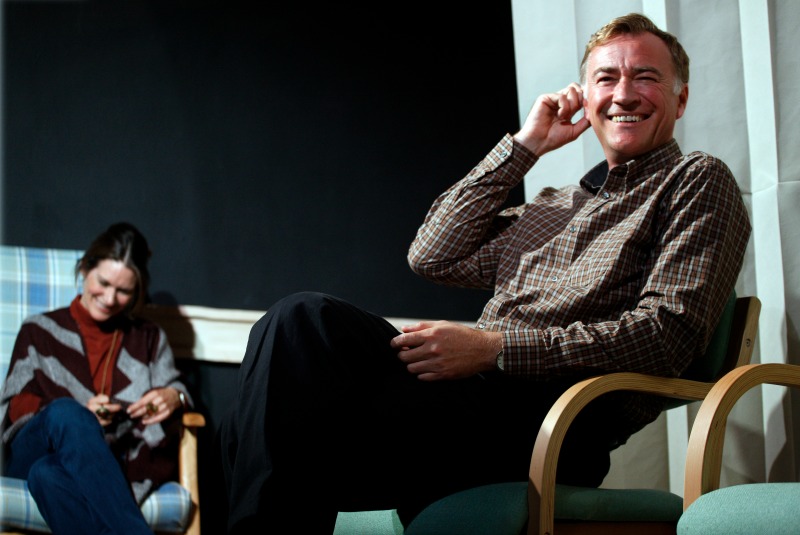 Patricia Potter as Anna and Raymond Coulthard as Donald

It’s 1999. Artist Anna (Patricia Potter) and scientist Donald (Raymond Coulthard) have each reluctantly placed their parents – Clara (Helen Ryan) and Patrick (Patrick Godfrey) – into care. They tell their parents’ war stories, of idealised heroism and reputation-blackening philandering, lies and drink. But then those parents meet, remember their wartime romance and reunite, setting up new challenges for their children and the authorities that go far beyond incontinence and forgetfulness. Utterly rounded and wholly absorbing, these four performances are a joy to watch.

Coupled with a script that delights in its double edges, Meckler’s taut production gifts the audience layer upon layer of bittersweet insight and reflection. This is theatre-making with great skill. Never once does the production resort to cheap over-sentimentality. The love doesn’t cloy; the sadness is never schmaltz. Rather, the team present believable, durable humanity – which is what the play is all about.

It’s the remaining characters who bring the play’s big questions about humanity, love and ‘human function’ into the light. They carry the play’s ambiguities; they’re the slippery ice where the others must tread. 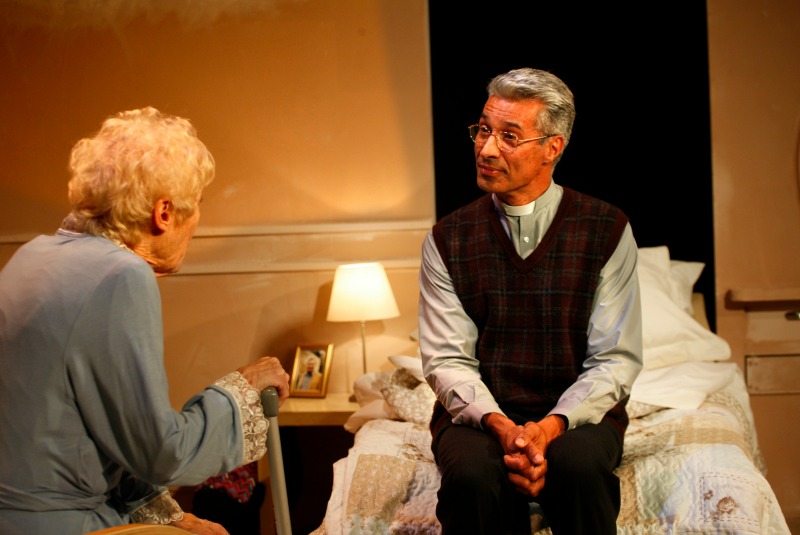 Helen Ryan as Clara and Silas Carson as Reverend Hill

Silas Carson is wonderful as the emotional, too-breezy, much-pained Reverend Hill. Possibly the play’s most complex character, Rev. Hill is full of love and is desperate to be loved. But his calling distances him from others – both because they dislike religion and because he falls into the trap of wearing a thoughtless and patronising authority.

Ishia Bennison’s care assistant, Tammy, personifies our ambivalence about care homes. Working-class and full of opinion, is she loving or pilfering? How do we feel when she plays Pandarus and brings Patrick to Clara’s bed? Lastly, there’s angry resident Agnes, played by Holly de Jong; a pained, bitter, feisty woman who had a terrible childhood, and reminds us all that when you end up in care, you could be anyone.

Challenging us to re-examine the value we place on life’s different stages – why do we treasure carefree ‘mindful’ happiness in infants, but abhor it in the elderly? – this 90-minute show runs for almost another month. Catch it before you regret it – and do it early, so you can go again.

Half Life continues at the Ustinov Studio, Bath until November 5. For more info and to book tickets, visit www.theatreroyal.org.uk/page/3029/Half-Life/1314