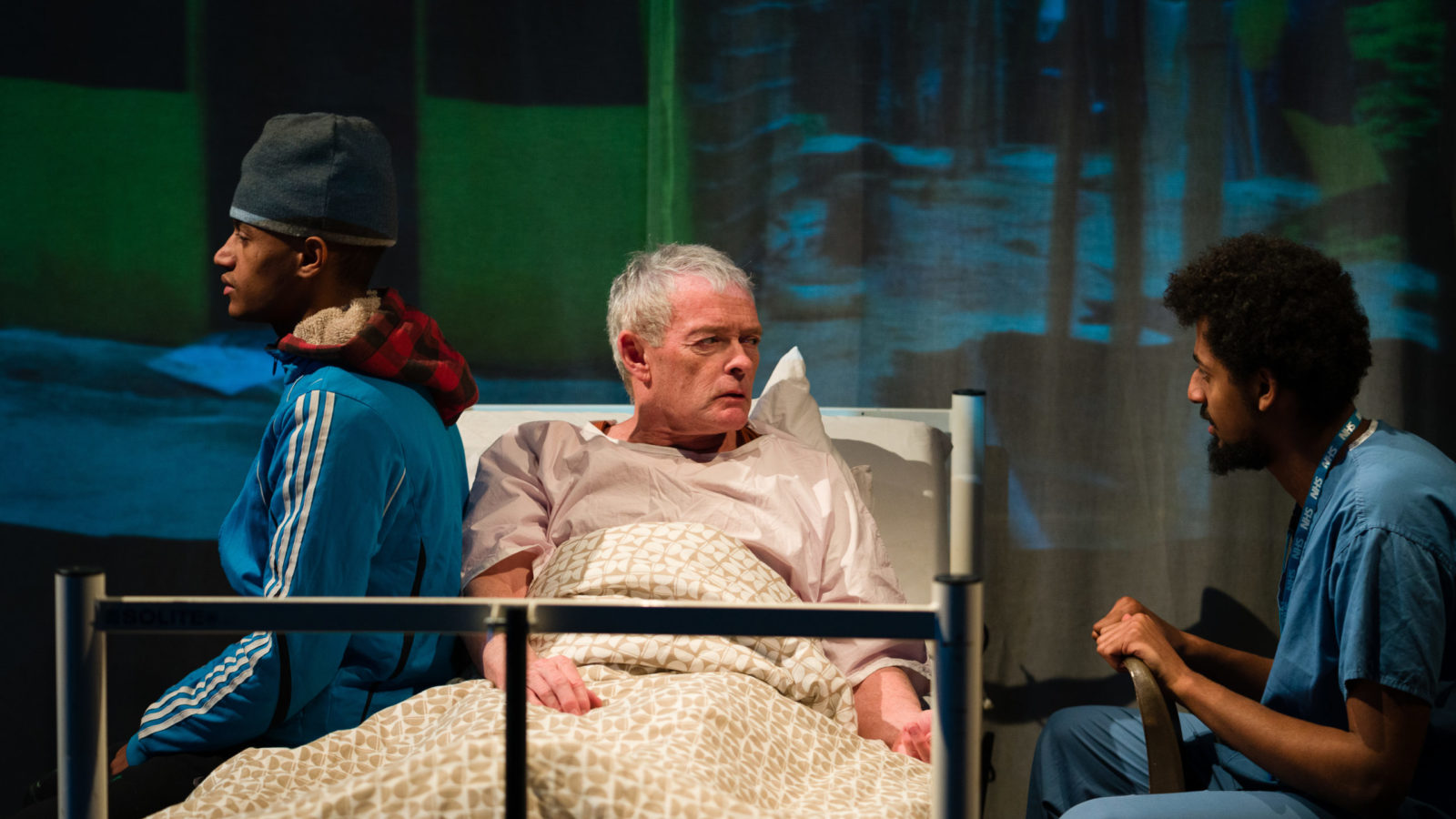 Bed 6, Oncology ward, a local NHS hospital. Behind the blue curtain: Daniel, a refugee from Eritrea, now training to be a nurse; Rahmiya, a second-generation immigrant Muslim doctor; and David, an elderly white cancer patient and discredited academic, fretting about his cat, Roger.

Over time, carers and cared-for become an unlikely, dysfunctional family. But as life ebbs, reality splinters. Glimpsed in the cracks: the Nazi euthanasia programme, a burns clinic in Africa, a cross-Channel human shipment. And, drip by drip, David’s far-right nativism seeps out, as he prepares his final, incendiary lecture (assuming he lives long enough to give it). Bonds break, and suddenly both Daniel and Rahmiya’s right to call the UK home seems to hang on a dead man’s lips.

in Drip Drip Drip (Wardrobe Theatre, Feb 19 & 20) Pipeline Theatre, known for indelible characters and immersive design, takes you into the darkness with an unexpectedly light touch, busting taboos while offering its love-letter to the NHS.

Tell us a little about the research process for the play and what, I imagine, was many conversations with people both within and outside the NHS?
We firstly spoke to a group of NHS workers from our local area, just to kick the project off – a mix of nurses, hospital doctors, mid-wives, health visitors, specialist nurses, GPs (working and retired).

We barely had to ask a question: once they’d started unpacking, there was no stopping them. In fact, after three hours, we literally did have to stop them! There was a lot of sadness, anger, and in truth a sense of hopelessness (this was in late 2018).

Obviously the major topics were: under-funding, overwork, lack of resources, beds, staff shortages, reliance on bank staff, demoralisation, the cost implications of an increasingly ageing population, the endless fear of litigation, the sheer weight of bureaucracy and paperwork, systems that didn’t work, or actively endangered patients’ lives, the total lack of work-life balance, and for GPs, the inability to spend enough time with each patient.

We knew we weren’t writing a play exclusively about these issues – we don’t do pure agit-prop. However, it made for a really visceral backdrop: the working world of the NHS is stretched to breaking point, and the workload is often unsustainable. Add into this instances of identity harm, racism etcetera, and a notional lack of time/capacity to deal with it, and you have a truly toxic situation.

For the racial angle, we spoke to many other people, among them Dr Nadeem Moghal, a former consultant paediatric nephrologist, now a senior fellow at the Nuffield Trust, and Dr Gloria Likupe, who works at Hull hospital. Through them we were able to understand how, sometimes, the working environment in a hospital can be structurally racist, particularly when racism (from patient to carer, for example) isn’t called out, and when the care-worker is left unsupported. 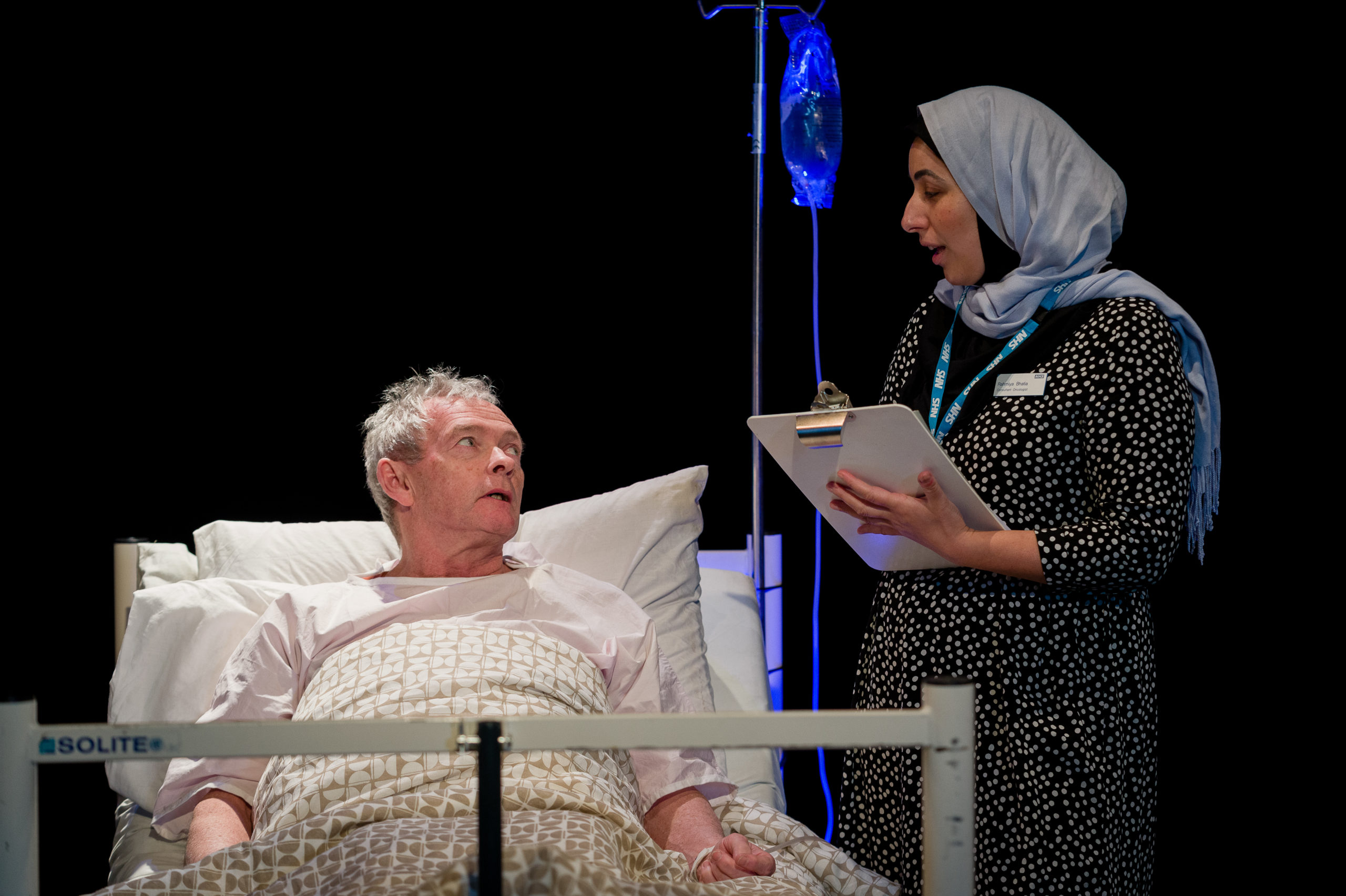 Nadeem likened the NHS, in its top-down structure, to a working model of British colonialism; he spoke of a former colleague who wouldn’t promote people simply on the basis of how initially ‘unpronounceable’ their names might seem. All this left us with a fine line to tread: we didn’t want the play to be a take-down of the NHS, but at the same time it’s clear that it’s under strain, patients are of course often in extremis, and as a workplace it’s also a cultural melting pot.

Beyond this, we held a funded R&D period with minority-ethnic actors, dramaturg, and healthcare workers in the room, which (for a theatre company made up of white people) was essential, and in some ways life-changing. We all have the capacity to be racist, to internalise biases that we’ve been fed through childhood and beyond: our first thoughts may not cover us in glory, but our second (and kinder/wiser) thoughts are the ones we can choose to define ourselves by. 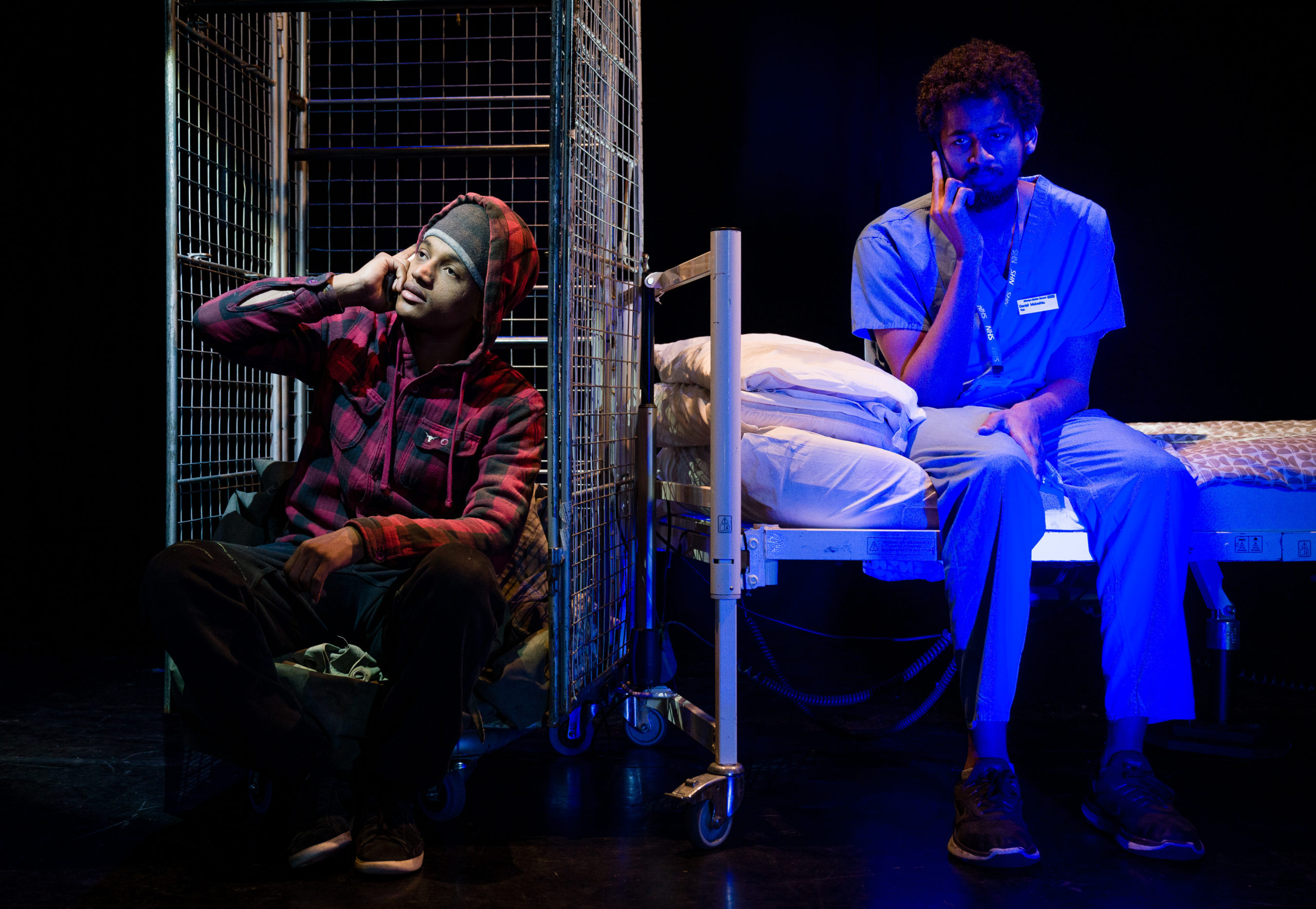 The story features some polarised characters and I guess readers may imagine they can guess the way things will pan out (basically, either with or without a radical rethinking from David?). Does the storyline contain some surprises?
Well, whether or not David (the amateur ‘race-scientist’/Islamophobe/anti-immigrant/far-right nativist) has a redemptive change of heart has always been a nuanced question.

In the play’s pilot tour, the actor playing the Eritrean refugee and trainee nurse said he wouldn’t have taken the job had that been part of the storyline (it’s since been substantially re-developed). And I understood completely – it would have been too ‘pat’, and it would have made the white character in some respects the ‘hero’, helped, as ever, by attendant/secondary BAME characters, whose roles would have been subjugated to that redemptive narrative.

I suppose my interest in people who espouse radical dogma, or people who use far-right ideology to ‘win’ arguments and largely define themselves, is how all that must surely come at the expense of their capacity for empathy. I’ve described him as having a barricaded mind. So the question for me is not whether he changes his ideology, but whether the hidden, human mess that lies unexamined beneath it is in any way revealed, or exposed on his journey through illness, and what that might do to him on a personal level. 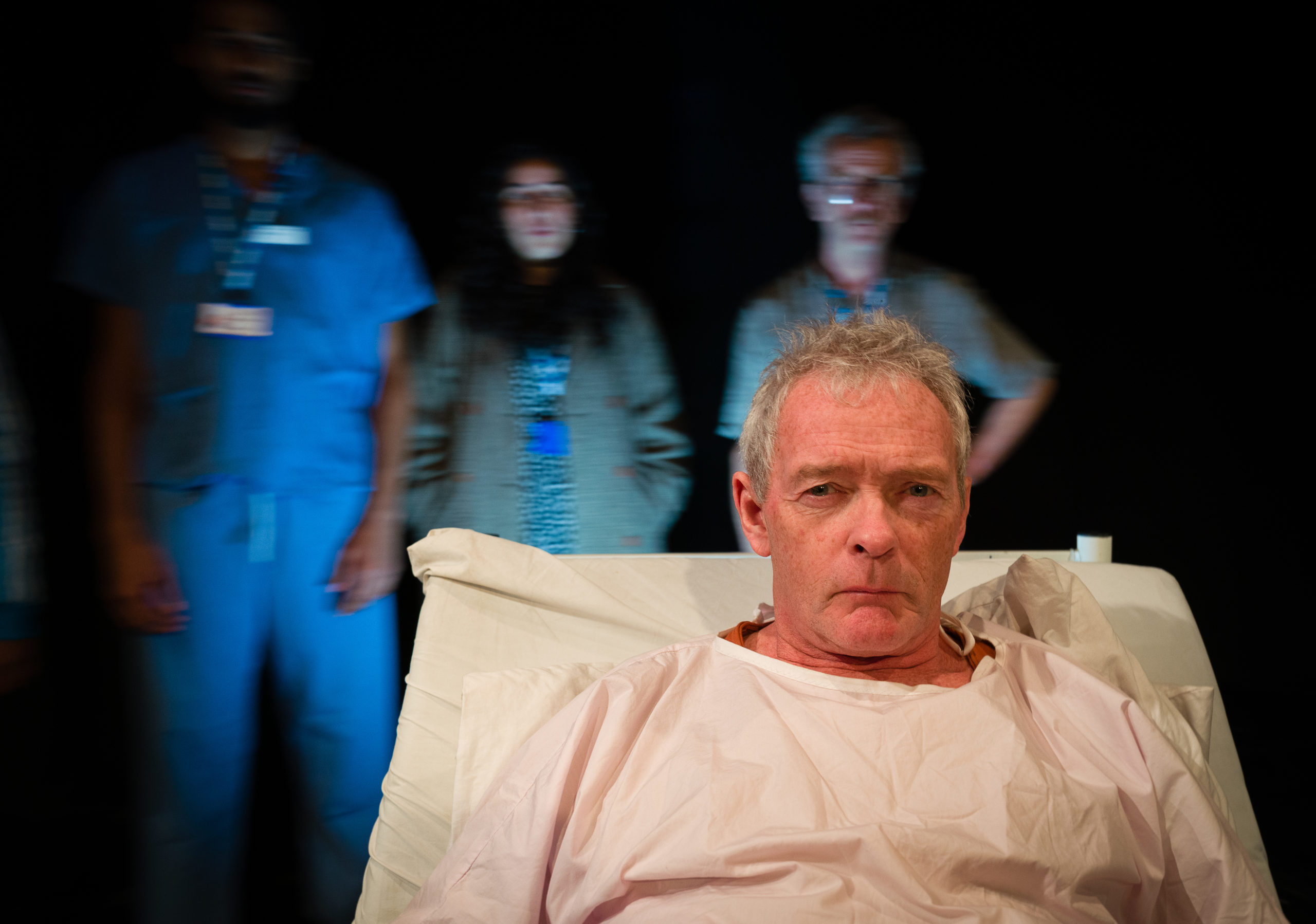 I don’t want to give spoilers, but it’s important to note that this new version also, I hope, treats all the characters democratically, in terms of narrative function, depth and emotional weight. The other characters have their own foibles and predispositions, and might also be in line for their own epiphanies. The surprises might not come from where you expect them.

How bad do you think is people’s ignorance of the state we are in – i.e. of how much institutions like the NHS will suffer if we harden our borders?
Pretty bad. The Brexit effect is already happening. Just recently there were reports in the papers of A&E waiting times becoming increasingly long. It’s so clear that in many spheres of life, particularly in healthcare, we depend on immigration. And in fairness, the ignorance is largely due to an unaccountably partisan print media, that seeks out and embellishes the ‘negative’ migrant stories, and pays virtually no attention to the positive.

Does David go on something of a journey in the play (in terms of his view of immigration, etcetera) – and does the play by implication suggest that many others of us need to go on some of that journey too?
His journey takes him from detached, isolated (if febrile) commentator, to direct human contact at his point of most neediness. It’s interesting that where I live, in Cornwall, there was a strong Brexit vote, based largely on the fear of unrestricted immigration – this in a place with virtually no immigration of any statistical significance.

So yes, I think we could all benefit from stepping out of our bubbles and making contact with different people and cultures, so that we can understand that, for the vast majority, most of the time we’re all the same. 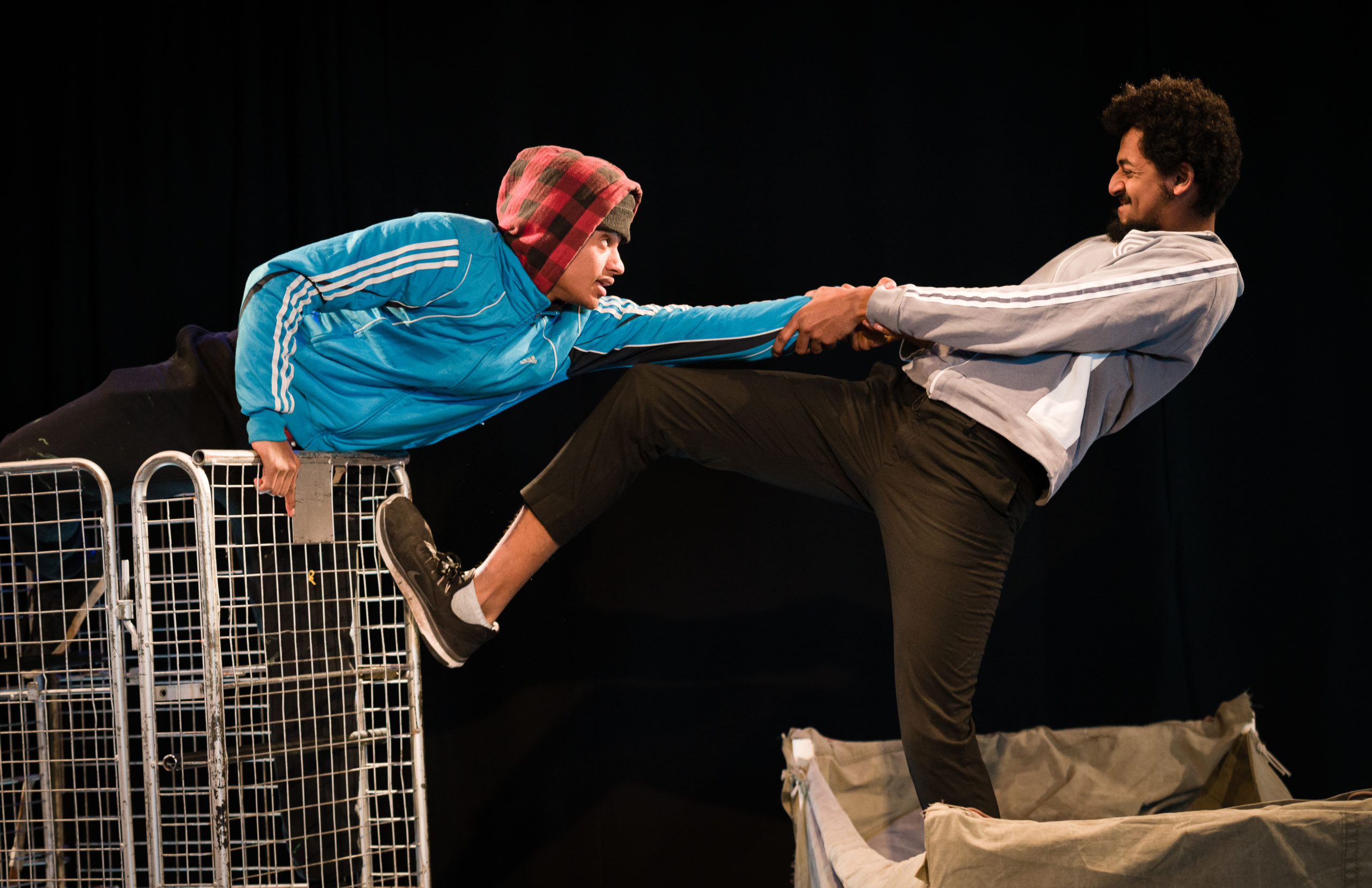 The cat Roger – comic relief, or symbolic of anything else?
Both. It’s very important that he’s named after Roger Scruton, the right(ish)-wing philosopher (he believes strongly in the importance of national borders, and is very into fox-hunting). He’s also the focus of David’s fear and misplaced/displaced human need for love.

But at the end of the play he (Roger) also needs a home, someone to be looked after by, somewhere to belong. And it’s important that the people trying to sort this, are the people who most need those things too. So in that sense, yes, he’s a symbol of that kind of vulnerability.

Tell us a little about Pipeline – your preoccupations and ways of making theatre.
We formed about six years ago, wanting to make black-box studio plays that take on the big, resonant social issues of the day, but in a way that is character-driven, funny, often ‘low-key’, and – most importantly – relatable. From an audience point of view our plays are seductions rather than assaults, although people will often tell us after our shows that we have emotionally eviscerated them!

Since we formed we’ve made plays about fostering, the Kindertransport, mental health, drone warfare, the online sex industry and the use of AI in aged/dementia care. We also run a community theatre strand, working with large local casts of first-timers, many with significant mental/physical health issues. 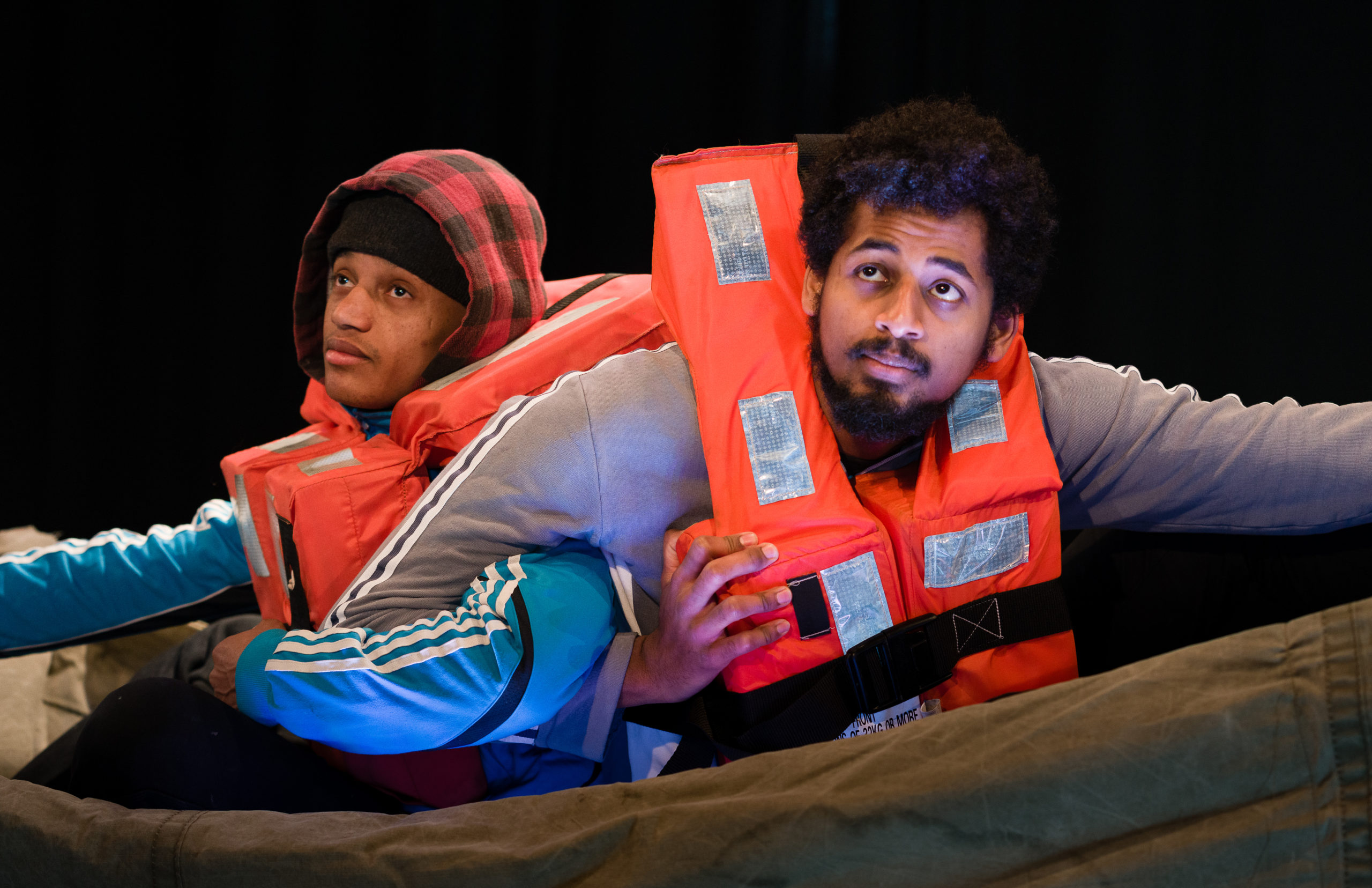 Immigration – public perception of it, and the vital role it plays in key institutions such as the NHS – is a major strand running through ‘Drip Drip Drip’

In our touring work, to balance our hard-won emphasis on naturalism, our design strives to immerse and dazzle – Jon writes the plays, but Jude and Al (both makers, designers, set/prop/costume/puppet-makers) are organically integral in the overall conception of each play and its subsequent creative journey. Design and text develop together. This combination makes small rural or studio venues often feel like they’re getting a ‘bigger’ play than would seem possible in their theatres.

The company is known for its ‘immersive design’ – can you tell us more about that?
As said, we always punch above our weight when it comes to small-scale touring. We’re big on projection, and mixed-media, and with Drip Drip Drip we take the show ‘into’ the audience, to give the sense of movement and space within a hospital environment.

Outside of that, the main ‘immersiveness’ comes in the sound design. It’s been described by reviewers as an extra character. We take a great deal of trouble over it (speakers everywhere, hundreds and hundreds of sound cues – a nightmare for whoever’s running the show!), not least because sound and score bypasses all the other senses, is unfiltered by speech and imagery, and goes into the deepest of our responses, with the most immediacy, and sometimes in ways that the audience might not even be consciously aware of.

Drip Drip Drip is at the Wardrobe Theatre on Feb 19 & 20. For more info, visit http://thewardrobetheatre.com/livetheatre/drip-drip-drip/