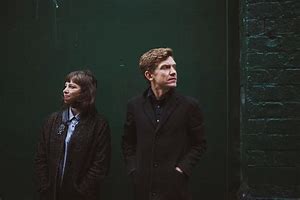 Well, that was fun. A darkened room at the back of a pub, a somewhat sparse audience and the stickiest floor in Bristol (squelching noises from rising soles providing occasional percussive support to quieter musical moments). Oh, and two quirky and inventive combos to keep us entertained whilst we are here. Fun indeed, and all on a school night.

Opening up is Sweet Billy Pilgrim. Now just two of them when not long ago they were six. The list of Field Music influences (I refer you to my previous answer) could also be applied to Sweet Billy but their new material seems to throw in a heavier taste of classic Americana to their current musical soup. Channelling their inner Gram and Emmylou with some lovely harmonies. Their new songs are, on first listen, distinctive and memorable. Their writing process starting out as angry and ending up miserable apparently. Think we all know how that feels in these troubled days. They throw in a playful Sledgehammer and a vocal take on Robert Fripp’s guitar sound—knowing giggles all round.

Top of the bill are You Tell Me, hot on the heels of their self-titled debut album. Unassuming doesn’t begin to describe their genial presentation. They have the air of the winner of a local community music prize who have just found out, to their great surprise, that they are really rather good at this sophisticated pop malarkey.

Their two prime movers—David Brewis (various angular guitar sounds and vocals) and Sarah Hayes (keyboards and most lead vocals)—have written this new batch of songs. You may know them from Sunderland’s finest, Field Music, providers of a string of inventive pop/prog albums over the past decade or so. Reviews of their parent band always mention the same list of maybe influences from the sort of bands that white-boy record shop dwellers loved in the 80s/early 90s—Blue Nile, later XTC, Talk Talk, Prefab Sprout, maybe the first few Peter Gabriel albums. All of these are evident in the You Tell Me material, but Hayes has bought a huge dab of folksiness (she is also a member of Glasgow folkies Admiral Fallow) along to the party that adds a distinct flavour of Fairport to proceedings.

They open with Clarion Call. This is the one you might have heard on BBC 6 Music and has the most enticing hook on the album. The writing is concise, melodic but not afraid to have short musical diversions that show off their not inconsiderable chops. The songs feel slightly, but likeably, underwritten. There are real gems here that could have been polished further but they are no worse for that and the charm of their performance overrides any such concerns.

They include a cover of Kate Bush’s And Dream of Sleep (Brewis and Hayes met at a celebration event for their reclusive hero). Bravely they follow this with Jouska, a song written with a clear nod to Kate, and it survives happily in comparison to Bush’s writing. Lyrics are about frustrated office romances, Watercooler, and going on holiday, Foreign Parts. No stimulant fuelled tales of rock n roll excess with this lot. Springburn and Jabuki are more reflective, the latter effectively showcasing Hayes’ lightly accented vocals, whilst Get Out of the Room grooves with a more urgent, knotty white funk. I thought they were great and they were clearly enjoying themselves too. They ended with an Ivor Cutler number set to a Bo Diddley beat. What’s not to like?