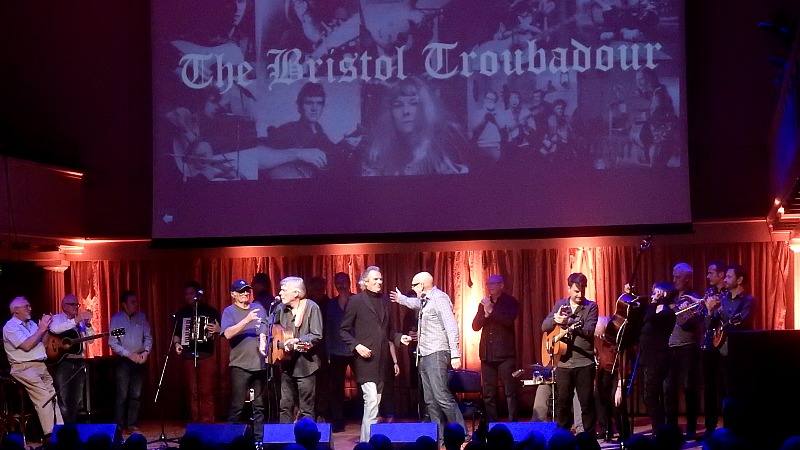 Ian A Anderson is very taken with the idea that the 60s folk club scene was like punk, and in some ways he’s right. Kids doing it for themselves, on the margins of popular culture, a classless underground united by the love of music and pissing off their parents. Fuelled by coffee rather than alcohol (or speed), and less political than punk (apart from some of the comedians), the folk clubs were a genuinely counter-cultural movement.

The Bristol Troubadour on Waterloo Street in Clifton Village, linked at the time more with Les Cousins in Soho than the London Troubadour, was a major part of a circuit that saw legendary game-changers like John Renbourn, Al Stewart, Ralph McTell, the Incredible String Band, Sandy Denny and Michael Chapman play two sets upstairs and downstairs in a venue the size of their later dressing rooms. Fifty years on, this ramshackle but significant movement celebrated its anniversary at St George’s. And, lo and behold, it was magnificently significant and comfortingly ramshackle.

Professionally staged and with a sound that Michael Chapman remarked would have made them all stars in the 60s, a splendid lineup contained artists of genuinely legendary status (Wizz Jones, Chapman) with younger artists paying tribute to performers sadly no longer available, and some of the local artists that would have given the club its particular ambience. Ian Hunt and The Pigsty Hill Light Orchestra especially lent an impromptu air to the proceedings (Hunt had to borrow a guitar from Anderson, having travelled from Spain for the gig without one), which balanced what might otherwise have been a rather reverent occasion.

Jim Causley performed a well judged set of Adge Cutler and Fred Wedlock tunes, Three Cane Whale produced a nicely arty sprint through some Incredible String Band numbers, and Jim Moray channelled Jackson C Frank to splendid effect. But it was the survivors who gave the evening its real force. Artists like Wizz Jones, Keith Christmas and Michael Chapman have never really courted the mainstream, yet their quality has allowed them to survive into the current era – Jones and Chapman in particular finding a contemporary audience in America.

Keith Christmas’s set was the most lyrically relevant of the night, heartfelt and passionate, while Wizz Jones demonstrated the charming separateness that has kept him the consummate musician’s musician. Michael Chapman simply displayed a command and technique that has not diminished with age and was the most potent reminder of the folk club’s role as a nursery for virtuosity.

Steve Tilston, an adopted son of Bristol, was a fitting act to close the set with Keith Warmington on harmonica, bringing his easy confidence to the difficult task of following not only The Pigsty Light Orchestra’s local know-how (and Fred Wedlock’s daughter as vocalist) but a set by comedian Jasper Carrott. Ian Anderson was determined to reflect the fact that many comedians, like Billy Connolly for example, had their first breaks in the folk clubs, and Carrott fitted the role well.

There were even video contributions from the two most commercially successful artists from that era, Ralph McTell and Al Stewart, both of whom were charmingly sincere in their reminiscences of a time and a place that obviously retains a great significance for them.

You can’t actually recreate a funky cellar bar that stays open till people leave, only serves coffee and has artists that play four sets after arriving in a clapped-out Mini, but this gig did a splendid job in reminding us that those times did exist. A packed audience, many from that era, went with the old and the new, as they should. Ian Anderson started the evening, organised it and compered throughout, and has to be congratulated on an event that fulfilled its considerable promise. Maybe let’s see if the guys from the Western Star Domino Club punk scene (which was only ten years later) can match it. Somehow I doubt it.