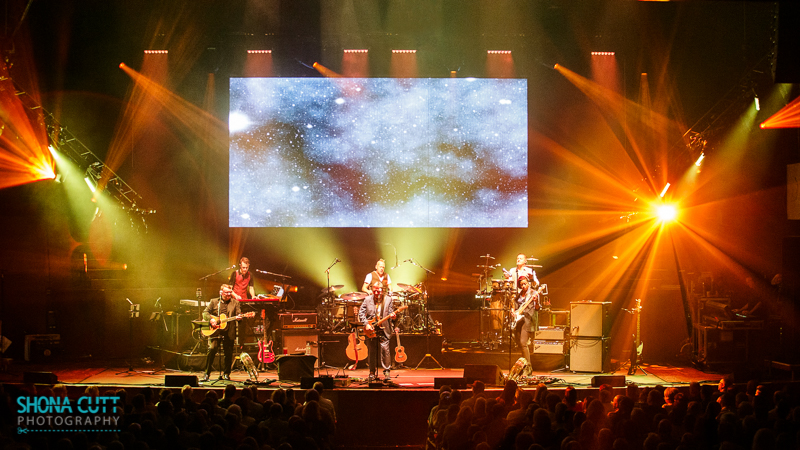 So Squeeze took to the stage at a jam-packed Colston Hall, suited and booted and armed with an enviable collection of classic hits along with tunes from new LP The Knowledge, and proceeded to play an exceptionally excellent nigh on two hour show. The dilemma of seasoned band with well-loved back catalogue attempting to integrate new material was beautifully avoided by a judiciously selected running order, extra musicians on & off to suit, new arrangements for old favourites and the simple fact that Difford & Tillbrook are still spitting out classics with ease. 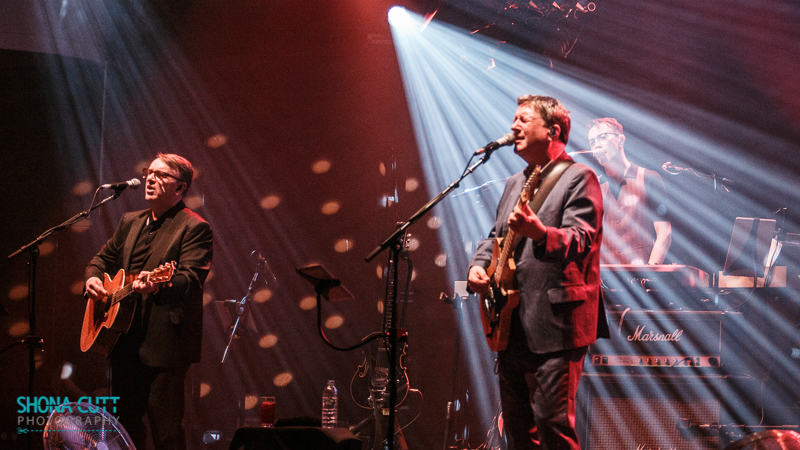 The sound was powerfully loud but clear and the light show wouldn’t have disgraced an arena, accompanied by back projections that encompassed whimsy, nostalgia, psychedelia and a virtual choir: perfectly in sync with the band for the opera diva driven disco-beast Rough Ride. The band themselves were on top form: Yolanda Charles burbling away on bass, percussionist Steve Smith giving vivacious oomph to the funky percussive drive of Simon Hanson’s drums, whilst “Lord” Stephen Large embellished but never swamped the material with his keys. Opening number Please Be Upstanding gave the band chance to join D&T for exquisite six part harmonies (and indeed, they supplied delicious accompaniment throughout) and the whole outfit was clearly having a whale of a time throughout the show. 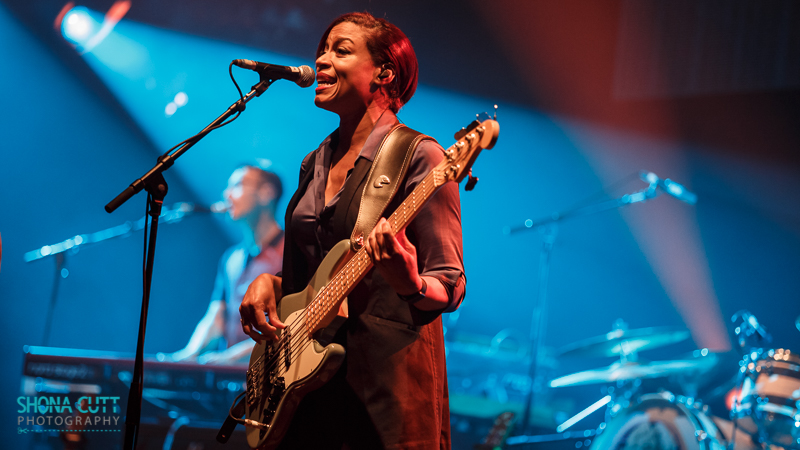 It was a genuine pleasure to hear the new cuts mixed in with the older material – Open yet another superb D&T slice of life vignette (back projections enhancing the tune rather than overwhelming, black & white wedding footage mirroring the bittersweet lyrics). Albatross received resounding cheers when Difford enquired about the availability of record shops in town, and the mid-career material slotted in well too. A drum heavy Wicked & Cruel sounded refreshed whereas the tongue-twisting Hourglass was faultlessly tight, stuffed with heavenly harmonies. Meanwhile the title track to their hiatus breaking Cradle to the Grave was pure uplifting mandolin meets Motown backbeat driven joy. 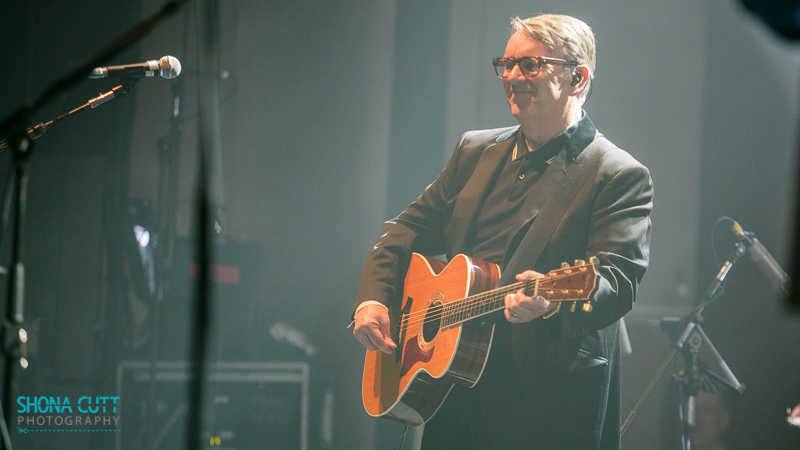 Of course those hits were welcomed like the old friends they are: Pulling Mussels (From the Shell), Annie Get Your Gun and Is That Love may not be as familiar to the casual fan, but each was received with rapture and are undeniably the equal of the perennial favourites. Tempted was introduced with a Jimi H wig-out (Tillbrook is undeniably a gifted songwriter but boy, can he play guitar); Goodbye Girl delightfully decorated with percussive bottle playing (way less rock n roll than a cowbell but sounding so British) and Take Me I’m Yours beautifully reinvented as a gypsy disco blues, Large’s accordion pleasingly reinventing the tune. 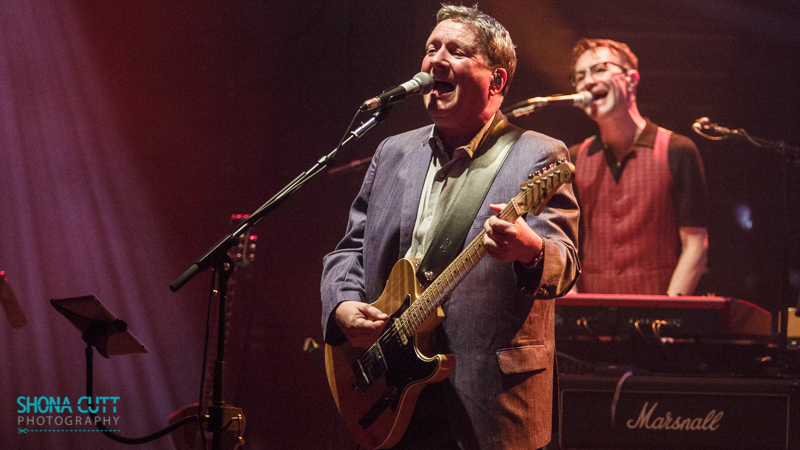 The set culminated with a faultless run of tunes, beautifully sequenced: the melancholic reflection of Up the Junction seguing in to the heart breaking Labelled with Love (Mark Feltham’s harmonica lifting an already exemplary song to a whole new level of pleasure) before a raucous bubbling Slap and Tickle brought the house to its feet again – enlivened by stinging guitar from Dennis Greaves. And speaking of the guests, the horn section (Chris and Paul) were on and off stage throughout blowing up a storm with soul riffs & rasping rock n roll fills, fattening up the sound and driving the beat. 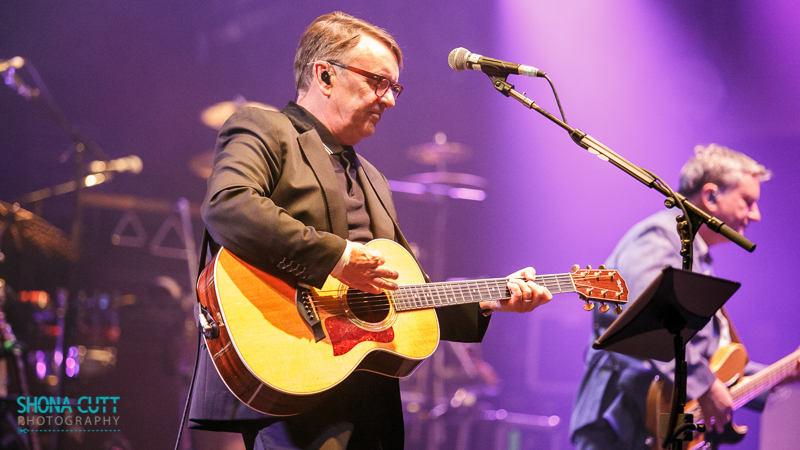 A three tune encore finished the night, Cool for Cats really grooved and not only featured a mental guitar solo but also undeniably the smallest & most passive mini stage invasion ever (one lady genteelly busting some moves before being gently helped off stage). Black Coffee in Bed closed the show as a horn driven soul drenched epic with a guitar stand-off between Tillbrook and Greaves (the audience the winner). D&T are truly gifted songwriters but they are of course fabulous players and singers too: Tilbrook’s leads enhanced by Difford’s unique backing vox and the former’s lead guitar enriched by the latter’s rhythm guitar). Based on tonight’s performance Squeeze are a hair’s breath away from being declared National Treasures by the Broadsheets and deservedly so. 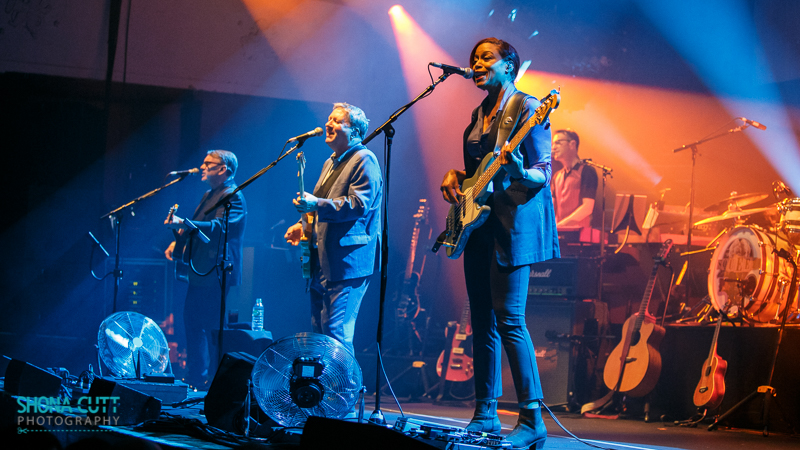