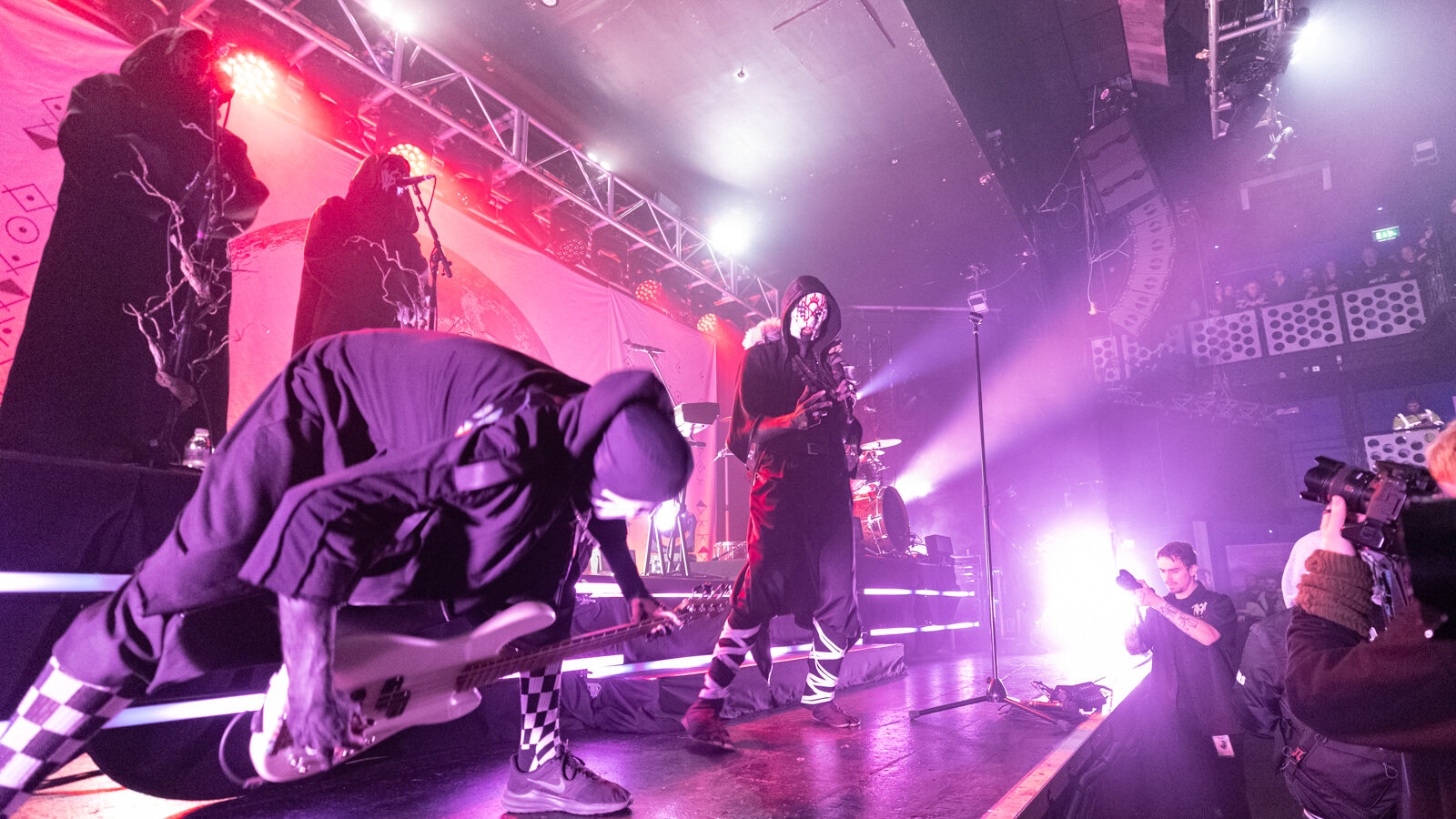 Every generation needs its anonymous, frequently masked rockers, from 1960s garage act ? and the Mysterians through the eyeball-helmeted Residents, splendid ’70s prog-popsters Klaatu (allegedly the reunited Beatles, but not really), GWAR, early Slipknot and beyond to Mortiis and Lordi. These days, there are hordes of the blighters, despite the fact that, as Ghost discovered, it’s hard to maintain anonymity when your popularity booms in the age of social media. Take your pick from Nordic Giants, Portal (fronted by a bloke who appears to have a large cardboard box on his head), The Berzerker, The Locust and Mushroomhead. Most recently, British self-styled collective Sleep Token have been making waves to such an extent that the mainstream media won’t be able to ignore them for much longer. This show sold out within days of going on sale. 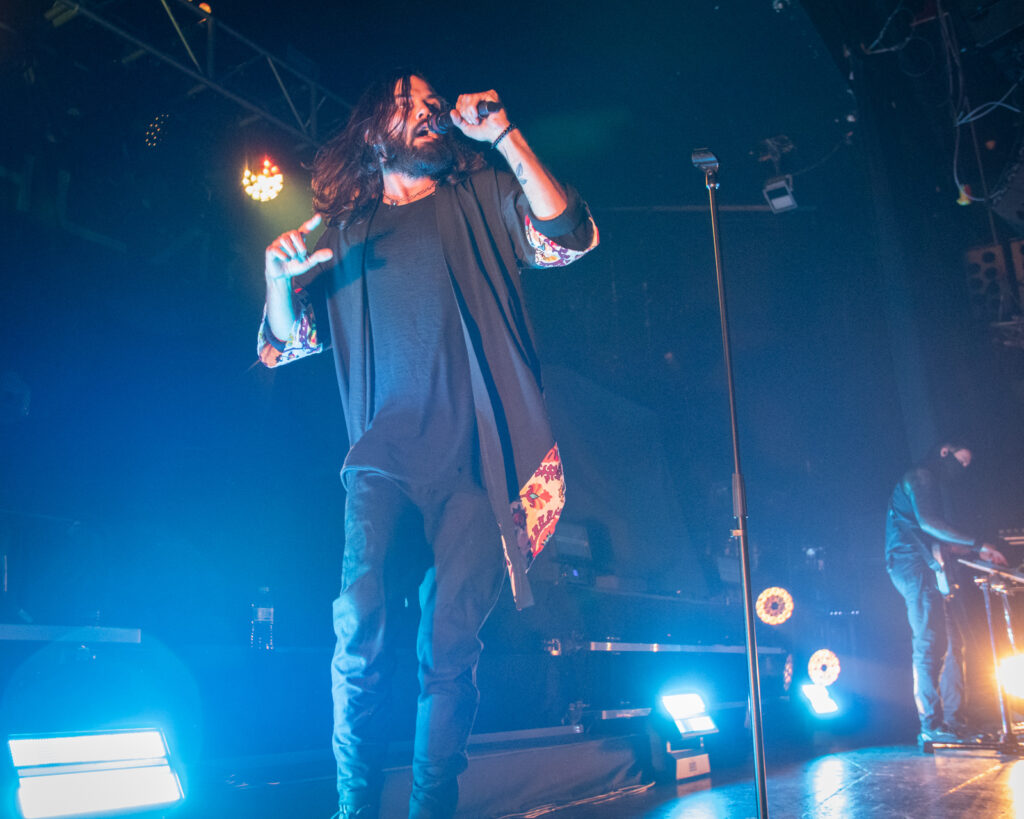 But first, here’s Australia’s Northlane. Ostensibly yet another pesky metalcore mob, they mercifully have a bit more going on under the bonnet than that description would suggest. Despite a sound mix that initially doesn’t work in their favour, especially in the guitar department, their lengthy set veers more towards tech-metal, driven by Nic Pettersen’s ferocious drumming. Livewire frontman Marcus Bridge hurls himself around the stage and the packed audience are very much onside throughout. 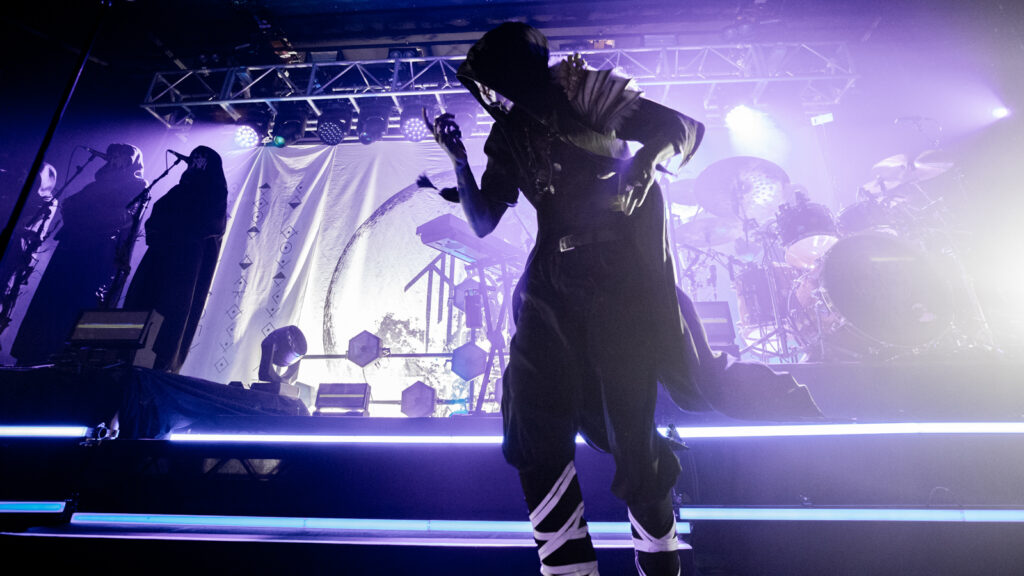 Sleep Token’s carefully cultivated air of mystery was boosted by the sudden appearance online early this year of four new songs from their upcoming third album, each accompanied by a video. They open with two of these. The masked vocalist, who goes by the name Vessel, kicks off the atmospheric Chokehold unaccompanied, before the rest of the band, including three robed backing singers, file on to a stage that appears to have been dressed with items purchased from a Behemoth or Heilung garage sale. 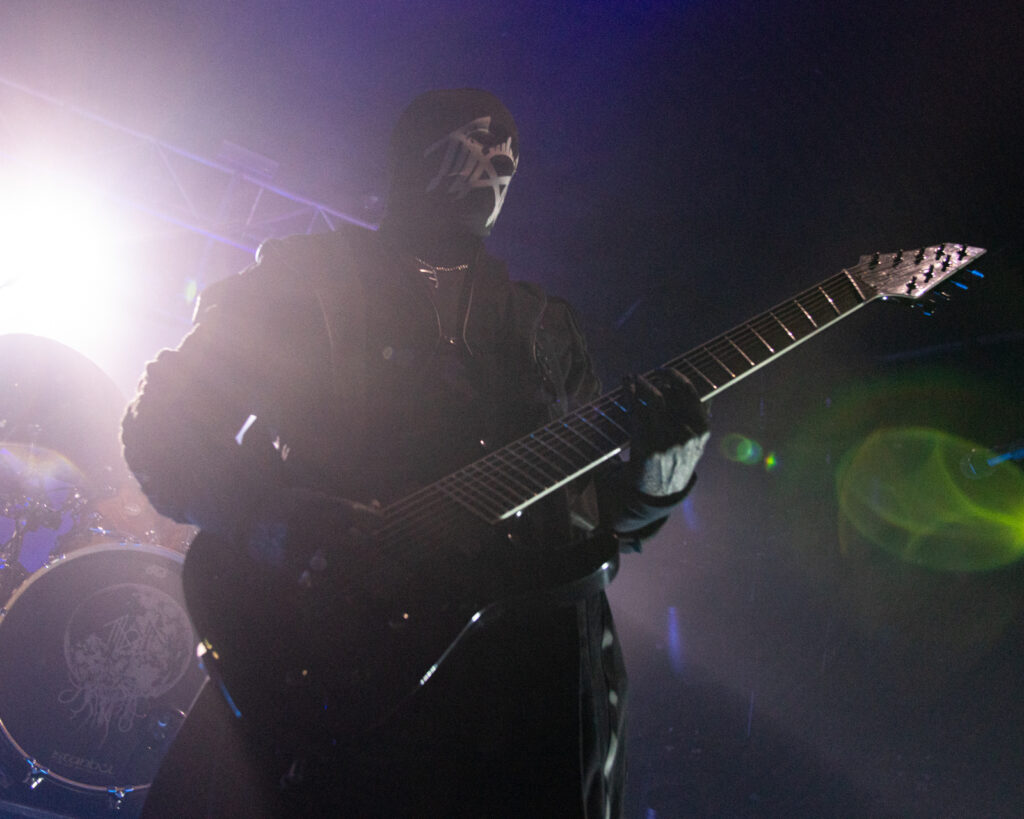 That’s followed by the crunchy prog-metal of The Summoning. According to Sleep Token shtick, performances aren’t gigs but rituals or worship events and tonight’s audience respond accordingly. Although these songs have only been out for a matter of days, everybody seems to know all the words, which are bellowed back at them. 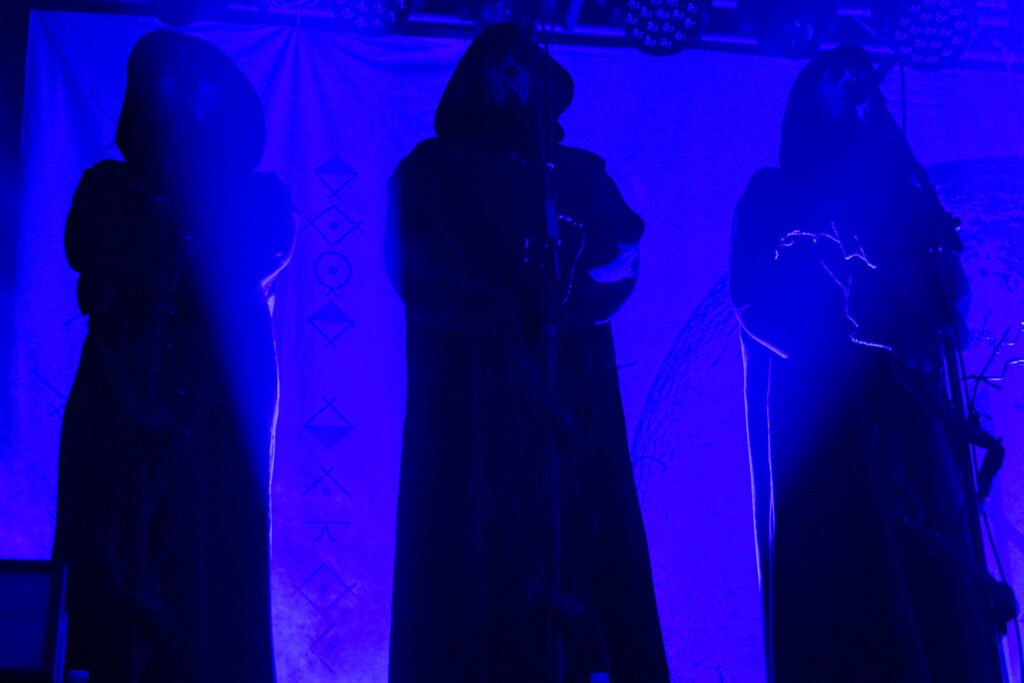 The rest of the set is drawn primarily from second album This Place Will Become Your Tomb. Regular ambient interludes permit the band (apart from the backing singers, who remain motionless for the best part of two hours) to leave the stage briefly, presumably for wardrobe adjustments and/or refreshment. 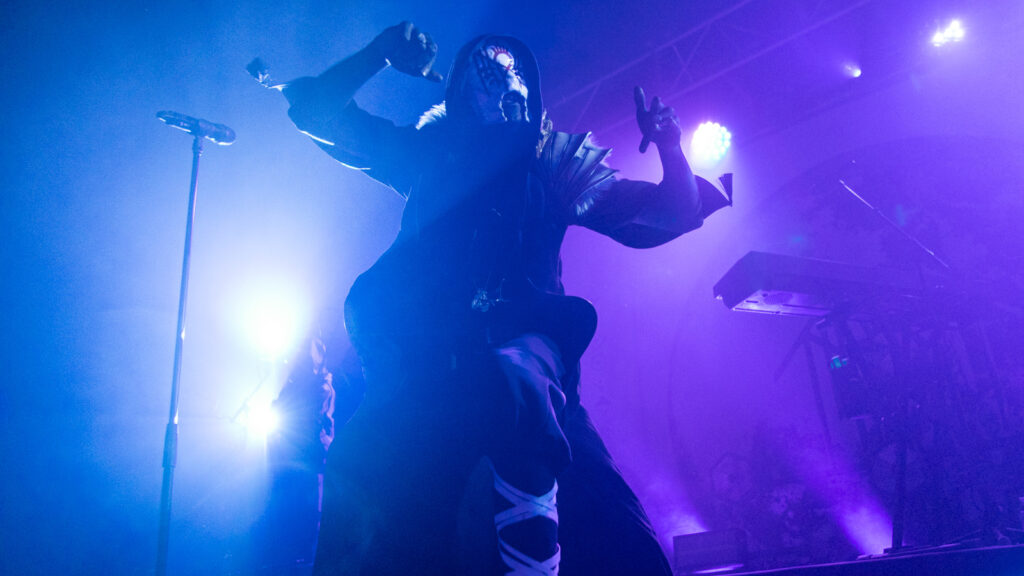 A gangly, slightly hunched figure with a penchant for waving his arms around wildly, Vessel contributes distinctive sonorous vocals and occasional keyboards, while the equally spindly bassist even busts a few idiosyncratic dance moves. Indeed, these guys are such accomplished musicians that it’s impossible to believe that they haven’t played in other bands over the years, which will be their Achilles heel when it comes to the inevitable eventual unmasking by online fun-spoilers. 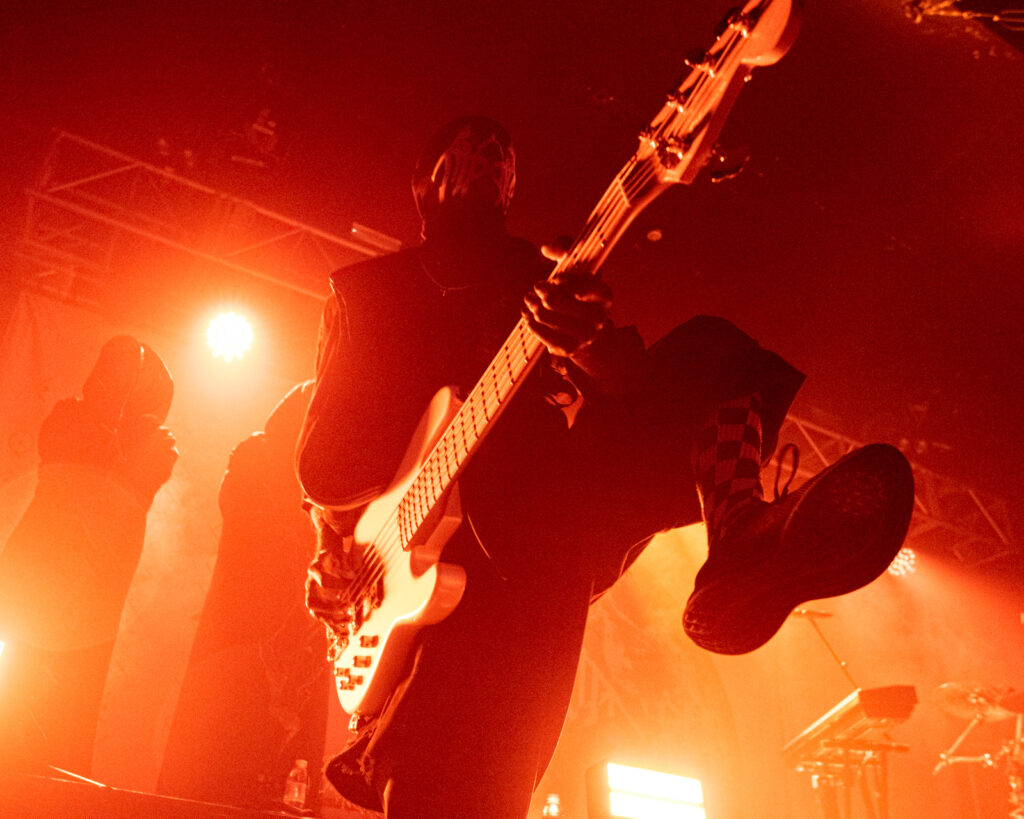 Musically, they’re difficult to pin down, drawing influences from all over the shop, with dynamic prog-metal and so-called alternative metal being the principal flavours. But like their masked contemporaries in Ghost, Sleep Token are not afraid of a powerful pop melody too. It’s easy to imagine some of these songs having their lyrics toned down and retooled with a cheesy, sterile dance beat for one of those indistinguishable autotuned pop girlies. 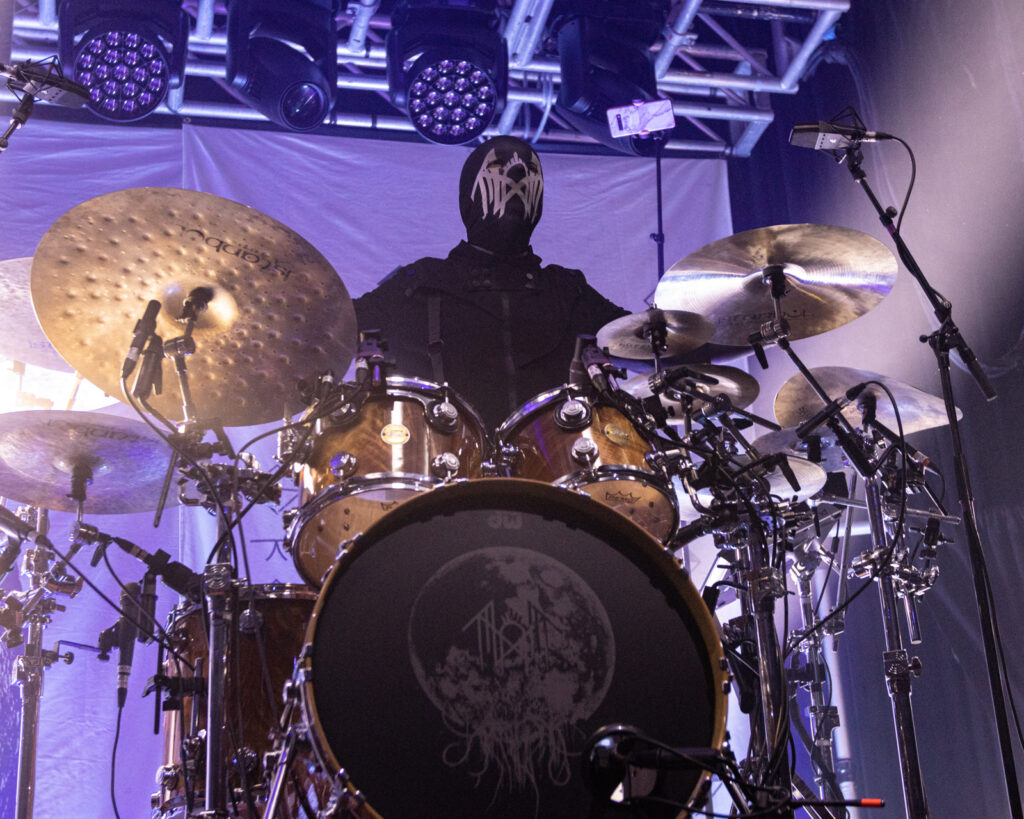 But they might as well be playing in an empty room rather than a packed Academy, as there’s absolutely no audience interaction whatsoever all evening. 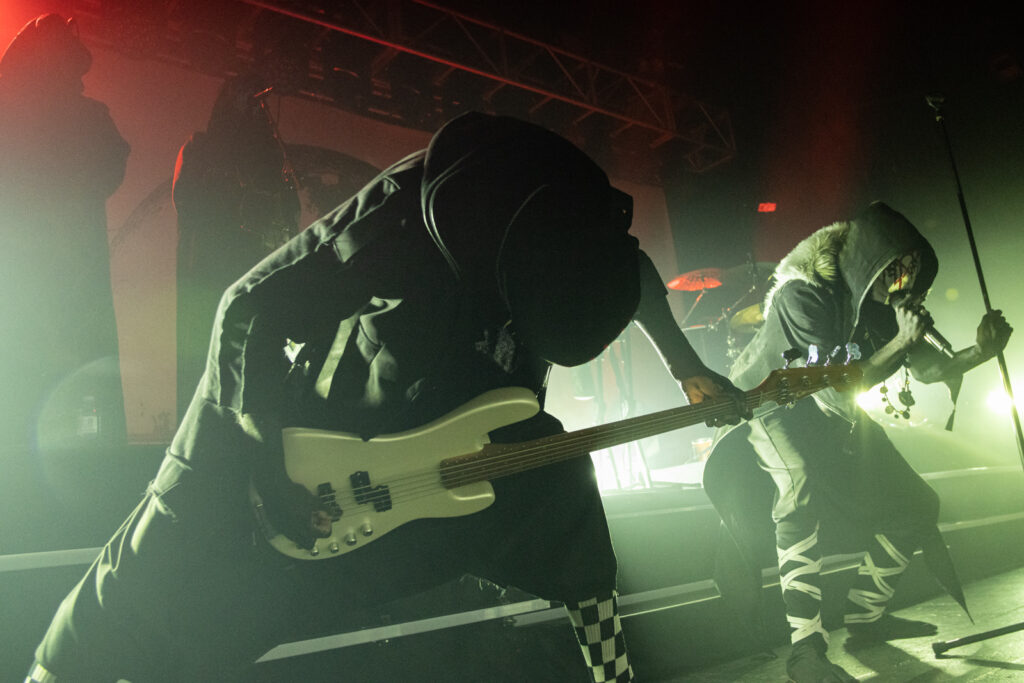 It’s not even clear when the main set has finished as they just wander off stage for a couple of minutes before returning for the two-song encore, which opens with the jolly The Night Does Not Belong to God from the Sundowning album. But Sleep Token will be way too big to play Bristol again unless or until that near-mythical arena opens.