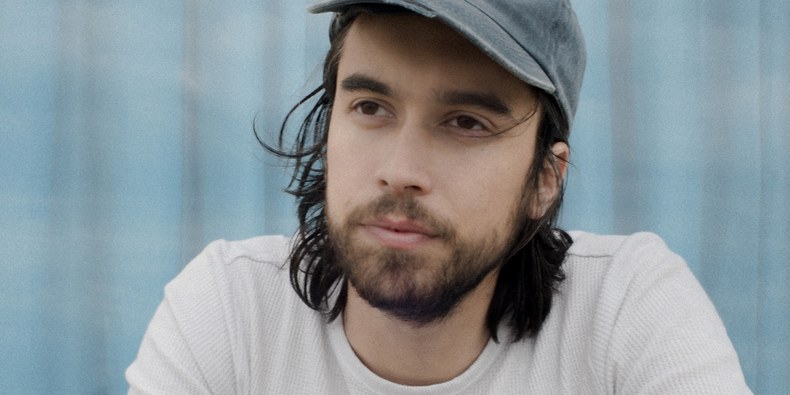 The king of underground bedroom pop paid a visit to Bristol this Valentines day. Bringing his cleverly sweet and aggressive songwriting to a sold out show at Thekla. After his collaborations with Frank Ocean on Blonde, he has found a much wider audience. A much cleaner sound from his earlier work to accommodate a larger crowd but it still has his spiky indulgent sounds that he is best known for.

The gig started with the new local band Pet Shimmers. Featuring local star Oliver Wilde with a departure from his normal folk sounds, favouring a more electronic glitchy sound. With such a large amount of band members on stage, the septet made a large sound. The harmonies between Oliver and Lexie on keys, allowing them to create some beauty and stability. It being a hometown show there were pockets of local fans you could see jumping around and singing along. This didn’t infect the rest of the crowd but it was still an enjoyable set.

The stage went black and silence then followed, this could have been out of anticipation, or a crowd that is cold, wet and low energy thanks to the stormy weather. The first song was a prerecorded song off (Sandy) Alex G’s latest album Project 2. Then, without any introduction they blasted into ‘Gretel’, with Alex taking center stage and performing the song through gritted teeth. It was much more aggressive than the album track, the audience didn’t get a chance to cheer when he came on stage as everyone started singing along.

The audience was well behaved more than anything, often when large artists perform in smaller venues, things can get out of hand. Aghast that he was right in front of us, there was no sense of boredom in the room just admiration. Alex G blasted through songs one after another with no break, it wasn’t until the fourth song that any interaction was had. The classic “thanks a lot for coming”. Clearly he was a man of few words, allowing for his music to take the forefront. The only admission to Valentine’s day was Alex going to the crowd, “Happy Valentine’s day to everyone who is single. This one’s for you.” He then went into ‘Brick’, his most aggressive song with large industrial style keyboard and guitars that wouldn’t feel out of place on a Nine Inch Nails song.

With such a large back catalogue to play and each song sounding different, at random times people would go crazy and then indifferent. A girl I was standing next to went from quickly checking her phone to being in floods of tears in the space of one song.

The cherry on top for me was during the encore, an impromptu verse of ‘What’s My Age Again’ by Blink-182. As a pop-punk kid when I was 13 it was a fun throwback and it got the audience moving the most from the whole night.