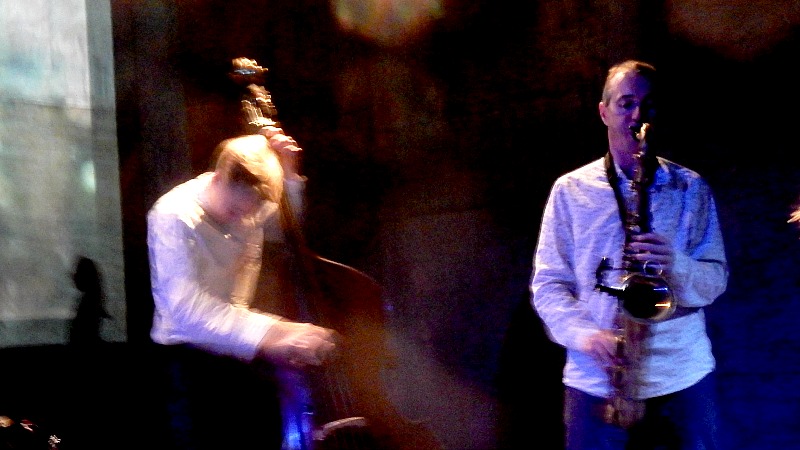 Boy was it hot. By the time the near-capacity crowd had filled the Wardrobe Theatre seats for this album launch event you could begin to feel the air thickening, once the lights went down the potential for drowsing through Eyebrow’s opening set was dangerously high. Happily, however, there was enough going on in the nuanced layering of the music to defeat any eyelid issues.

In fact it was nearly a Monobrow set as illness had struck drummer Paul Wigens leaving trumpeter Pete Judge facing the prospect of a solo set. Fortunately Michelson Morley percussionist Mark Whitlam showed just why he’s held in such esteem by sitting in with Pete and, while obviously not able to draw on the long-established rapport that distinguishes the usual duo, he provided an able enough foil for tunes like Desire Lines and Thaw to unfold elegantly.

It was even hotter when Michelson Morley kicked off with Tamer As Prey, the opening track of new album Strange Courage. Saxophonist Jake McMurchie and guitarist Dan Messore began hunched over their complex pedal configurations coaxing a fine electronic barrage over Mark’s insistent cymbal torrents and an urgent pulsing from Will Harris, slumped around his double bass as if the heat had wilted him. The tune’s uplifting sax theme emerged over all this tumult as it faded away, leaving a weirdly reversed sound paying out as a saxophone chorale.

It was a fine overture, as it is on the album, but the live reading of Armageddon that followed at once took things into a different gear, the dirty bass-line inviting a hard rocking guitar part that built fast and hard into something unhinged. After two minutes of great post-rock jazz the piece rocketed towards a thrash’n burn climax then stopped abruptly. And so it went, the album’s atmospheric pieces reconstructed under Jo Mayes flickering and suggestive images – their scratchy celluloid effects particularly well matched to the portentous Primitive One. That number had Dan’s twanging guitar coming from some kind of Ghost Riders place while Mark coaxed rushing and swishing waves of sound from both his electronic kit and various cymbals.

The Michelson Morley compositional approach is based on structures and rules that allow a disciplined freedom to the four players but the dexterity with which they handle this relies on the fact that each is a great listener as well as player. Thus collisions hardly occur but wonderful moments of euphony do and each number has a definite ambience that might defy more prescriptive writing. It marks out the new material especially, but also adds to the Ethiopique-ispired older track Rice Rage, a fine frenetic finisher that became an acid-thrash workout as all four threw themselves into it at full tilt. Quite how they found the energy for that in what had by then become a complete pressure cooker seemed unfathomable but it was a brilliant final flourish that underlined how well this project had found an identity that promises great things of which Strange Courage is only the first.