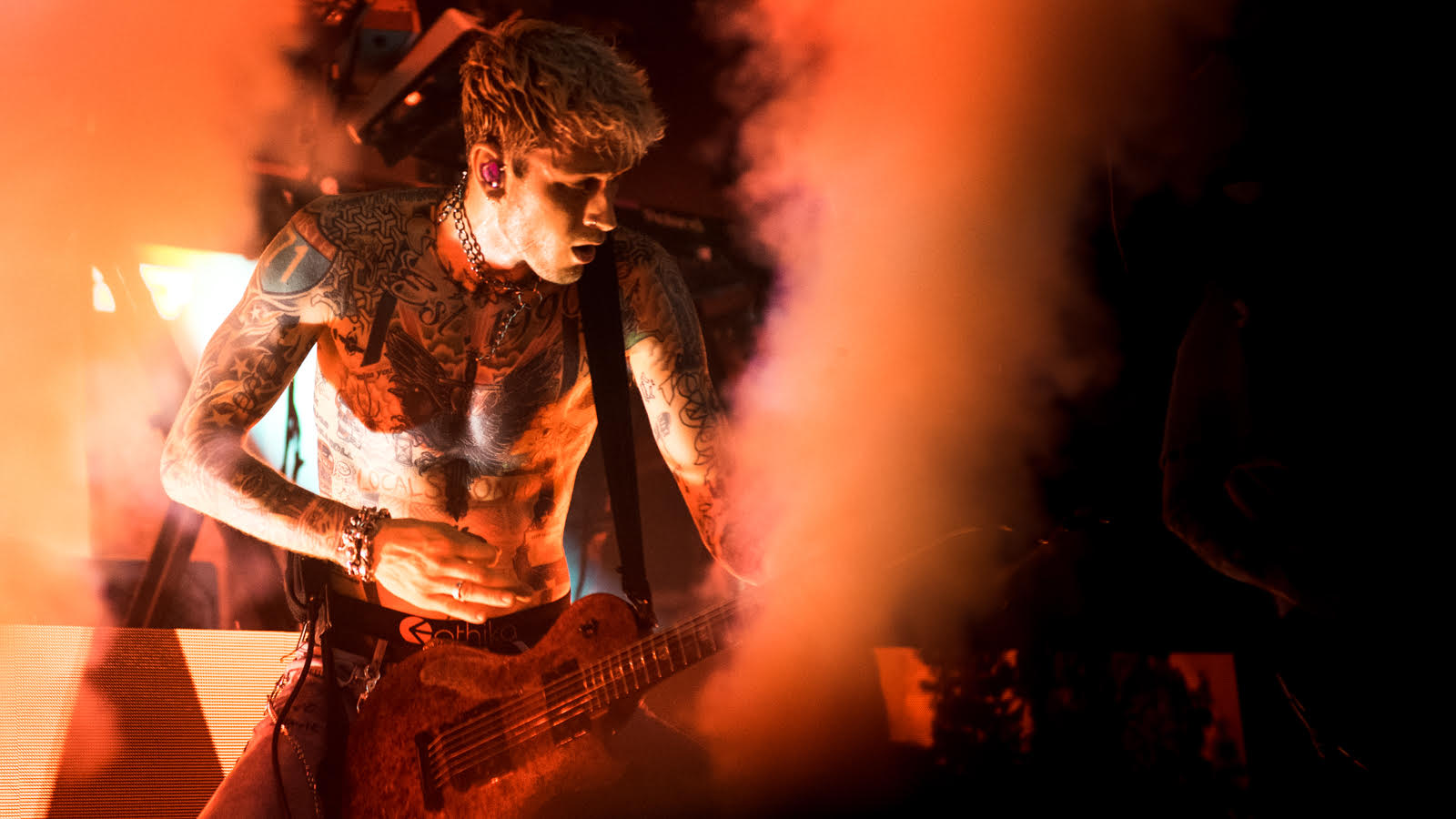 They queued around the block and then some for Machine Gun Kelly on a damp Wednesday evening at SWX.

The dress code was cartoon hair colours, punk rock clobbers, tattoos and piercings. Machine Gun Kelly’s face plastered phone wallpapers, his merch was rocked dutifully, bandanas especially. The smell of weed wafted happily through the crowd. A fully grown bearded man was bawling. I’d never felt more like I had my shit together than in that moment surrounded by die-hard MGK super-fans. 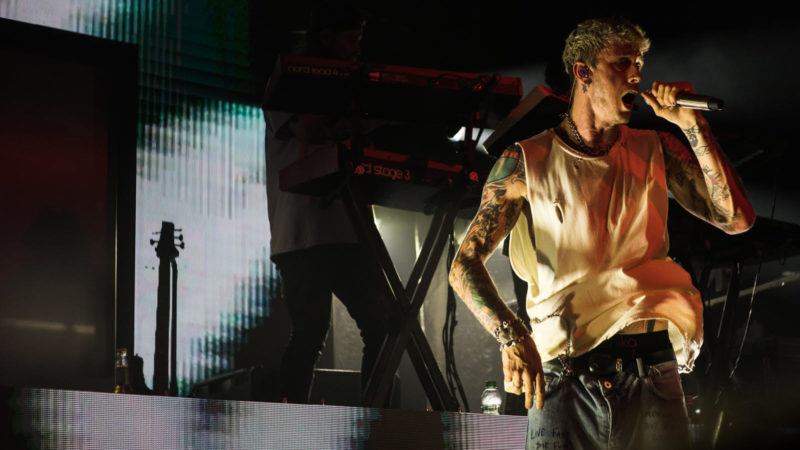 When Machine Gun Kelly, real name Richard Colson Baker, took to the stage he told us a tale of an acting coach of his who, in order to help him perfect a British accent, would have him say the word ‘Bristol’ in an ‘English manner’. He said he loved the word then, even before he knew it was a place. He had been here before and looked glad to be back. He explained how earlier that day he’d been given a bollocking from a bar steward when asking for some American nonsense (a cold brew I think it was) and was told ‘We han’t got none of that shit ‘ere’. 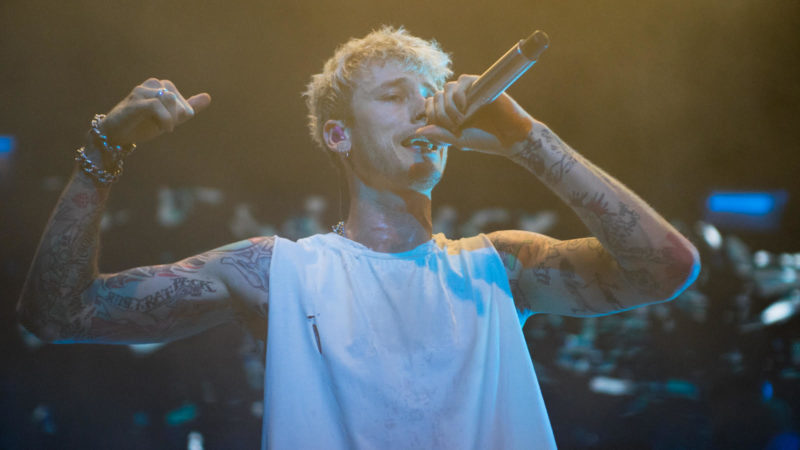 He played his hits and the crowd began to move. The performance, the audience, and the man himself have a rock n’ roll sensibility but an undeniable rap pedigree, and somehow without upsetting either clique, unified them both with rapid-fire lyrics and devilish riffs. It’s quite clever really, perhaps even calculated. Colson was brought under the wing of Sean Puffy Combs at a relatively young age. The man is not the drug-addled lunatic some have portrayed him to be, but a professional. He was clearly born to be a star. He has the skill, ability, charisma, looks, and even the height. I expect the holes in his t-shirt are expertly placed there by the finest punk couturier. 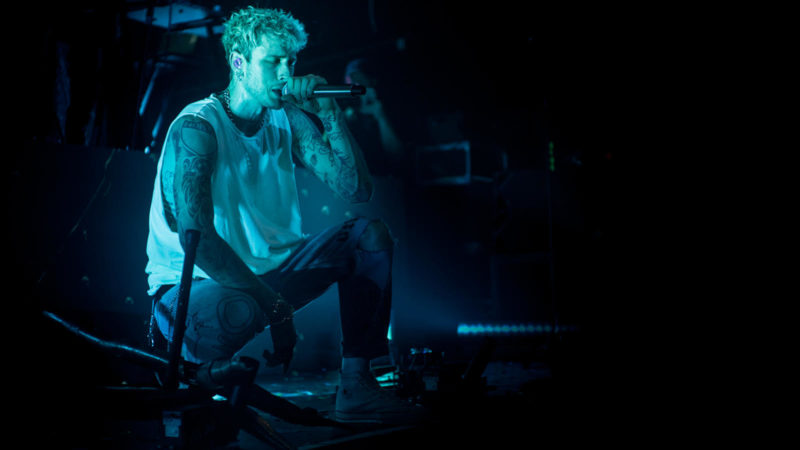 The show was unfortunately plagued with technical difficulties that annoyed MGK much more so than the crowd, who were happy to feed on his every gesture. He began to drink a beer but couldn’t just sip it, the crowd wouldn’t allow it, peer pressure dictated it must be downed and then smashed. He took a working guitar and began to jam for a while, filling time while technicians put the magical fairies back into the instruments. An impromptu rendition of Wonderwall was even heard.

Frustrated by countless false starts, a spliff someone had previously tossed onto the stage was now smoked. Don’t try this at home kids, it could’ve contained anything; how rock n’ roll this must have been for a crowd who predominately wouldn’t have accessed nightclubs pre the smoking ban. 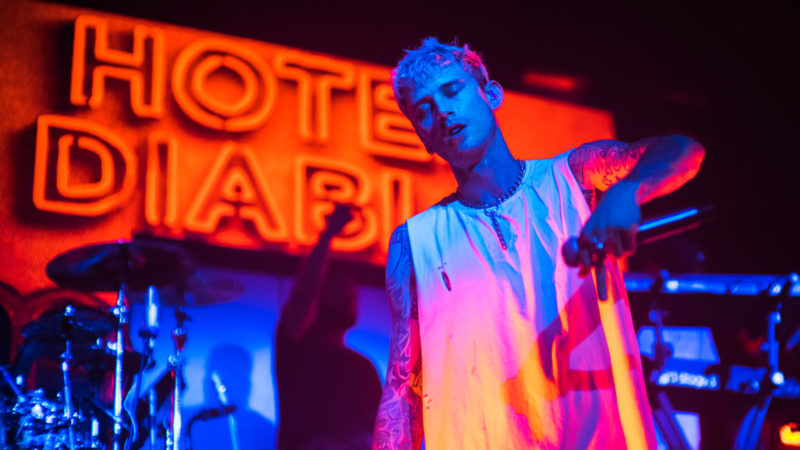 Mr Kelly spat 53666 and clearly took shots at Eminem, and followed up by taking to the drums and rocking out with his guitar. As said by MGK, no one knows what genre he is, not even he is sure. The ‘acting-rapping-rockstar-model’ defies set genres and leaps out of the music industry’s boxes. 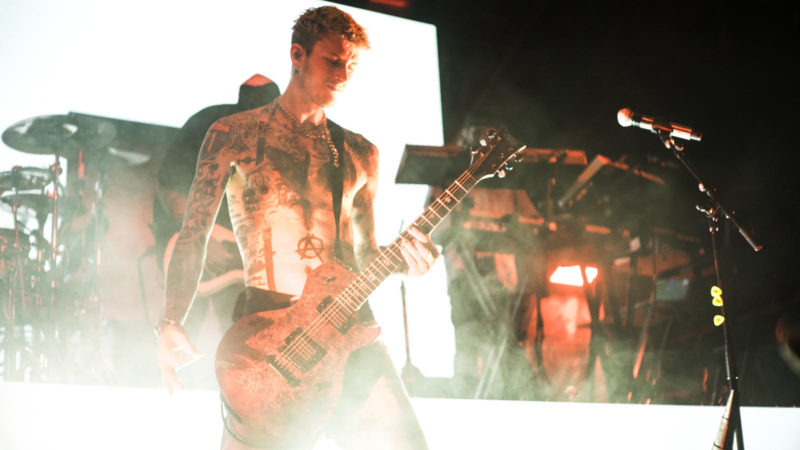 MGK is on the record as saying he likes to work for things. The reward is greater when you have to work for it, like a shave from a cut-throat razor. And you really had to believe him when he said that the technical difficulties made the gig all the better for it, and as memorable for him as all those who attended.

All images by Phil Riley