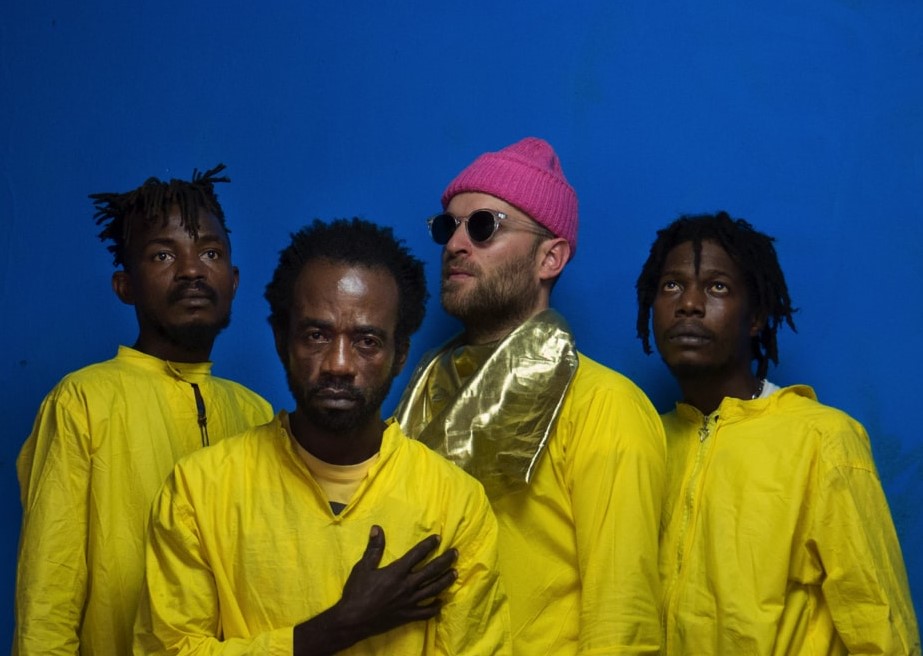 Fiddler’s compact stage is littered with bits of wood connected to paint tins, pots and pans, engine parts and an array of washing up liquid bottles.  Five piece Kokoko! run on stage, yelling through a loud hailer whilst a siren wails behind them, striking in their yellow boiler suits. They position themselves behind these various odds and ends. They are self-invented instruments from the streets of Kinshasa made from found objects. A primitive drum kit, one string guitar, homemade percussive instruments of all shapes and sizes.

This is Kokoko!, festival hit of the summer, delivering their unique fusion of soukous, heavy funk, motorik grooves, clashing with the tropes of contemporary rap and R’n’B and backed by the familiar grooves of modern dance music. They are quite a thing.

Their show is one long street party, energy levels are never allowed to drop. It was direct and raw and in the spirit of punk it is defiantly DIY. In their yellow jump suits they are reminiscent of ’70s alt rockers Devo. Like that combo they are part punk rock, part art project. There is nothing of the stale stereotypes of some world music here, this is a defiant contemporary take on their tradition.

The last decade or so have thrown up a number of bands from Kinshasa becoming the world music buzz bands of their time. Konono No1, Staff Benda Bilili and Mbongwana Star have all arrived with homemade instruments, engaging back stories of forming in the ghettos of Kinshasa, guided by a European music producer with a keen ear for the new. Kokoko! tick all these boxes with a new sonic idea of rooting all this with the clashing grooves of techno, distorted fast rhythms, and a distinctly lo-fi aesthetic.

It is a thrilling show from start to finish. Azo Toke has a nagging hook, shouty call and response vocals all against a deep, heavy groove. Malembe opens with some fuzzy electronics married to a guitar loop that wouldn’t sound out of place on a Berlin period Bowie LP, again with an incessant uptempo dance groove with a defiant vocal on top. Tokoliana is their most instantly engaging groove with clipped electronic percussion married with the most vicious punk funk drumming you are likely to come across.

A packed Fiddlers is sweaty as can be as the street party reaches its climax. They exit as they began with loud hailer in hand and a barrage of percussion. The crowd love them responding as one to their deep grooves, dance moves and winning charms. They are very now, dangerously radical and exciting as hell. Catch them if you can.