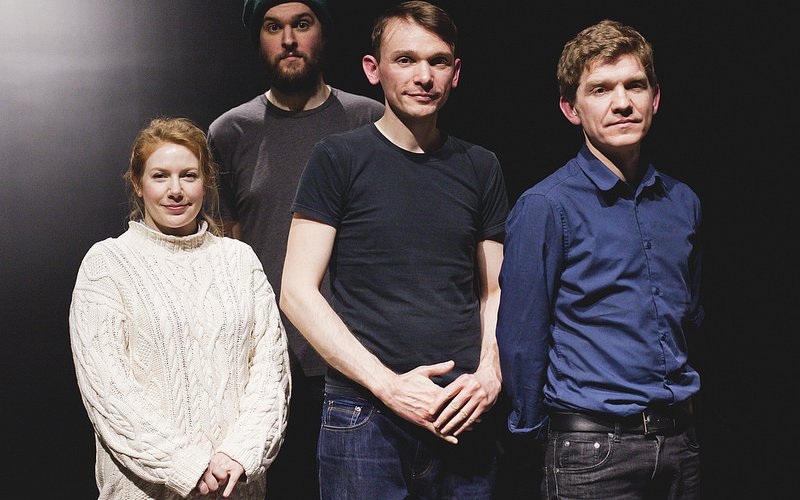 But first, a teaser for the gathered throng. What do shooting yourself for the sake of art, gender reassignment, the invention of ultrasound and sanitary pads, Beacontree Housing Estate and an office worker in the German treasury making the last reparation payment 101 years after the end of the First World War all have in common?

A tricky one I know. All of the above have in someway or other, provided as inspiration for the tunes on their latest LP. There’s a fact you can trump your friends with. A concept piece – a thematic song cycle if you will – based on reviewing events since the end of the Great War from unusual angles. Initially an instrumental piece commissioned by The Imperial War Museum and eventually becoming Making A New World. We couldn’t be farther away from boy-meets-girl here and certainly from cocaine binges in smashed hotel suites. Difficult to think of anything more unsexy, more un rock ‘n’ roll, or a trickier starting place for a set of contemporary art rock songs.

This might all sound a bit worthy, a bit too much like hard work. Happily we are saved by the bands’ song writing team, brothers David and Peter Brewis, having PHD’s in avoiding accusations of pretension. Between-song banter is amiable, sharp and funny. Unassuming doesn’t begin to describe their genial presentation. They have the air of the winner of a local community music prize who have just found out, to their great surprise, that they are really rather good at this sophisticated pop malarkey and are overjoyed to still be playing this proggy art rock stuff 15 years into their career.

Field Music are one of those bands that it’s not easy to avoid playing influence bingo with. Angular XTCish noise, tick. Todd Rundgren ballad harmony, tick. A bit of Robert Fripp guitar noodling, tick. A bit that reminds of Peter Gabriel 3, definite tick. A nicked Kate Bush backing vocal. House, house… I claim my Talk Talk box set. The Brewis boys clearly have an encyclopaedic knowledge of the art rock of the past 50 years but have found a fresh soup out of all these apparent influences whilst still managing to sound as fresh and new as ever.

Tonight’s brief-ish set is a run through of the most memorable songs off the new record. The between song Eno-esque instrumental passages, which give the LP the air of a soundtrack, are left for another day. We are also treated to a sprinkling of gems from the Field Music back catalogue and an interlude of Trump Bashing from one of David’s solo projects, to provide some light to the considerable shade of the new material.

The new stuff doesn’t have the immediate hooks of ‘The Noisy Days Are Over’ or ‘Disappointed’ but there is some pretty smart writing here. ‘Best Kept Garden’ is all jerky, packed with angular guitars until a lovely McCartney-esque melody takes over and then closes out with one of those Bob Fripp guitar bits. ‘Do You Read Me’ can be added to the long list of great pop tunes about ground to air radio. Again we are in knotty post-punk territory musically until a bridge is found with a keyboard led section with those Kate Bush backing vocals. It’s all very smart, grows on repeated plays and crucially doesn’t outstay its welcome.

The album and the main set tonight close with ‘Only In A Man’s World’, a piece of white-boy funk that sounds like a slightly under produced outtake from Remain in Light. Lyrically we are analysing the politics of sanitary towel advertising. Finally they leave us with the Chic-lite funk of ‘Money Is A Memory’. It has the most memorable hook on the album and is the tune that perhaps sits most readily with Field Music’s recent output.

The Rough Trade crowd greet them warmly. It’s been an evening of high-class musical chops, multi-layered song writing and concise, melodic tunes. They’ve been doing this for a while now, but delivered with their likeable, everyman personas it is difficult not to applaud their ambition in taking on this source material and finding new gems in the well-panned stream of white-boy art rock. Let’s hope they continue to find new angles to keep this as fresh sounding and innovative as they have this time around.