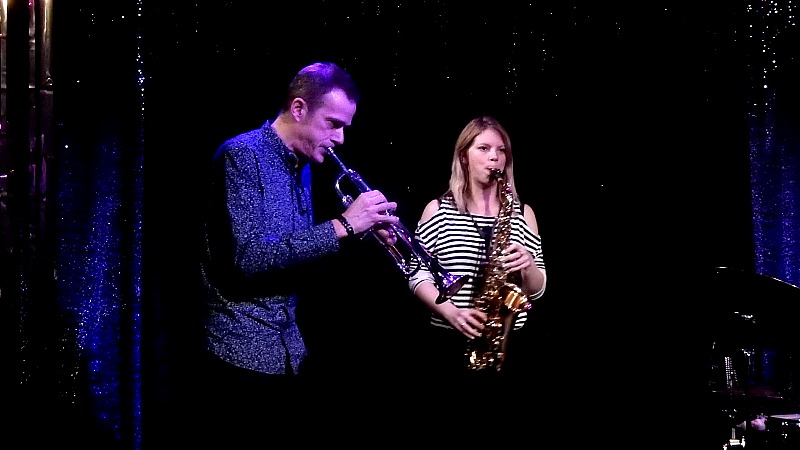 If only it was always that simple. Within minutes of the Wardrobe’s sell-out Christmas theatre show crowd leaving there was brass’n’drums outfit Dakhla Brass all set up and ready to go. The joys of acoustic performance, however, really aren’t that simple and it says much for the listening skills of the five musicians involved (especially drummer Matt Brown) that they delivered a superbly balanced sound that gave each player an equal space to be heard.

After a fairly tumultuous year it was also impressive that the band were revealing an almost entirely new set of tunes many of which offered more intricacy and structured complexity than even their own previous work. Lotus for instance began with a familiar groove swathed in a lush brass wash but soon slipped into 60s film noir mode with Liam Treasure’s coasting trombone voicing a bitter-sweet story that Sophie Stockham took up on alto sax. The piece unfolded, measured and cool, before shifting up a gear to rush to a snap ending.

It had a definite jazziness in contrast to impending single Silver & Gold which was more of a post-jazz chamber composition with filigree sax parts and eloquent trumpet played against sporadic drum and cymbal outbursts. The arrangement’s finely-honed construction recalled trumpeter Pete Judge’s art-folk outfit Three Cane Whale, as did Charlotte Ostafew’s Insomnia Sonia with her baritone sax providing the relentless tick of a bedside clock against the fractured drums and chattering trombone of a fevered imagination. The resolution of the tune into a lulling trombone part was a tangible relief from its sleepless tension.

Both these new pieces represented a further development of the Dakhla Brass style, emphasised by the more familiar Gorilla, Gorilla, Gorilla with its barking baritone bassline and seething drums under layers of brass that built a formidable sound wall only to wrench it back. Much of the Dakhla Brass sound rests on a contrast between disciplined brass arrangement and restlessly creative drumming and while this remained true nonetheless there was a more even handed sharing of the jazz element in the new tunes that gave the pieces interesting textural variety. Clearly unfazed by their 2016 success it was good to hear them continuing to head onwards and, hopefully, upwards.