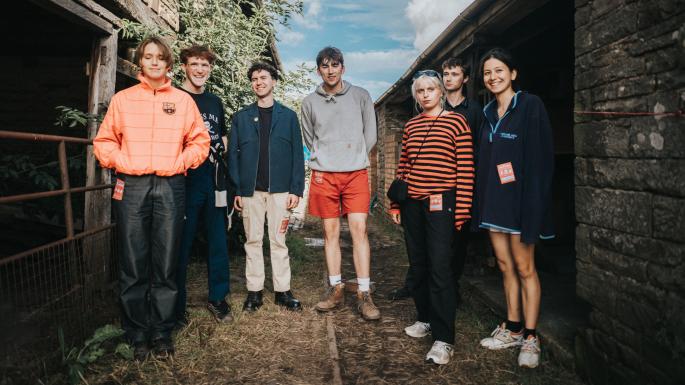 The appeal of London based jazz-rockers has swept the nation, Black Country, New Road have sold out every single date on their UK tour. They’re intriguing and dynamic, it’s evident that on the back of this tour, they’ll gain an awful lot of traction and a hefty fan base. Their online presence is dominated by memes and lacking in official releases – again, another thing which perks my interest along with several others at their sold out show at Thekla.

I head in just as post-rockers Death Crash begin their set, sombre guitar playing which built an atmosphere and laying the foundations for pockets of groovy bass to seep in. At times I did find it a little monotonous and predictable, it’s nothing I couldn’t see at The Old England jam on a Tuesday night. There were some moments of clarity which worked really well, the fuzzy guitars and cold deliverance from the vocalist fused nicely and was reminiscent of the early days of Sonic Youth.

Septet Black Country, New Road filled the stage, it seemed as though they were doomed from the start with several sound issues throughout the night. Sauntering on in sports gear and baggy jeans, they filled the archetype of ‘art school dropouts’ that ‘just want to make music, man’. From the get go, the sax player was having sound issues, confused glances were thrown and the frustration was evident. It was difficult to watch and not feel for them. Nonetheless, they stumbled through their first number which was an instrumental filled with woozy synth runs and jazzy Afrobeat percussion. It was a beastly tune which left its impression on me despite the sound complications.

‘Athen’s, France’ is addictive, the interludes of chaotic unison are deeply intense all topped off with a ferocious vocal performance. It’s visceral, raw and reflective of the dark and intense lyrics which are lathered in pop culture references. The Ian Curtis-esque jerkiness is palpable and borderline unsettling. What Black Country, New Road are doing is inherently interesting, they amalgamate so many corners of different styles and genres and really make it their own. Contorted sax solos which scream The Comet Is Coming, combined with an air of Talking Heads. It’s dynamic, exciting and unlike anything I’ve heard for a long time. Some sections were deeply rooted in contemporary jazz whilst others had a much more EDM backbeat to groove along to.

It goes without saying, drummers really have the ability to make or break a show, in this case it was both of the above. Drummer Charlie held down a meticulous and tight beat, often holding things together whilst the others figured out their sound issues. The break is referring to the ride cymbal which flew off shortly before their gig finished.

Their stage presence was a little stiff at times, barely interacting with one another and only to communicate the sound issues. I’m not sure whether or not this is part of their aesthetic but it did leave a bit of a sour impression. Very little was said throughout, no ‘thank yous’ or anecdotal musings, I guess that’s what their lyrics compensate for. You’d be daft not to have Black Country, New Road on your radar, an enigmatic show overall, just a shame about the sound problems.