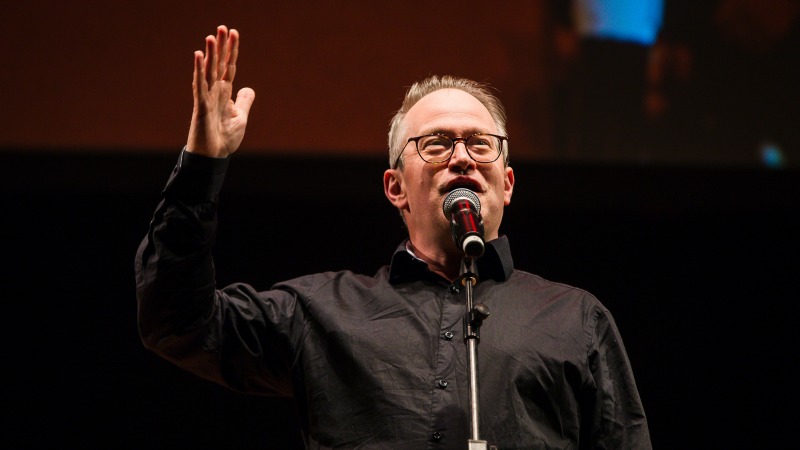 Sometimes the best thing to do in the face of adversity is to laugh at it. With the inauguration of a dangerous right-wing clown just the previous day, Saturday evening’s programming for this year’s Slapstick Festival was the perfect antidote. Or, as Ian Lavender (Dad’s Army’s Pike) described it before the screening of Charlie Chaplin’s classic 1940 satire on tyranny, The Great Dictator: “Next up, our tribute to Donald Trump…”

Previous to this was a trio of Chaplin’s comedy shorts for the Mutual Film Corporation introduced with gushing and overly long luvviness, but obvious admiration, by actor Simon Callow. The Vagabond (1916), The Pawn Shop (1917) and Easy Street (1917) are all comedy gold, with Chaplin utilising all his slapstick skills and subtly hilarious expressions and movements, and all three films were accompanied here with an excellent live musical score by the European Silent Screen Virtuosi. The trio of Gunter A. Buchwald on piano and violin, percussionist Frank Bockius and double bassist Romano Todesco provided a seamless soundtrack which fitted so perfectly with the films that you forgot that it wasn’t actually recorded background music.

But to the evening’s main event – and, fittingly echoing J.B. Priestley’s words, “Comedy is society protecting itself with a smile”, the brilliance of The Great Dictator which Chaplin directed and starred in seemed to mirror and parody the depressing events unfurling across the Atlantic.

David Robinson introduces the screening of ‘The Great Dictator’. All pics: David Betteridge

For all the slapstick and laughter, the message of Chaplin’s masterpiece is clear and captured eloquently and powerfully in the closing speech, widely acknowledged as one of the greatest ever made. A forcefully emotional plea for peace and an exhortation of hope in the face of tyranny and oppression, intolerance and racism.

As compere Robin Ince put it eloquently in his introduction: “Now is the time, more than ever, for aggressive kindness.”