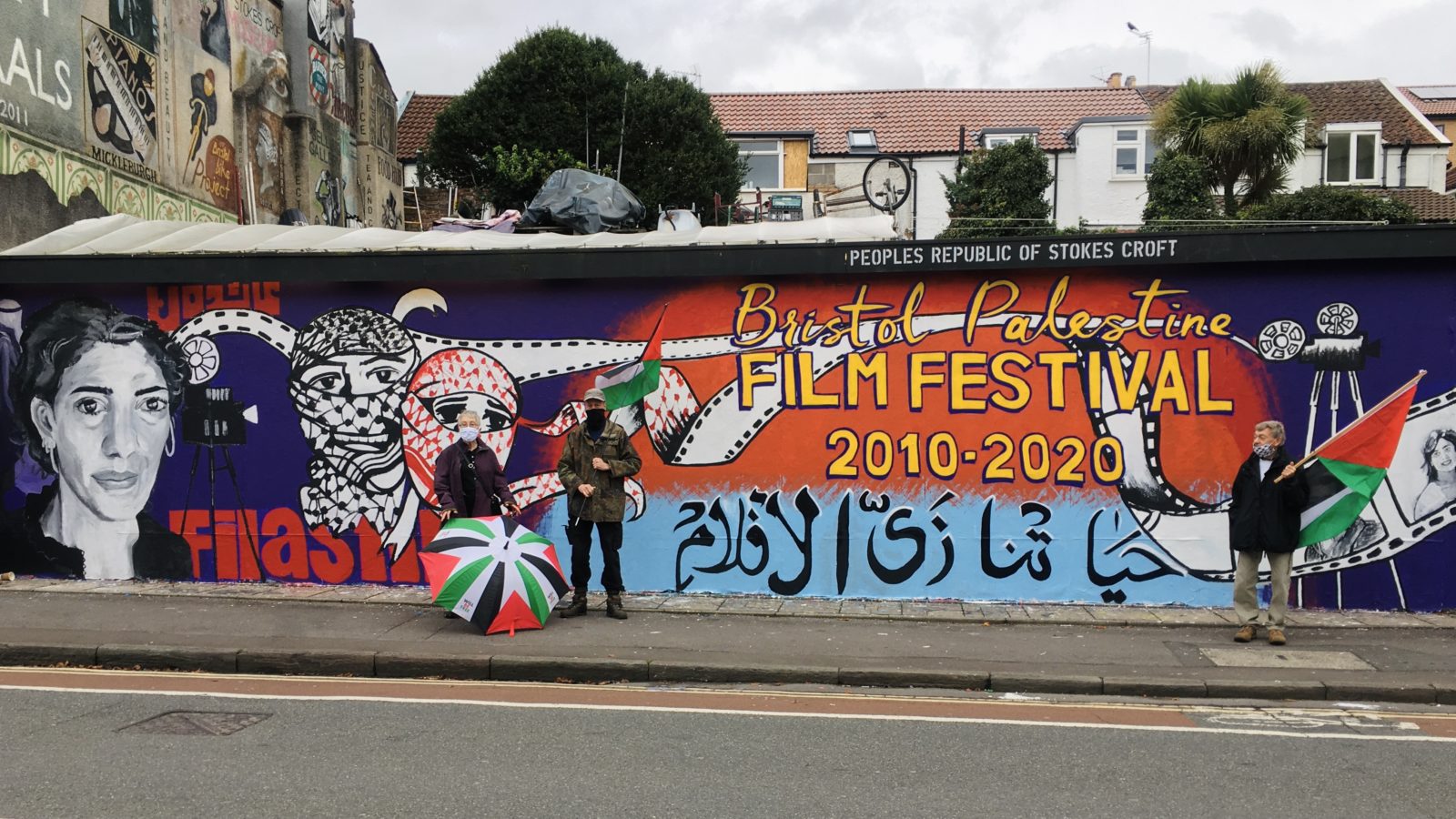 A tribute to Palestinian cinema will adorn a prominent Stokes Croft wall until early December.

The mural outside Peoples Republic of Stokes Croft (PRSC) on Jamaica Street is a celebration of film from the country, and coincides with the Bristol Palestinian Film Festival‘s tenth anniversary.

Designed by Bethlehem-based artist Taqi Spateen and featuring four prominent figures of contemporary Palestinian filmmaking, the mural celebrates the work of the filmmakers we’ve featured at Bristol’s film festival over the last decade and hopes to raise awareness of the festival, its work and Palestinian cinema.

The Bristol Palestine Film Festival was started by David Owen after he visited Palestine with the Easton Cowboys football team. David was amazed at its culture but shocked by its injustices. He created the festival to offer the people of Bristol an insight into the lives and culture of Palestinians through showing their films.

The artist wasn’t able to come to Bristol to paint the mural, which changes each month, so painting was completed by community artist volunteers, led by PRSC’s Benoit Bennett. 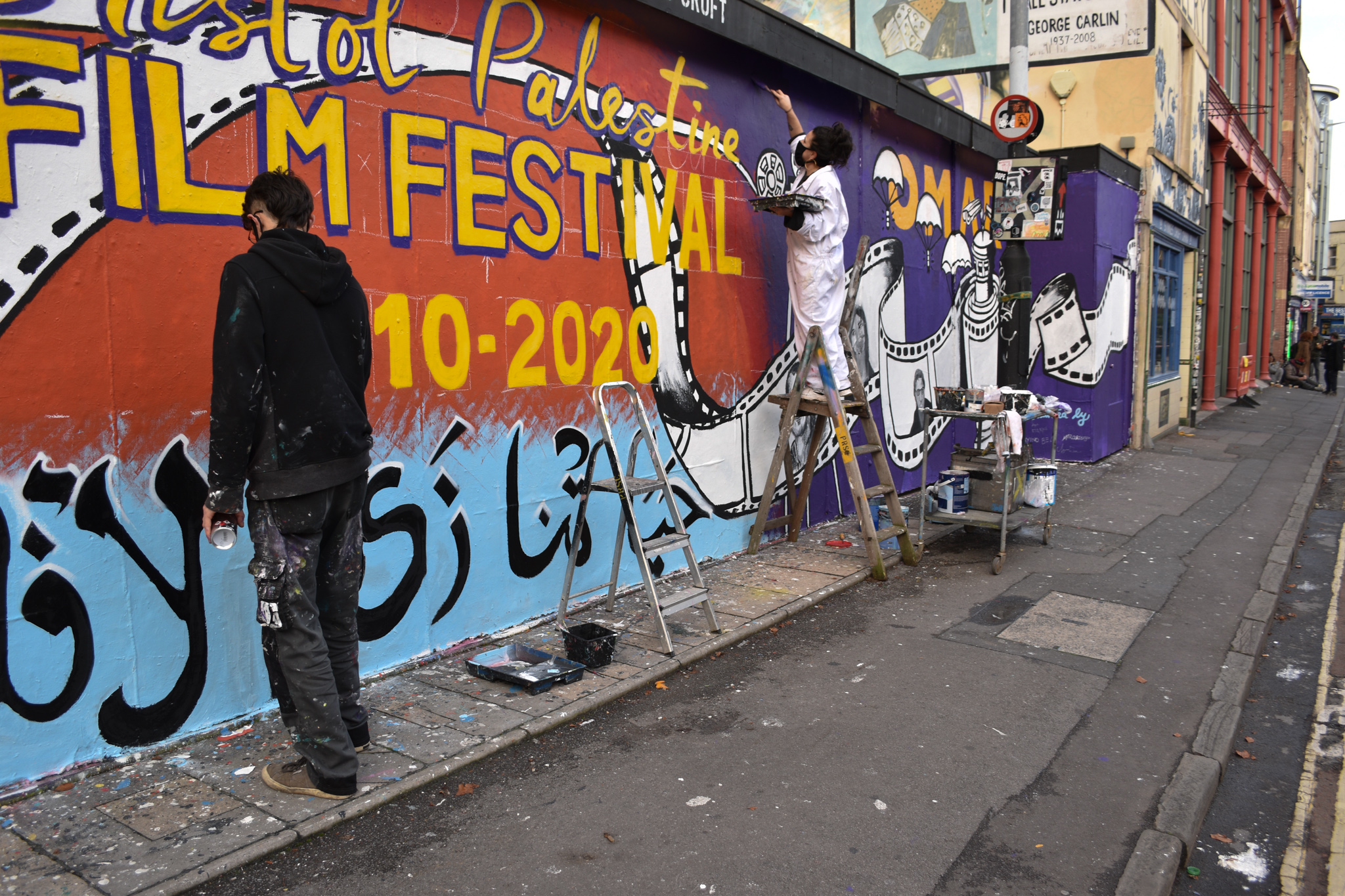 Spateen’s design features Annemarie Jacir, Muayad Alayan, Najwa Najjar and Mohammad Bakri. Between the four individuals, they have created films including The Reports on Sarah and Sadeem, Salt of This Sea, Pomegranates and Myrrh and Jenin, Jenin.

Each of the four people featured has caused shifts in Palestinian cinema. Jacir became the first Palestinian woman to direct a feature film in 2007, Alayan is a co-founder of Palcine Productions, a collective of filmmakers and audio-visual artists in Jerusalem and Bethlehem.

Najjar was recently elected to the Academy of Arts and Sciences (Writers Division) 2020, with her films shown at more than 80 festivals. Bakri is predominantly an actor, but has also directed two documentary films, with the controversial Jenin, Jenin, resulting in the Israeli state and right-wing groups in Israel attacking him and attempting to ban the film.

Creation of the mural has been organised by Steph Read and Bristol Palestinian Film Festival trustee Alix Hughes.

The 21-year-old, who recently graduated from the University of Bristol and has attended the festival for four years, encourages people to head to the mural during lockdown there, adding “it can give your exercise walk a bit of purpose!”. 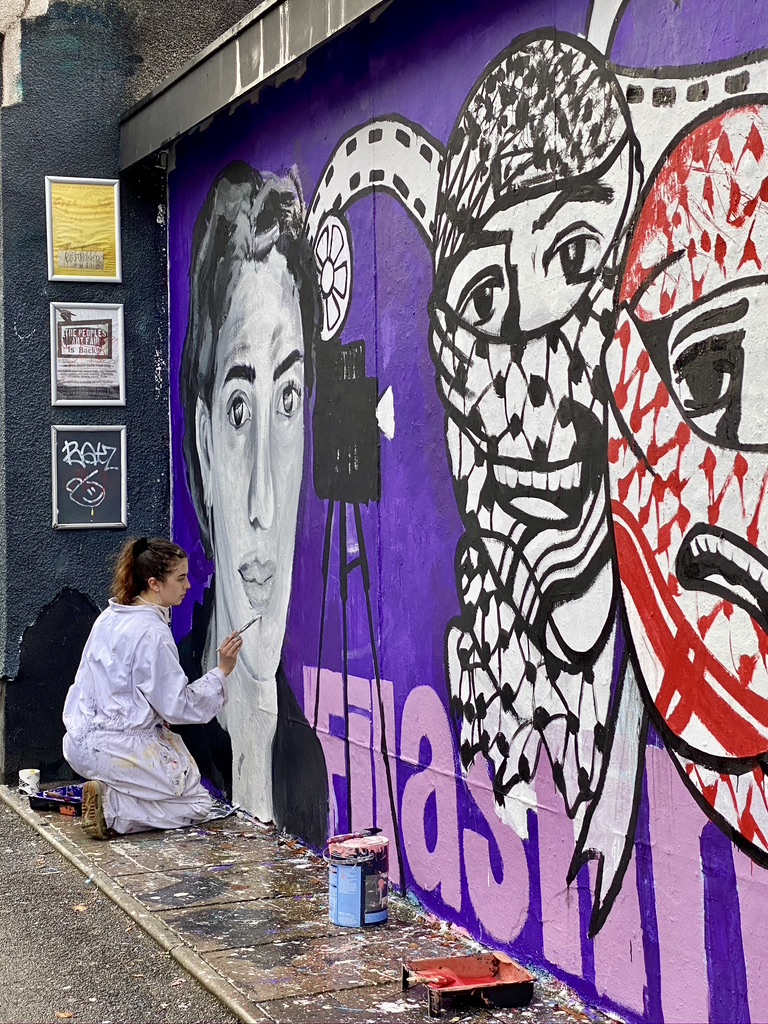 The mural will be in place until December 7. Photo: Karena Batston

There has been uncertainty over the festival’s tenth year programme.

“The film exhibition industry has faced a lot of disruption recently,” says Steph. “Currently, our plan is to screen ten Palestinian short films online over ten days in early December.

“The films will be available to watch for free, but a £10 donation by viewers would be very welcome.”

While Steph and the team who created the mural look forward to watching Palestinian films in cinemas again, they are looking forward to celebrating the tenth year of the festival and thank cinema-goers who are continuing to support film.

Read more: ‘The aim of Bristol Palestinian Film Festival is to give a voice to Palestinians’