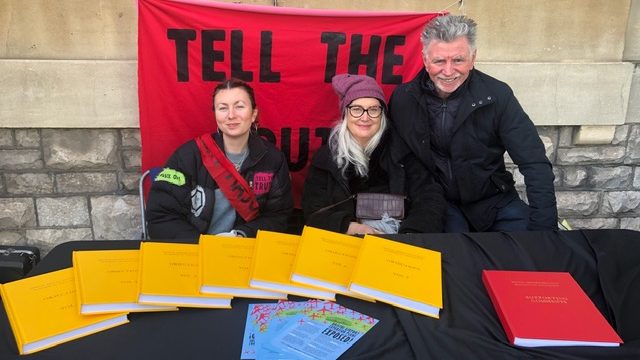 The same year, Bristol Airport filed for planning permission to expand its operations. Then, the UK government declared a climate emergency and North Somerset vowed to become carbon neutral by 2030. The increasing tension between business as usual and the encroaching climate breakdown was ratcheted up once again.

Bristol Airport applied to increase its capacity from ten to twelve million passengers per year on 20,000 extra flights, including 4000 night flights, and more than 3000 car parking spaces on the greenbelt.

In an unexpected win for campaign group Bristol Airport Action Network, which included various XR groups, 27 North Somerset Parishes, and numerous scientists and academics, the plans were rejected by North Somerset councillors who said the environmental and societal impacts outweighed the economic benefits of the expansion.

The result was the culmination of a hard-won battle – “a war of attrition,” as Green Party for Southville councillor Stephen Clarke puts it. “When we sat down at our first meeting at the beginning of 2019, in our hearts we thought there’s no chance of actually winning this,” he says.

But the facts are in their favour. Dr Adrian Gibbs, who works in the Bristol branch of environmental consultancy Eunomia, estimates that if the airport eventually expands to 20 million passengers per year (as is likely to be its long-term goal) then 4.5 million tonnes of CO2 could be emitted per annum by 2040. To put this in perspective, the whole county (excluding the airport, large industrial sites, railways, motorways and land-use) emitted just over one million tonnes in 2017 according to statistics published by BEIS.

Adrian calculates that to offset the expansion of the airport to 20 million passengers per year – excluding the current operation – it would be necessary to reforest an area the size of North Somerset every four months.

His number-crunching also throws into question the airport’s claims to be working towards carbon neutrality by 2025.

After the planning meeting, Bristol Airport chief executive Dave Lees said the decision risked “putting the brakes” on the future growth of the region when other areas are forging ahead. Bristol Hoteliers Association released a statement stating they were “disappointed and surprised”.

Although Bristol Airport insists that local businesses stand to benefit from the expansion, a report by NEF Consulting for CPRE (Campaign for the Protection of Rural England) on the expansion suggests it may have overestimated both passenger demand and economic benefits to the region. And of course, it’s the owner of the airport that stands to benefit the most from the expansion: the Ontario Teachers’ Pension Fund, a $201 billion fund which has stakes in several European airports. 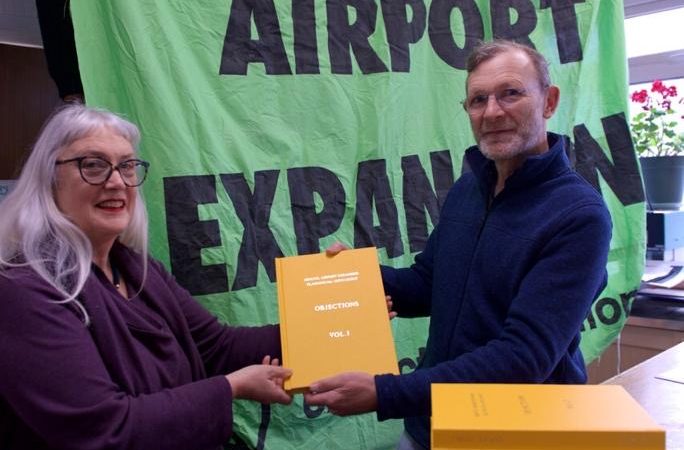 One million words were written against the expansion – and just 100,000 in favour. Photo by Stephen Clarke.

Demand management and behaviour change on an international level is the only way to stem the negative effects of aviation on the climate. At our regional – but no less important – level, the planning decision suggests the tide is turning in favour of climate science over business as usual.

Because the committee went against the planning officer’s recommendation, the decision will have to be ratified by the council at a future meeting, which Stephen believes will happen in March.

“If the decision is ratified, the airport can then appeal to the planning inspectorate who can decide to ‘recover’ the application,” he says. “They probably will, which means there will be a public inquiry which I estimate will take nine months to a year to organise.”

“Delay is our friend. The government has a consultation paper on aviation strategy coming out in April and we’re hearing that the legislation from that will be in place likely towards the end of this year – before any appeal is heard. That legislation has to reduce the impact of aviation, otherwise carbon neutrality by 2050 will be completely impossible. So we’re pinning our hopes on that.

“What we’ve learned is that against all odds, a community is able to come together if they’re organised and committed, and defeat an opponent as hugely rich as this.”