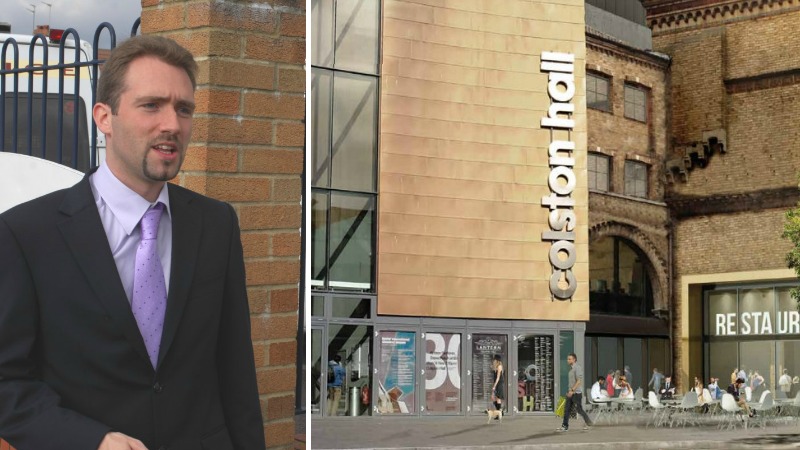 I read with interest the renewed calls for the Colston Hall to be renamed over the appropriateness of recognising Edward Colston as a public figure in the city. These aspects of Bristol’s slave-trading past will always be with us, and we shouldn’t shy away from them.

To start with, I’d like to point out that it’s the norm these days for big public venues to be renamed to honour sponsor companies in return for flippin’ great wads of cash (e.g. Emirates Stadium) and if that happens to the Colston Hall then I don’t have any issue with it; though I bet if it becomes the Tesco Hall w’ll see plenty more Twitter outrage.

But on the point of whether the hall should be renamed specifically because we shouldn’t be recognising the name of the person whose trust originally owned the buildings on that site – because he was involved in the slave trade – then I think it’s a misguided line of thought.

It’s important to be clear about the historic timelines involved here: Colston made his money mostly between the 1660s and 1690s (his 30s to 60s in age). This was over a century before the well-known Abolitionist movement was led to victory by William Wilberforce and the Clapham Saints, who were active in the 1780s to 1840s.

While there was opposition to slavery in Colston’s time, it wasn’t mainstream opinion, and it doesn’t make sense to condemn people for not thinking or doing things that weren’t mainstream at the time.

Pope Innocent XI did criticise slavery in 1686, but given that it was basically illegal to be a Catholic in England when he said it, it had very little impact (and in any case, the Pope also criticised abortion, gay marriage, contraception and divorce as recently as a few years ago – should we accept that?).

Enlightenment philosophers started to come out against slavery from the mid-1700s – e.g. Montesquieu, The Spirit of the Laws (1748) – but it’s important to remember that these were often considered dangerous and even criminal or treasonous works of political literature at the time.

The key point in English history was the legal case of Somerset v Stewart in 1772, which effectively made it impossible to have slaves in England itself, and started the Abolitionist movement proper. Shortly afterwards, the young northern US states started banning slavery and Britain started smashing the international slave trade from 1807; although it wasn’t abolished throughout the whole empire until 1833 – about 150 years after Colston was at his peak.

There’s little doubt that if Colston had been alive and slave trading after the Somerset ruling in 1772 it would be absolutely right to condemn him, but he had been dead for a long time by then.

The political left has tied itself in knots recently trying to get to terms with these issues of cultural morality and history, on the one hand wanting to display virtue by condemning historic figures even though they behaved according to the norms of their times, but at the same time turning a blind eye to extremely regressive practices among some cultures in the UK in the here and now  for ‘cultural reasons’ – despite those people living immersed within a national culture where such practices are clearly deemed unacceptable.

The desire to scrub away Colston is part of a wider, slightly disturbing political movement to erase from public view anyone who doesn’t conform to modern norms – be it Colston, Rhodes, Churchill, Cromwell, Roman emperors, etc.

Yes, we probably wouldn’t put up statues or buildings to Colston today, but we wouldn’t put them up for the extremely brutal Henry VIII or William the Conqueror either – so should we dismantle all of those as well? That would just be philistinism.

And it’s worth bearing in mind that Native Americans aren’t exactly thrilled about honouring people like John Cabot – whose publicising of his new sea route to North America triggered the wave of migration that destroyed their native civilisation. The logic of judging the past by a modern context leads eventually to renaming the Cabot Tower and ever onwards.

We should also ask the question of why we even know Colston’s name. There were hundreds of slave traders in Bristol over the centuries; can anyone name one other than Colston? Why is this? Well the reason is that every other Bristol slave trader kept all their ill-gained money for themselves within their families. That wealth no doubt continues to trickle through countless nameless Bristol families today. Yet the only slave trader who showed concern for the poor and gave a great deal of his wealth away to the people of the city, is the only one whose name is vilified today. That’s a perverse kind of logic, isn’t it?

If a sponsor comes along and dangles money to get their name instead on the Colston Hall, then it would be daft to refuse. This is the norm these days and we can really do with the money. But if the renaming is purely to signal some kind of judgement on people who died centuries ago, then it is misguided in my opinion.

And finally I want to say, those who have been picketing schools that have association to Edward Colston, they are behaving quite shamefully. Intimidating children because of the actions of a man in the 1680s is low by any standards. Let’s leave the children out of this debate.

Mark Wright is the Lib Dem councillor for Hotwells & Harbourside