While Brexit chaos continues to wreak havoc through the walls of Westminster, Bristol councillors brought the debate closer to home.

Harriet Clough, a Lib Dem councillor for Hengrove and Whitchurch Park, proposed a motion to the council chamber, calling on the city to lobby the Government for a People’s Vote on whether or not Britain should leave the EU.

But the action ultimately voted through was a watered-down pledge to raise concerns with key politicians about the impact of Brexit, after Labour submitted what was branded a “wrecking amendment” by opponents.

This means that Bristol City Council will not follow in the footsteps of other Labour-run councils in actively lobbying for a second referendum on the UK’s exit from the EU.

The original motion was backed by Bristol For Europe:

Speaking in the public gallery ahead of the vote, Max Langer said: “As a city, we should have a frank discussion about how we can protect Bristol and its people should Brexit come to pass. I implore you to use your soft power to give the people a second vote.

“The referendum was criminally short of any picture of what Brexit would look like. Don’t sell off my generation’s future – if you believe that Brexit in any form will harm Bristol, then fight it.”

Proposing the original motion, Clough, outlined the shambles the Government is left in two years after the EU referendum and the threat to major employers, universities and the NHS.

“At the crux if this motion is a call for the mayor to take a stance that represents the city – advocating for all the things from which is has benefited: the freedom of movement that keeps companies such as Airbus, Rolls-Royce and BAE in the city and investing money in our local economy, and mutual support that has brought investment into some of our most deprived communities.

“And for the open and tolerant city of which we’re all so proud that it has helped to foster.”

Martin Fodor, a Green councillor for Redland, seconded the motion and urged mayor Marvin Rees to consider key points, including national security concerns of Brexit, the future of university research and the benefits of mutual exchange and collaboration. 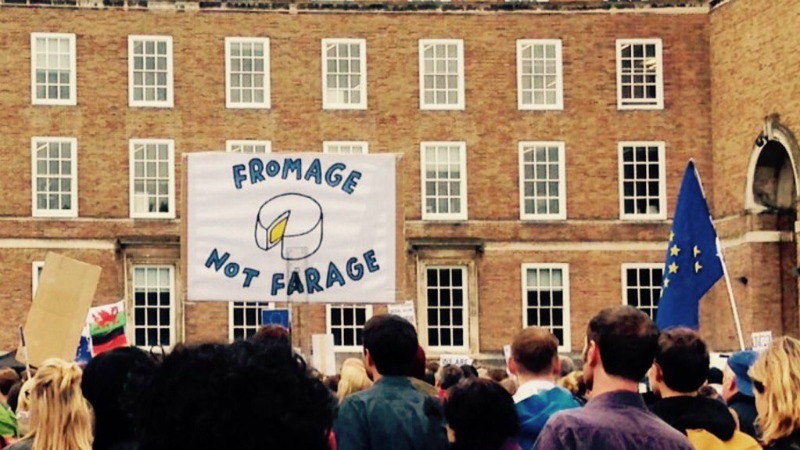 The majority of people in Bristol voted to remain

Estella Tincknell, cabinet member for equalities, culture and events, stated that the amendment submitted by the Labour party cuts down some of the waffle to identify actions.

“I have little confidence that Brexit means anything other than the destruction of the British economy,” she said.

The amendment called for letters to be written to Bristol’s four MPs, the prime minister and newly-appointed Brexit Secretary Dominic Raab.

Charlie Bolton, a Green councillor for Southville, branded the amendment one “of epically meaningless proportions that emasculates” the original motion.

“You take a motion which supports holding a ratification referendum on the terms of the deal, and you turn it into something which, if passed, results in writing a couple of letters and considering holding a meeting,” he said.

Putting his two-pence worth in, Mark Weston, leader of the Conservative group, dismissed the amendment and the original motion, arguing “you have just got to respect the result”.

Both the amendment and final motion were voted through.