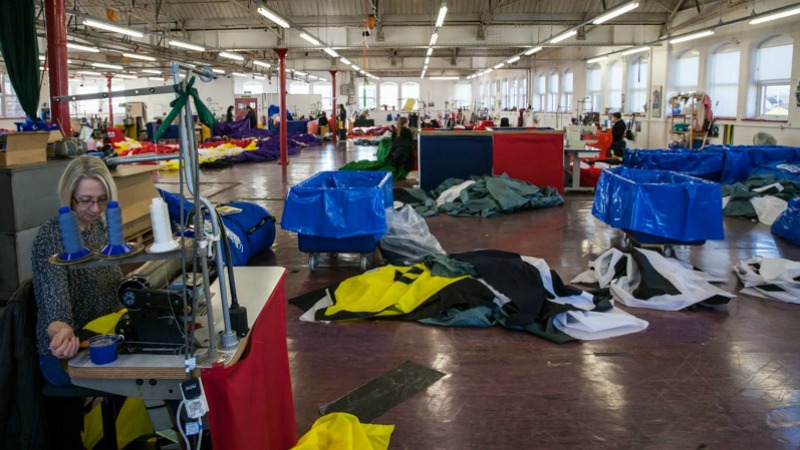 Photographer Darren Shepherd spent the day with Don Cameron, proud founder of Cameron Balloons in Bedminster, to talk through the process of making a hot air balloon.

Don Cameron founded Cameron Balloons in his basement flat in Cotham. Don is pictured here in one of the larger passenger-carrying baskets the Bristol factory is famous for which is due to go to out to Kenya later this year.

Donna is pictured here on the top floor of Cameron Balloons, where there are often thousands of kilometres of precisely-cut fabrics which are sewn expertly into hot-air balloons.

Donna sewing applique artwork onto the balloon – this one is off to France.

Rowena is already making great progress, after only recently joining the team. Although she is an experienced machinist, it takes time to learn the skills needed so it will be a few more months before she is ready to sew hot-air balloons alongside her colleagues.

Spring greens! Actually Cameron Balloons use hundreds and hundreds of different colours and types of fabrics depending on the customer wishes, the application that it will be used for and the longevity needed for the end product. Each item manufactured in the three storey red-brick building is totally tailor-made according to the customer’s request.

Megan gets all the pieces of the balloon in the correct order for sewing or as it is known at Cameron Balloons, “laying-up”.

Marilyn sewing about 3000 metres of fabric together which, will once finished, will be a stunning new passenger-carrying balloon for Turkey.

Jon with a sea of artwork. He has to get the artwork precisely put into place on the balloon. These letters are only about 60cm tall. Often artwork can be as large as five or 6 metres tall.

Jon is preparing artwork for the machinists to sew into place permanently on the hot-air balloon. This is definitely a job for someone who is very precise and highly skilled. There is rather a lot of careful measuring to be done to get it looking perfectly correct.

Ian precisely cutting symmetrical panels ready to been sewn up into hot-air balloons. Ian is responsible for every piece of fabric and artwork throughout the factory so at any one time could involve over 200 kilometres of different materials.

A photo taken of flying over the Alps in the1970s. Cameron Balloon’s Tom, now retired, is clearly visible in the photo. At least his feet are, as he was sitting perched on the load-ring of the gas balloon

Don with his daughter Hannah Cameron, one of the directors of the company