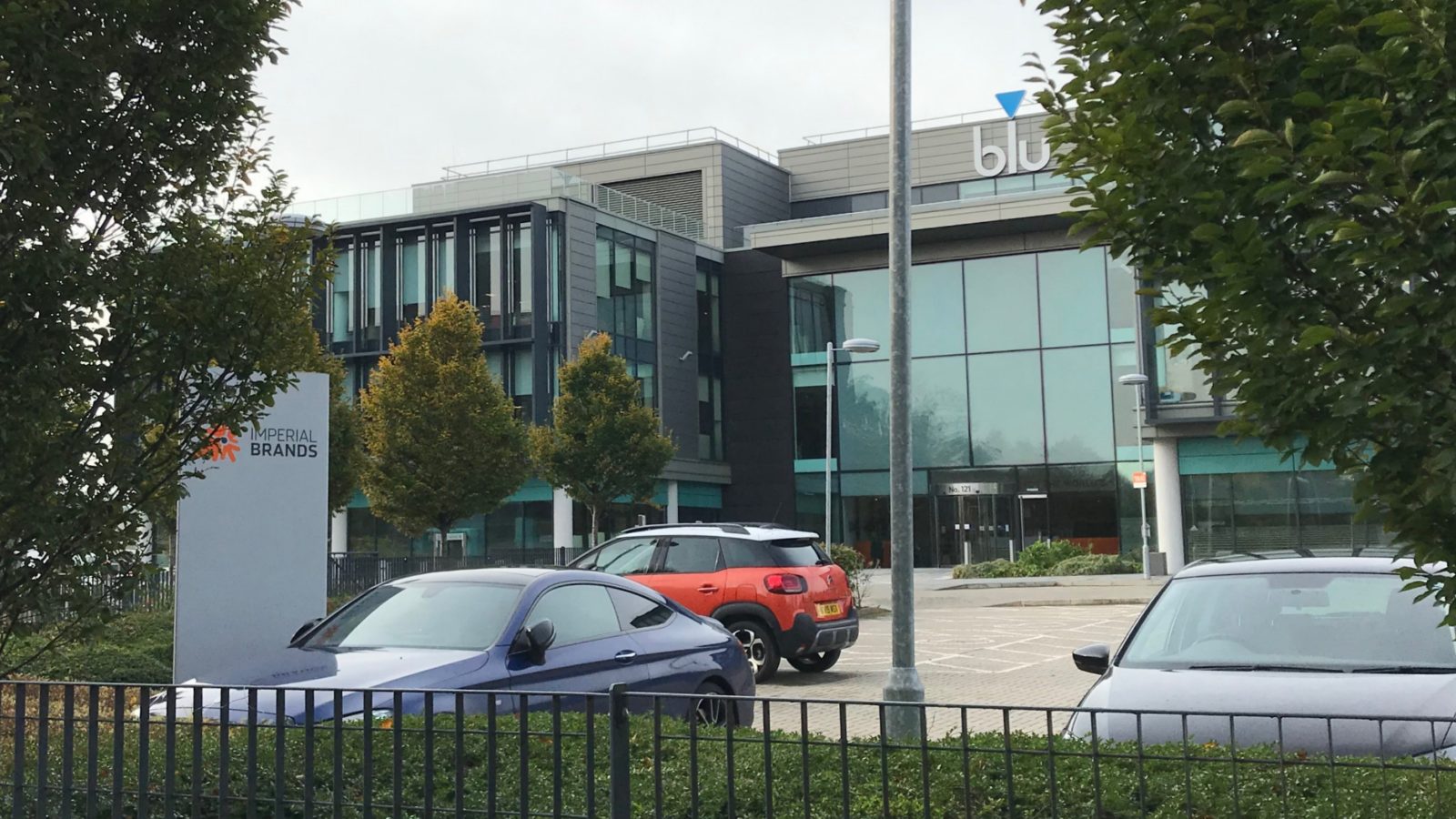 A building on Winterstoke Road has recently had a subtle makeover. Imperial Brands is now the name above the door of the building which when it was completed in 2013 was constructed as the new global headquarters of Imperial Tobacco.

Of course, tobacco is still a major part of what goes on at this FTSE100 company whose portfolio includes Golden Virginia, Lambert & Butler and Rizla. But the glowing logo for Blu overlooking Winterstoke Road is an indication that things are changing at one of Bristol’s most profitable businesses.

“We are Imperial Brands PLC, a dynamic fast moving consumer goods company borne out of a strong tobacco heritage,” says the spiel on Imperial’s website. “We have continually evolved to embrace changing market dynamics and develop new consumer experiences.”

Imperial employs more than 30,000 people across the world and like other tobacco companies is spending astronomical amounts of money in an attempt to keep themselves relevant in the 21st century, developing what are known as ‘next generation products’ (NGP) that aim to be significantly less harmful than combustible cigarettes.

NGP offer smokers alternatives that predominantly include vapour, heated tobacco and oral nicotine, with Imperial putting most of its efforts to develop and prioritise the former – of which Blu is one of its leading brands.

Thank you so much to @ImperialBrands who transformed Tramways' garden! 🌿🌻 Not only did Tramways benefit but so did Imperial! They said: "For us, it was about being able to give something back." 💛 If your team is interested in any of our Autumn tasks, call 0117 970 9319.🍂👩‍🎨 pic.twitter.com/3FGNCGZE7Q

While Imperial concentrates on vapour (with the UK and the USA the world’s two largest vapour markets), its rival Philip Morris – whose brands include Marlboro – has spent billions of pounds developing heated tobacco. If you have seen IQOS shops in Cabot Circus, The Mall at Cribbs Causeway and Queen’s Road on the Clifton Triangle, this is part of Philip Morris’ incursions into Bristol.

The shops look like a cross between an Apple store and a Nespresso shop, with IQOS using flavoured tobacco sticks to release flavour which can be purchased on a subscription basis. The technology in the device heats rather than burns the tobacco stick, releasing nicotine and tobacco flavour with on average 95 per cent less harmful chemicals compared to cigarettes, no smoke and less smell. 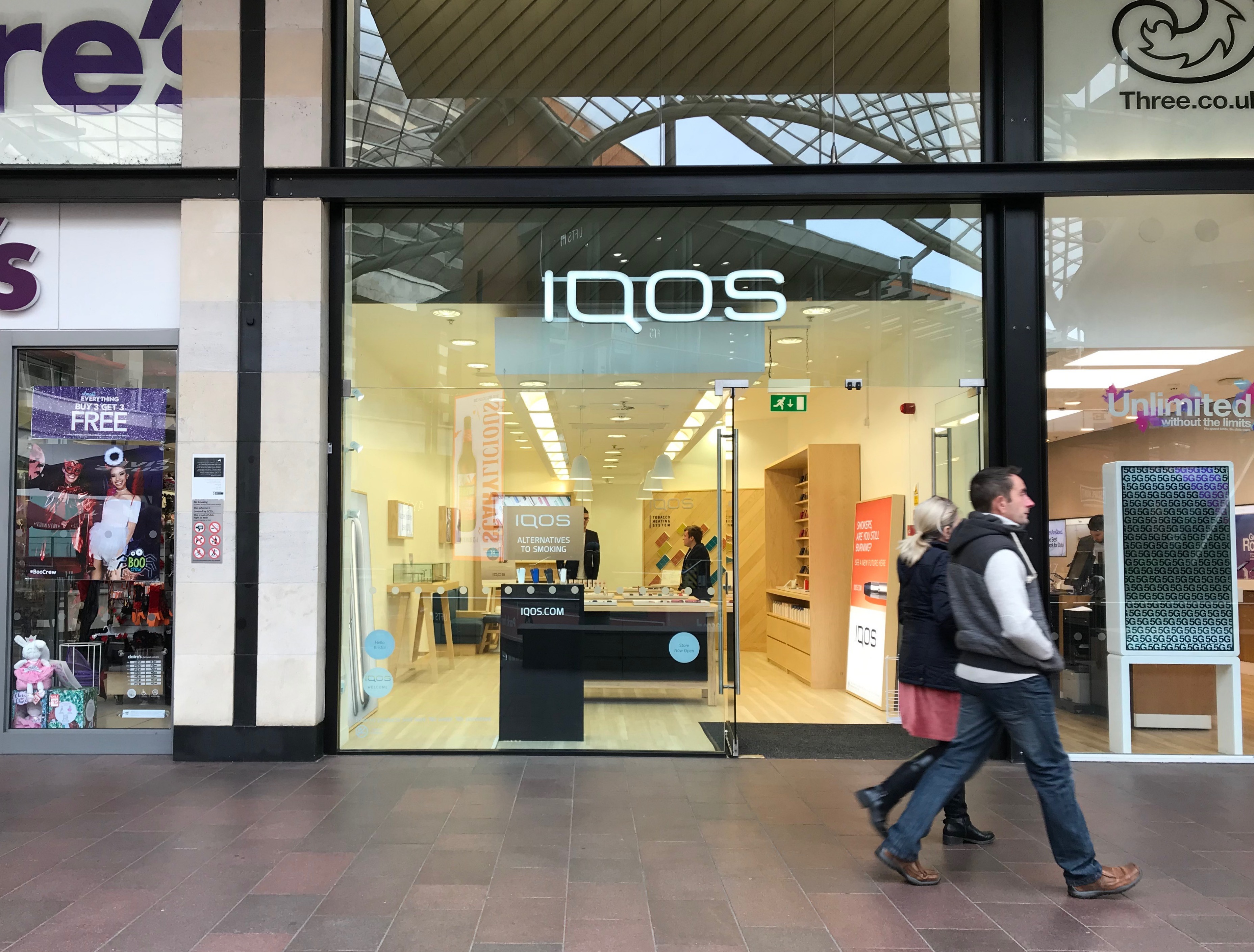 Peter Nixon, the managing director of Philip Morris – whose company slogan is “delivering a smoke-free future” – says that “there is no reason for anyone to smoke any more”.

Nixon, who was in Bristol to check in on his firm’s three IQOS shops, has worked for Philip Morris for 16 years and earlier this year appeared on Good Morning Britain where he stressed to Piers Morgan the need for educating smokers on the differences between smoking cigarettes and using heated tobacco products and why it is important to switch if they are unwilling or unable to quit.

“If people come into our shops, it’s a very pleasurable environment,” Nixon told Bristol24/7 during a coffee at Convoy Espresso in the Paintworks. “That’s not what people are used to when buying cigarettes, which is usually very transactional. We’re trying to make it much more of an educational experience about what the harms of smoking are.

“The reason why we’re growing in Bristol is because our users are very happy. We have the shops, we have our partners and because out users are happy, word of mouth is growing.”

• 19% of Bristol, North Somerset and South Glos (BNSSG) residents report themselves as smokers, 10 per day on average
• approximately a further third have smoked in the past and have now given up
• 3% of panellists currently use an e-cigarette/vape – this would equate to 30,000 users in the region
• A majority of BNSSG residents are against smoking cigarettes and e-cigarettes on NHS sites
• 24% of people reported smoking cigarettes containing tobacco, with this driven largely by inner city and east and south Bristol; it is considerably lower in north and west Bristol
• in Bristol, 58% of people defined themselves as a ‘social smoker’ and 38% of people defined themselves as an ‘occasional smoker when having a drink’

It was recently predicted by Frontier Economics that Bristol is to become the first city in the UK to go totally smoke-free – with research suggesting this could happen within the next six years. The city is tipped to become the first place in the country to stop smoking by the year 2024, ahead of York and Wokingham.

In February 2015, Millennium Square and Anchor Square became the first major public outdoor spaces in the UK to go smoke-free after a voluntary pilot was launched by Smokefree South West. Smokers’ group Forest criticised the scheme as an example of “creeping prohibition” but they need not have worried as despite the signs remaining, the smoking ban is not enforced.

Earlier this year, Bristol public relations firm JBP – who count the likes of the Colston Hall and Bristol Housing Festival as their clients – was behind the first national advertising campaign run on behalf of the whole UK vaping sector. The full-page adverts published in the i and Metro newspapers in October aimed to hit back at claims that vaping has caused the deaths of a number of people in the USA and what they see as continuing misinformation about vape products.

In Britain, e-cigarettes are seen as central to the fight against smoking. But many experts believe the evidence is contradictory, said an Observer special report said in September. Donald Trump has unveiled plans for a ban on flavoured e-cigarettes after six deaths of people who had used vape pens and e-cigarettes. At least a further 450 people have been hospitalised in the USA for lung diseases related to vaping.

The “Facts not Fiction” adverts coincided with JBP securing coverage on the BBC’s breakfast news programme and has been developed by the Bristol company to reassure vapers nationwide and to give confidence to smokers looking to quit their habits through vaping.

Paul House, commercial director at JBP, said: “There are 3.6m vapers in the UK who have successfully switched from smoking to vaping and another seven million smokers. Public Health England has repeatedly stated that vaping is 95 per cent less harmful than smoking and yet despite all this vaping is subjected to sensationalist, scaremongering and inaccurate claims.

“The campaign that we’ve devised on behalf of the UK Vaping Industry Association, is designed to put the record straight and just provide the facts. We want to show how vaping has changed the lives of millions of former smokers turned vapers and open up the industry so that consumers can see for themselves the high standards across the highly regulated UK sector.”

Smoking cigarettes increases the risk of developing more than 50 serious health conditions, including cancer and heart diseases, and is the single biggest preventable cause of death.

“Many people find e-cigarettes helpful for cutting out smoking. While they aren’t completely risk-free, they carry a small fraction of the risks compared to smoking traditional cigarettes.

“There are a number of support services, tools and medicines available to help people quit. Visit nhs.uk/smokefree to find out more.” 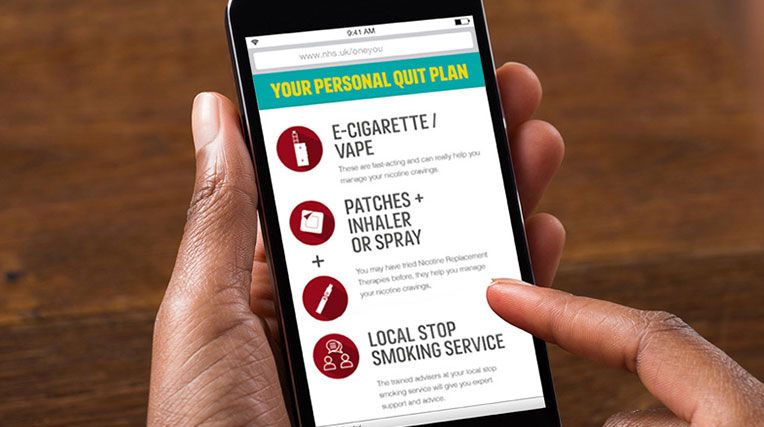 Quit smoking with a free Personal Quit Plan from the NHS

A new study published earlier month in Psychological Medicine and led by University of Bristol researchers has found that tobacco smoking may increase your risk of developing depression and schizophrenia.

The study adds to a growing body of work suggesting that smoking can have adverse effects on mental health.

Dr Robyn Wootton, senior research associate in the School of Experimental Psychology and the study’s lead author, said: “Individuals with mental illness are often overlooked in our efforts to reduce smoking prevalence, leading to health inequalities.

Our work shows that we should be making every effort to prevent smoking initiation and encourage smoking cessation because of the consequences to mental health as well as physical health.”

Read more: ‘There’s no reason why anyone should smoke anymore’