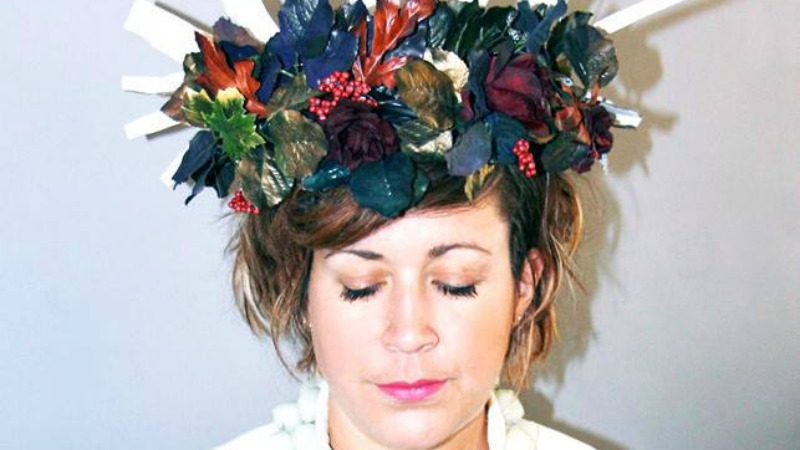 Novelist Julian Barnes’ somewhat wistful stock answer whenever he’s quizzed on his beliefs – “I don’t believe in God, but I miss him” – could be part of the programme notes for Amy Mason’s thoughtful show about the transient meaning of faith, or a lack of it.

Taking the Catholic Mass as her starting point, (lapsed) Amy presents her show (a Bristol Old Vic Ferment production) in the form of an immersive lecture, taking care to inject plenty of added colour, joy and fun into both perennially dry forms along the way.

There’s a printed Order of Service on each pew, and before we know it we’re singing along to Leonard Cohen’s Hallelujah which, as Amy reminds us, six million Britons voted as their favourite song. Amy loves stats, and when there’s a show of hands to see how many of us believe in God, she’s dead chuffed that the BOV audience perfectly reflects the national average: 63% of Brits are atheists, apparently.

So, Amy sets out to create a religious service and some new guidelines of faith (“We can do better than Scientology!”), especially for people who might not believe in belief, but who could be missing a bit of ritual. Amy thinks we’re all secret spiritual seekers who have sublimated our need to believe in an Omnipotent Higher Power by believing in easier, smaller things like Rescue Remedy, horoscopes, positive outcomes and homeopathy, through the use of magical thinking.

Amy’s version of the mass is a hoot: we get to say HOORAY instead of the usual boring amen, and instead of the standard Penitential Prayer (“it’s a bit heavy, so I’ve changed it!”) we just pray to be a bit nicer next week. This is Rome Lite! And instead of wafers and wine for the body and blood of Christ, we pass round cans of Carlsberg, plums and almonds, while listening to Otis Redding.

As well as being about faith, Mass is also about the populist tendency to transmogrify anything too big or chewy into a more palatable, easily consumable smoothie.