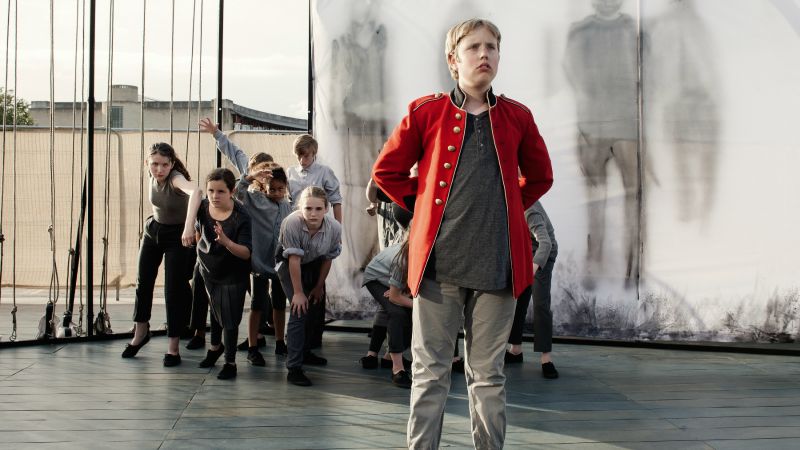 Way, way back in the mists of time (2012) I had a job writing copy for the Man in the centre of Bristol (don’t judge me, even writers have to eat sometimes). On my daily stroll to work I cut through Wapping Wharf car park: at the time, a scruffy collection of ruined buildings, dusty potholes and soggy plasterboard.

Like so much of the world around me, I was blissfully unaware of the history behind the site of my short cut, where Bristol New Gaol once stood – the grim granite gate looming out over Cumberland Road all that remains of the formally imposing prison and where prisoners were once hanged in front of large crowds.

Without so much as a by your leave my short cut was cut short, and like so much of Bristol’s formerly industrial harbour the site is now being developed into swanky new apartments. To mark the wharf’s passage into a more gentrified phase of life, Bristol Old Vic Young Company and Travelling Light have created an atmospheric, sometimes macabre but always engrossing piece of theatre looking back at the history of the wharf.

The performance focuses on three character-led stories associated with the site: Hanham teenager John Horwood, the first person to be hanged at the gaol for murder in 1821 and whose skin was then used to cover a book containing an account of the trial, now housed in neighbouring M Shed; Colonel Brereton, commanding officer during the 1831 Bristol Riots, court-martialled for failing to put down the rioters with enough force, played with military precision by Jack Wilfan; and the last person to be hanged at the prison, maid Sarah Harriet Thomas, executed for battering her cruel employer to death and here brought back to life with confidence by Lila Stewart.

There can be few better open-air venues than M Shed’s Exhibition Square, with its panoramic views of the harbour, its cranes and the nearby Matthew. A talented young cast ranging in age from 11 to 22 bring the stories to life with energy and focus, despite the persistent efforts of local gulls to get involved, while the action is confidently directed by Young Company Director Lisa Gregan.

The 45-minute production is a whistle-stop historical montage that leaves its audience with a tangible sense of the area’s history and encourages them to dig deeper into the city’s vibrant and often troubled past. At the very least, seeing it will force this writer to look around a little more on the walk to work.

A Thousand Seasons Past continues at the auditorium on Museum Square, outside M Shed until Saturday, August 8. Tickets are free but must be booked via the Bristol Old Vic box office on 0117 987 7877. For more info and to book tickets, visit www.bristololdvic.org.uk/thousandseasonspast.html