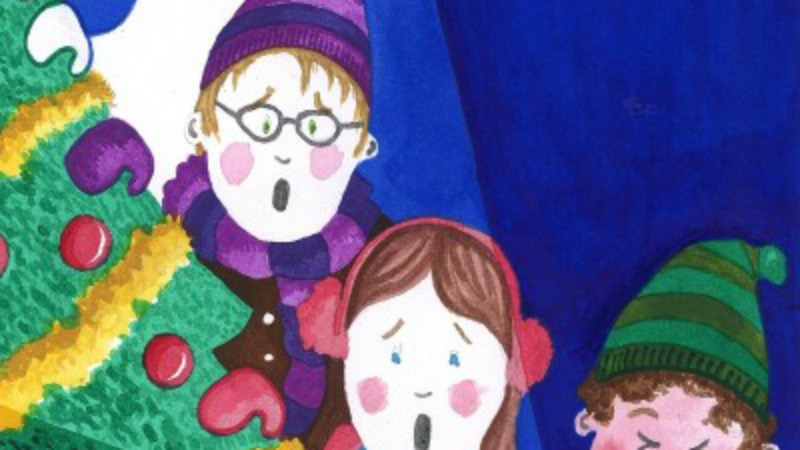 “The imagination is a powerful thing”. It’s a line quoted several times in this Lakeside Arts Centre production, and one which rings true as an energetic cast of three bring this accessible Dickens adaptation to life. Adapted by Toby Hulse, this modern re-telling of a festive staple noisily negotiates the familiar landmarks of the story, combining well-loved characters with friends we haven’t met yet.

The cantankerous Andrew is spending Christmas with his brother and sister at their Auntie Val’s cottage in order to escape the world. After a power cut scuppers Andrew’s plans of a quiet evening in front of the TV, his excitable siblings decide to liven things up with a ghost story – and Andrew is forced to reconsider his attitudes to Christmas, his family and his life.

After a relatively sedate start the action cranks up several notches with some fabulously creative set pieces, including the recreation of the entire Cratchit family using just a scarf, and a packet of Wotsits standing in for Scrooge’s old master Fezziwig. The cast also make full use of an elaborate set, complete with lights, baubles and tinsel for added festive charm.

With a running time of just over an hour the production is more stocking filler than full Christmas dinner, but it never outstays its welcome. Some sections of the lightning-fast dialogue may go over the heads of younger audience members, but the sheer physicality and exuberance of the cast keep the action moving and help to create a seasonal spectacle not to be missed.

A Christmas Carol continues at the Alma Tavern Theatre until Saturday, 3 January. For more info and to book tickets, visit http://almataverntheatre.co.uk/theatre/what-s-on