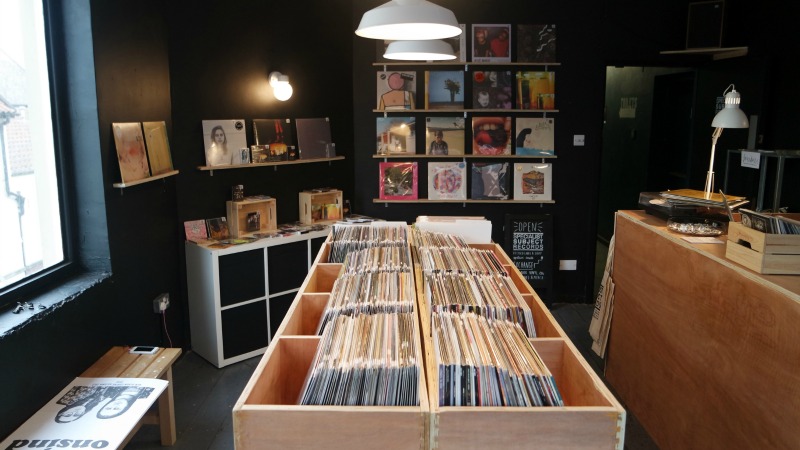 Specialist Subject Records are to open their first proper, open-to-the-public shop this weekend with something they’re partial to – a big punk party on Saturday, August 26. Flick your eyes over their roster and you’ll see why they had no problem in booking some of the brightest DIY talent around to play the day – Rory Mathews of The Fairweather Band and Some Sort of Threat will be joining Woahnows, Jeremy from Austeros and some secret special guests to celebrate the big day.

We caught up with Kay, one half of the label, to see what we can expect from Bristol’s newest record shop.

You’ve moved from Exeter to Bristol to open your first brick and mortar shop – why the move?
The label has never solely been based in one place – it started in Leeds, then Cornwall and Birmingham before we moved to Exeter five years ago, so we’re not strangers to moving loads of heavy boxes to try out something new! In April we moved out of an office we had in Exeter into a temporary space while we worked on our next move, then the guys at Exchange offered us some space we could run a shop out of and we just kind of went for it! 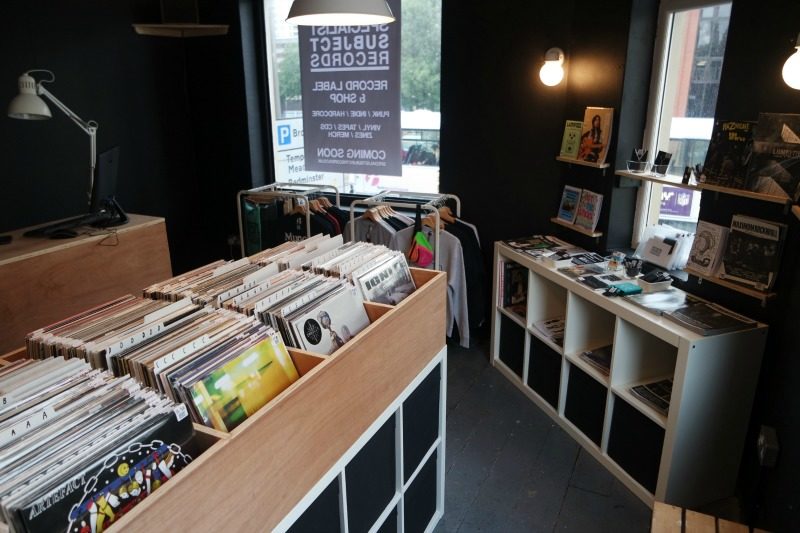 How long has this been in the works for? Has it always been a bit of a dream to own a record store?
Start to finish no more than six weeks! We’ve always toyed with the idea of opening a record shop, but really wanted to ensure it was a real extension of the label rather than something standalone. We have always done all our online mail order and the distro side has grown pretty organically over the years from a couple of boxes of releases traded with other labels and bands while on tour, to getting in new releases from punk labels we love – so the shop is basically a way to carry on doing what we’ve been doing but with a physical space, in person!

The shop will be perched above the Exchange. Do you have a good relationship with the guys there?
We’ve been coming up from Exeter for gigs at Exchange loads over the last few years, both our bands have played here and we were already really familiar with the space we’re now running the shop from, so it didn’t take too long to convince ourselves it would work really well. The guys that run Exchange are really positive and pro-active in what they’re doing – over the last year they’ve transformed the front bar into a coffee shop that’s open during the daytime, and there’s also a recording studio in the basement, and the shop’s part of their vision to make the Exchange a place that’s more than just a bar / venue. 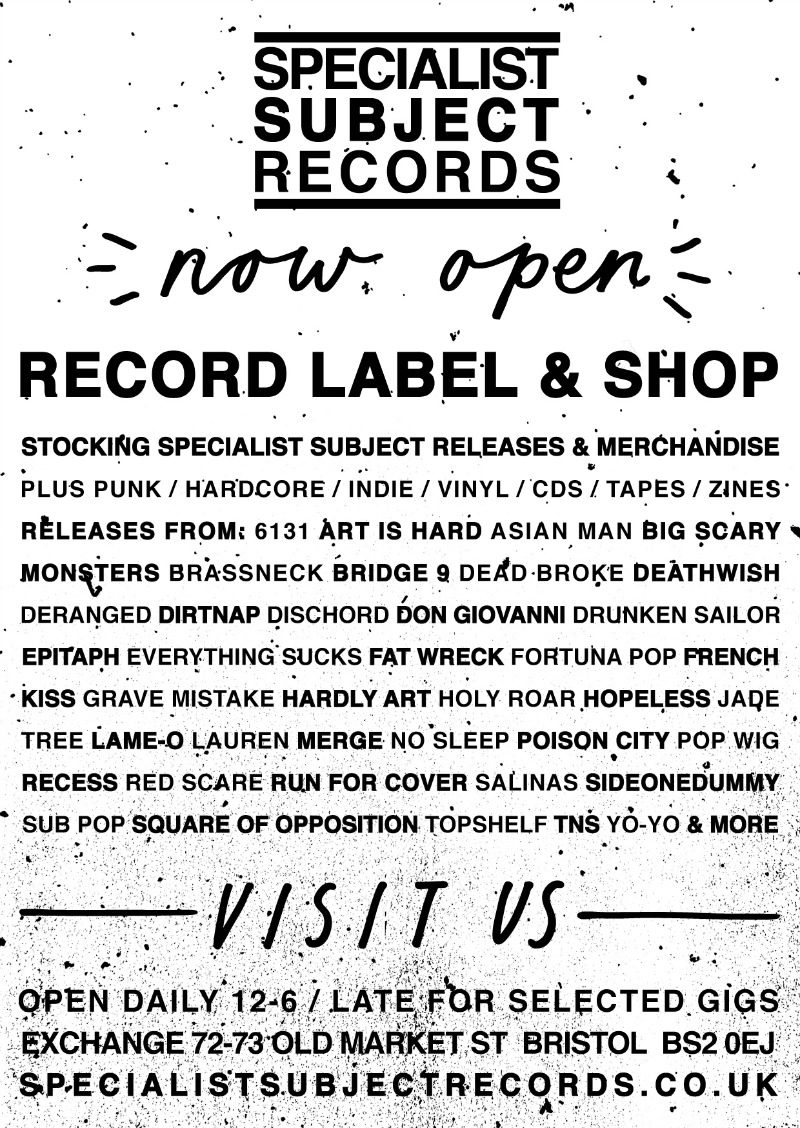 What kind of music can we expect to be stocked? Is it just stuff from Specialist Subject, or other labels’ output too?
We’ve got loads of our own stuff spanning a back catalogue of over 60 releases now. We’ve also go loads of vinyl, CDs and cassettes from labels like Run For Cover, Dischord, Deathwish, SideOneDummy and Sub Pop. It’s definitely ‘contemporary punk’- we’re more likely to have Pinegrove or Downtown Boys than Sex Pistols or The Damned. We’re slowly expanding and hopefully will stock plenty of stuff that other shops in Bristol don’t.

Apart from music, will there be anything else to buy?
Yep! For those who aren’t the biggest fans of crate-digging, we’ve made sure we have plenty for people to browse who don’t have a turntable. Our zine collection is slowly growing, we stock Razorcake and MAXIMUM ROCKNROLL, as well as She Shreds – a magazine by and for women guitarists and bassists. We also have T-shirts, pin badges and other bits and bobs. 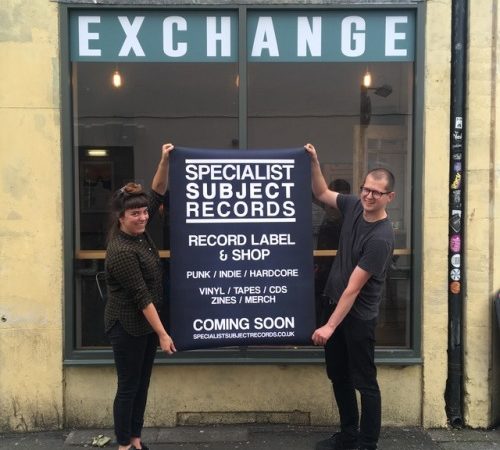 Is there anything you have in stock you’d personally really recommend right now?
Currently I can’t stop listening to the new Diet Cig record – Swear I’m Good At This. Andrew has been listening to Lost Balloons – Hey Summer every day since it came out. We also both can’t get enough of the new Downtown Boys album – Cost Of Living.

You’ve got a couple of awesome acts playing your opening party – are live events going to be a regular thing?
We hope so! We’ve plenty of plans for events in the shop, in Bristol and further afield. We’ve got a Christmas Party booked for Saturday, December 16 at Exchange – so save the date for that one. We’ve also plans for record listening parties and a record fair.

After the party, what are the next things you guys have planned for the shop?
We’re hoping to continually improve the shop over the next few months, stocking as many new records as we can and opening late for as many gigs at the Exchange as we can. With the label we have the new album from Jesus and his Judgemental Father coming out on Friday, September 1 – so it’ll be great to celebrate that being our first release to come out in the shop! We’ve then got new albums from Hard Girls and Onsind coming up before the year is out – so plenty to keep us busy.

Specialist Subject’s opening party kicks off from 12pm till late on Saturday, August 26 at First Floor, Exchange, 72-73 Old Market Street. It’s free entry, and the first 100 people through the doors get a free tote bag. Find out more details at www.facebook.com/events/126254951328836/