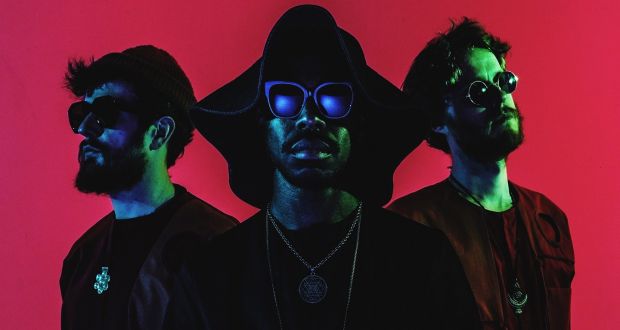 Walking through the ticket barriers at Bath Spa Train Station a gent in a loud patterned shirt and trilby hat overheard my conversation I was having with a friend about the band I was to see tonight. He chimed in at my description of “intense jazz” and replied “are you seeing The Comet Is Coming Too? I’ll see you there.” The night was to be an odyssey of pure unadulterated jazz, teetering on the spiritual side at times. The Komedia is a grand venue I’ll say that, it has such a presence and it felt incredibly fitting to see such an intense band – intense in the best way possible.

Opening the night was Leafcutter John, I couldn’t make heads nor tails over what he was doing initially. Clutching bike lights and flailing his arms around like one of those inflatable car dealership men, Leafcutter John had provided a livestream of these actions which were then projected behind him. After scratching my head and a few minutes of intense staring at his actions, I realised he was using a wooden plate which had light sensitive dots installed. This then sent data to his laptop, the dots had been linked to various parameters that change and warp the sound.

He was physically and theatrically wrapping the sound live, it was a viceral form of performance art. I could feel the different channels being manipulated and jumping from left to right. At times it was as if I was listening to a song in mono with a set of cheap headphones. Musically it verged on trance with drum and bass aspects, this is something I could definitely see being performed at 3am in Blue Mountain.

The audience was filled with older couples in their wackiest Glasto gear along with a few young jazz heads itching to get their fix. Marching on stage to a boisterous applause the trio took their respective places on stage, Danalogue on keys was donned in a Kappa tracksuit whilst Shabacka opted for a tank top, suspenders and a bucket hat. Drummer Betamax chose a tribal top and loose fitting trousers, comfort was his priority as he would be thrashing his kit for the best part of an hour and a half.

For the first few minutes I quite literally couldn’t see a single thing due to the obscene light show going on, I was in the first 3 rows and got a pretty good spot. The lights for the majority of the show were atmospheric and added elevation to the set however it teetered on overkill and blinding at times.

Shabacka is undeniably the best sax player in the country, his raw tenacity and sheer power is a marvel within itself. I only ever saw him take a sip of water once which was about an hour into their set. Intense and brooding drums which were in ridiculous time signatures, the chord progressions from Danalogue were riddled in synth effects which added a real EDM vibe to the mix. Unfortunately there was a minor mic issue with Shabacka’s sax, whilst I could hear the high notes quite well as I was in the first few rows, it wasn’t translating well through the soundsystem and the higher notes were lost at times.

It was all encompassing and hypnotic, Danalogue was the hype man and gesturing to the crowd as though he was a DJ in Ibiza. Whilst remaining technically challenging the sax riffs were inherently catchy and bodies were letting the music take over. Similarly to when I saw Ezra Collective, spiritualism is big within the sphere of The Comet Is Coming, the ability to fully let go and allow the music to transport you into the stratosphere is something quite special.

Nothing was said during their time on stage, Danalogue briefly introduced the band, we all demanded an encore to which they did deliver. Ending the night with “thank you for coming out, this is a beautiful thing”, The Comet Is Coming rocked up and delivered filthy jazz and we all went home feeling stunned and achy from all the dancing.