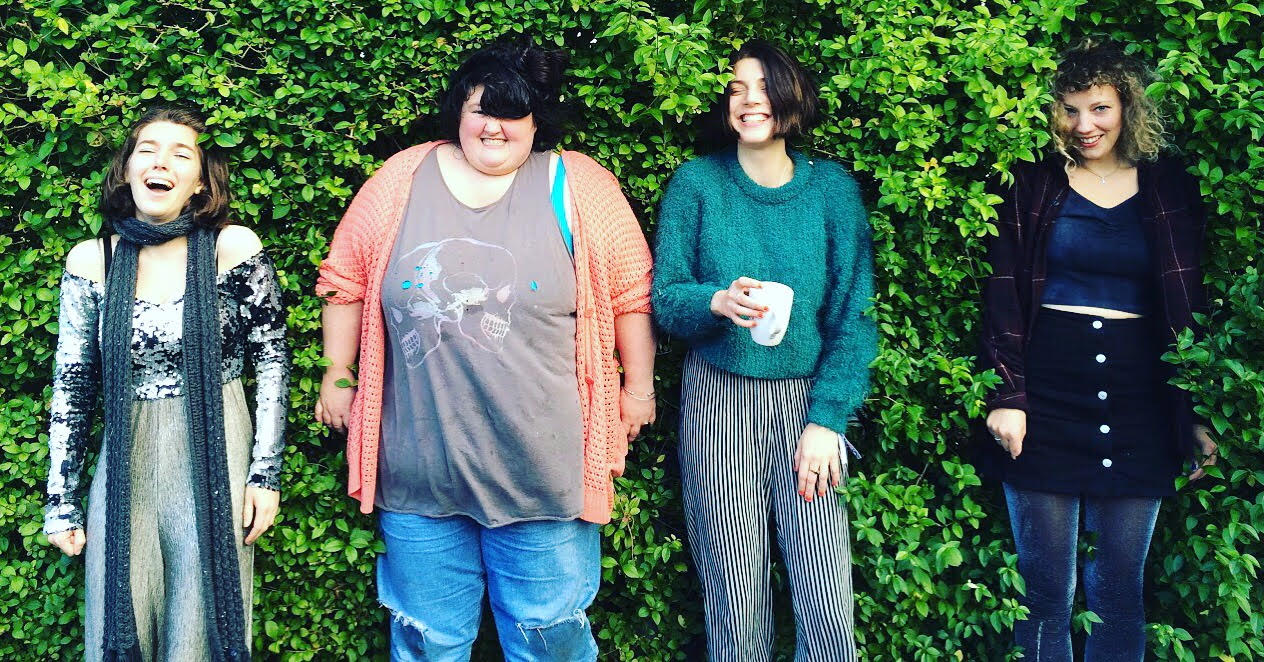 Rough Trade Bristol was where the party was at on Friday night, a three-hour blitz of performance art and buoyant punk ushering the arrival of Bristol post-spunk quartet Slagheap’s debut LP.

A number 36 raffle ticket was handed to me as I curiously made my way to the stage to see Hannah & Olivia, the first act billed on the bumper party list.

A dadaist duo of sorts with tongue firmly in cheek, tales of purple oceans and the existential predicament of one’s head being trapped in another even larger head was told with the aid of painted moustaches, purple papier-mâché masks and a cheap keyboard pre-set version of Hey Jude. Their absurdist charade triggered waves of contagious laughter once the crowd needed a moment or two to understand their world they invited us in to.

Next up was psych-pop outfit Clunk, an impressively dexterous band distilling all the best bits from 70’s power pop and glam with a little lick of garage rock. Fire fuelled the confident lead singer who looked like Riff Raff from Rocky Horror Picture Show but sounded like Tom Verlaine. Their lead guitarist displayed some of the most jaw-dropping playing I’ve ever seen, and the lightning speed with which he swapped guitars (including unzipping out of the case!) has to be seen!

After a brief raffle announcement to win tote bags and various merch (35 and 37 were called, can you believe it!?), heavy surf-indie trio Grandma’s House all donned in boiler suits pummelled the crowd with a blistering set of punk rock empowerment and defiance.

With our collective appetites well and truly wet, Slagheap finally stormed the stage and tore through a joyous and vibrant stew of ESG style grooves and Gang of Four avant-funk, all held together with a bristling air of spontaneity.

The politics of disproportionate male space occupation, the many pleasurable uses one can have with a power shower, and tripping on acid at a sex party (we’ve all been there) all delivered with irreverent glee and razor-sharp humour with a finger firmly on the contemporary pulse of gender and sexual politics.

I left Rough Trade with a giddy sense of a colourful, and perhaps contrary, new addition to the current Bristol music scene: vivacious, unpretentious, urgent, and most importantly, fun.