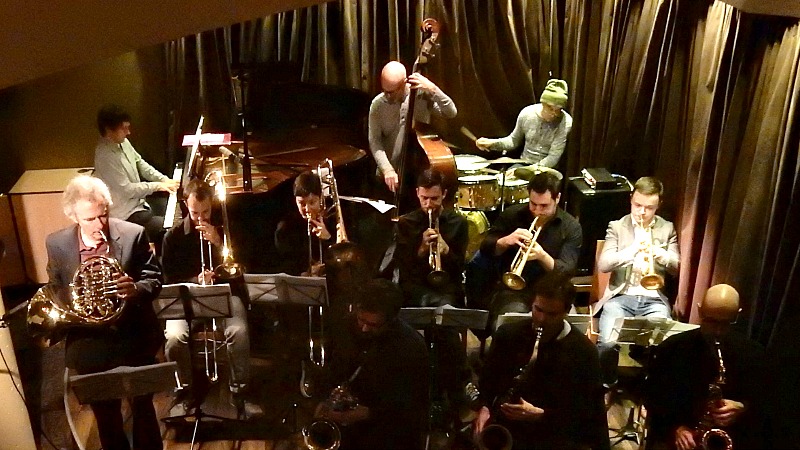 For a man with an imposing classical background, bandleader Jim Rattigan brought an amiable South London warmth along with some interestingly varied compositions for his 12-strong brass-led ensemble. Pavillon is certainly one of the biggest outfits to have fitted onto the Future Inn stage, snuggled quite closely against the cold fog-bound evening outside, and their acoustic wind power could have overwhelmed the room had they not been such a well-disciplined band.

It was a pretty stellar line-up, too, including many other experienced bandleaders and composers who gave Rattigan’s tunes as good an outing as he could have wished for. The pieces used their skills as soloists to great effect, as when Tom Green’s magisterial trombone made Leaded Light soar, or impressive young trumpeter Sean Gibbs (picked out by the Inn’s eccentric lighting system) led an effervescent hard-bopping trumpet trio through the middle of Shuzzed.

With players of this calibre you can rely on entertaining solo play but a big band set demands something else, something that only such a range of instrument voices can provide, and Rattigan has a good contemporary ear for tone and structure. Parkwood Fair moved from a Mingus-like solo bass intro from Dave Whitford into a free joust with Hans Koller’s mischievous piano from which a snapping drum groove brought the horns into play – all this before we actually heard the tune. As it progressed the piece gained a jaunty swing beat, with Rattigan’s eloquent solo punctured by choreographed stabs and squirts of brass chordage that finally erupted into a mass blowout. It was great ensemble music with a whimsical heart that recalled Carla Bley.

Given the shifting moods and elements a lot depended on the drummer and the distinctively behatted Gene Calderazzo led things excellently from behind, building momentum or reining things in as required while still catching the rhythmic inflections of the soloists, as when James Allsopp’s beefy tenor sax drove hard into Twenty-four Seven. Behind Allsopp’s authoritative solo an interesting dialectic was unfolding between Calderazzo’s precision and Koller’s contrarian stabbings at the piano, yet the three parts seemed perfectly in accord the whole time and set the scene for another fine ensemble ending.

It was interesting, however, to realise how an unfamiliar instrument can always catch your attention and James Rattigan’s French horn was distinctive throughout. Hovering somewhere between a trombone and a flugelhorn it had a clarity of tone that allowed it to rise from the collective brass sound without any apparent effort. This ensured that the composer’s voice would always have the last word and rightly so – for all the talent on display (and I haven’t yet mentioned Percy Pursglove’s fiery flugelhorn on Dulwich Park or Martin Speake’s suavely bopping alto on Strong Tea) it was the band’s whole sound that really stood out. Big thanks to the Arts Council, therefore, for funding this intelligent contemporary project and enlivening a chilly winter’s evening so splendidly.