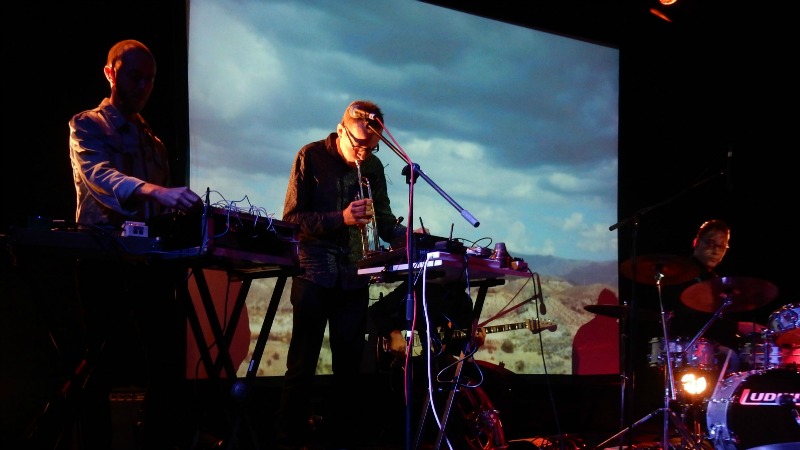 It’s typical of the quiet understatement of their music that this low-key event was actually the launch of Eyebrow’s fourth album. Like its three predecessors Garden City showcases the duo of Pete Judge (trumpet/electronics) and Paul Wigens (drums/percussion) but the new music had a slightly darker edge. Things started greyly, with a quiet trumpet introduction played out against Kathy Hinds’ dizzyingly excellent visuals of Shanghai’s abseiling window cleaners. The austerity of the sound was well matched by the black and white crispness of the images, with Judge’s trumpet finally emerging from a dense layering of loops over a no-nonsense drum beat. Confidential Agent was similarly complex and appropriately deceptive, its woven cross-rhythms captured in a subtly modulated film collage of people walking in groups. The first half ended with Mr Choppy, tipped as the single to come from the album, an absorbing 7-time meditation with a plangent trumpet coda that barely suggested the axe that apparently inspired it.

After the break things took a darker course, with Jim Barr’s baritone guitar and Tim Allen’s electronica joining the band onstage for the menacing Blind Summit, Wigens’ smart and economical drumming nevertheless providing an element of unsettling unpredictability in the big soundscape. The almost clinical tone and compelling delivery suggested Berlin, somehow, or maybe Dusseldorf’s Kling Klang robotics, a sense that also applied to the rustling electronic murmuration and more dance-friendly drumming of the epic Thaw. Scrim came across as downright threatening, a bleak picture simmering with doom, fat trumpet sounds enriched to gravel growls. There was a kind of alchemy at work that enabled this seemingly restricted palette to keep refreshing itself, producing variations – albeit subtle ones – that told such different wordless stories. Pinch Point was particularly lovely, a jaunty Miles Davis trumpet surfing the upbeat drums to a distant choir of loopiness that was dangerously relaxing for a Sunday night in a darkened theatre. It all sounded like jazz but was probably much more contained than that would imply, a composed soundworld that used the same language but was saying something new with it. Garden City would seem to be a perfect document of Eyebrow’s musical maturation into something quite unique.