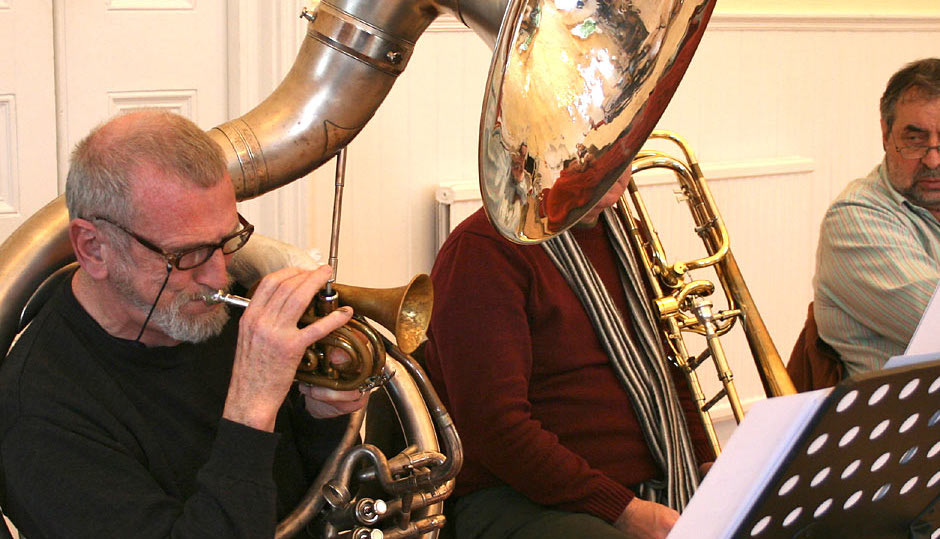 With another seven bustling days on the jazz front it’s good to recognise the independent venues that create such a thriving scene. Yes, it’s Independent Venues Week and, as pretty much all Bristol’s jazz activity takes place in independent places – from the tiny El Rincon to the more capacious Trinity or Fiddlers – we rightly salute the enormous contribution they make to our quality of life all year round.

The small-but-perfectly formed Be-Bop Club is, of course, one of the city’s most respected jazz institutions and this week welcomes Dave Holdsworth’s New Brew (Friday 31). After a stint in the near-legendary Spirit Level in the 80s, Dave has had a long association with Mike Westbrook’s various bands as trumpeter and sousaphone player. This lively brass-driven quintet also includes the impressive alto sax of Roz Harding, a stand out performer at this year’s (independent!) Bath Jazz Weekend.

Fringe Jazz is another fine independent Bristol stalwart that has fostered a number of great new local jazz projects, one of which is The Music of Pat Metheny (Wednesday 29). This excellent tribute, put together by guitarist Matt Hancock and bass player Will Harris, makes its annual reappearance and is sure to be an early sell-out. The band’s very accomplished pianist David Newton brings his David Newton Trio to Jazz at Future Inn (Thursday 30) to showcase his own lyrical compositions. And it’s good to see contemporary pianist and composer Mike Collins appearing at El Rincon (Thursday 30) with bass player Ashley John Long and a set of his distinctively European-flavoured tunes. Herondrone (Canteen, Wednesday 29) is a new improvisatory project from the Astral Tusk collective steered by Snazzback drummer Chris Langton.

One of Bristol’s newer small venues hosts hot clarinetist Adrian Cox (Jam Jar, Thursday 30), touring with his regular quartet to promote a new album, the somewhat optimistically titled Now Is Spring. A vigorous player with a strong sense of the legacy of jazz clarinet this long-established band bursts with swing energy. A similar claim can be made for Swing & Bass (Attic, Saturday 1), the intriguing new DJ fusion of drum’n’bass grooves with ‘swing, funk and brass’. For a more traditional swing sound, however, the violin-led Al Fresco Trio (Tobacco Factory, Sunday 2) is an acoustic offshoot of the mighty Sheelanagig while the Kitchen Syncopators (No 1 Harbourside, Saturday 1) play swing arrangements of pre-war American music and songs.

Last year may have been her centenary but the celebrations of Marlene Dietrich continue at St George’s with Ute Lemper (Thursday 30) performing her Rendezvous With Marlene cabaret. Long acknowledged for her definitive interpretations of Marlene’s work, Ute’s show spans the singers’ career from the 20s onwards to her death in 1984.

But what of the big grooves? This week has a whole bunch of dance-friendly jazz, starting with high-energy guitar trio Hegemono (The Bell, Wednesday 29). Then Friday night has hard choices: uber-tight funksters Mulvey’s Medicine are at LeftBank, psych-funk outfit Wasabi come to Jam Jar while the James Dorman Bossa Soul Collective show up at No 1 Harbourside. Possibly the biggest groove fest will be the visit of Franz Von to Canteen on the same night, however. The relentless vocalist from K.O.G. & The Zongo Brigade makes an excellent fusion of Hip-Hop, jazz and Afrobeat funk with his classy jazz-based band.

If a sizzling new take on Balkan music from Chile seems unlikely to you then catching Insultanes first venture into Europe at Canteen (Saturday 1) should convince you otherwise. Debut album Sonido Volcanico does just what it says on the can.

And finally – two chances to explore the inspirational relationship between music and visual art, with Ishmael Ensemble vocalist Hollyseus Fly joining Waldo’s Gift for Synaesthesia (Gallimaufry, Wednesday 29). Holly will express her response to the band’s improvised music through painting. You can do your own thing, visually, at the Marma Session (Cafe Kino, Sunday 2), when the band Marma are joined by ‘real life fairy’ dancer Thalia Swann. Paper, pens and paints will be provided.