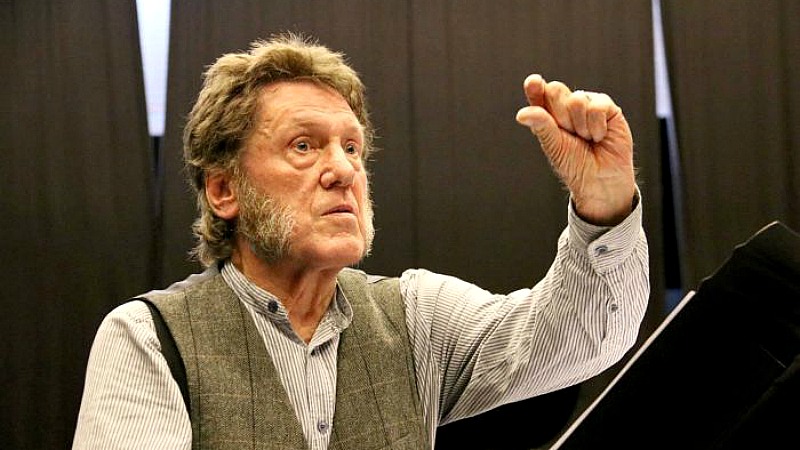 A distinctive figure at the piano with mutton chop sideboards, collar-less shirt and waistcoat his free thinking musical imagination and intense performing energy put him at the forefront of British and European jazz from the late 60s to the present day.

The son of the local policeman, Keith was born in Southmead, Bristol and discovered jazz as a musical teenager at Greenbank School. Having begun to learn his trade from the veteran players around the mid-60s Bristol jazz clubs – including the famous Dugout – he moved to London where he very quickly established a reputation as an up and coming young talent.

He formed The Keith Tippett Group, a sextet of similar fresh faces, in 1968, who released their debut album You Are Here, I Am There in 1970.

In the interim, Keith recorded with seminal prog rockers King Crimson and appeared with them on Top of the Pops.

He also met and married the singer Julie Driscoll, with whom (as Julie Tippetts) he would have two children and an ongoing string of musical collaborations.

In 1970 he conceived the spectacular Centipede project, a 50-strong ensemble comprising almost all the best young players on the London jazz, rock and classical scene, for which he wrote the 80-minute jazz-rock suite Septober Energy.

It was an outrageous mix of composition and improvisation that polarised critics and audiences at its rare performances, including one at the Anson Rooms in Bristol.

Amazingly, a major record label – RCA – actually took the project on, providing a specially chartered air liner to take the musicians and their gear around Europe to promote the resulting double album. However, Keith wound the project up after four years to enable him to continue with his smaller group music.

The 80s were a leaner time for jazz musicians and Keith began to develop the solo improvisation that would become one of his most noted genres, including experimentation with objects placed on the piano strings for sonic effect.

Though he was aware of the free jazz scene in London, he was always clear that, for him, improvised music was not the often abrasive and unstructured noise that free jazz produced. Rather, he wanted to use his imagination to spontaneously create engaging music in response to his and the audiences mood in the moment.

His disciplined approach to preparation for these performances often resulted in spine-tingling atmospheres as well as virtuoso displays of music that encompassed jazz, classical and other forms.

The Tippett family moved back nearer his birthplace to a cottage in the countryside near Thornbury and Keith began to get commissions to compose string quartets, choral music and other works, as well as recording his solo work (under the name Mujician) and collaborations with Julie and other players.

Saxophonist Paul Dunmall brought together an improvising quartet, including Keith on piano and also using the name Mujician, and they continued to work together for 25 years. The band Mujician were a regular feature at Keith’s occasional Rare Music Club nights in Bristol, appearing alongside folk and classical music acts.

After the millennium, Keith continued to perform and record with a wide variety of projects across Europe, using other Bristol-based musicians for his Keith Tippett Octet on compositions such as From Granit to Wind and the Celtic-influenced The Nine Dances of Patrick O’Gonogon.

However, from 2018 a series of health problems sadly began to prevent him performing. He is survived by Julie, their two children and grandchildren.