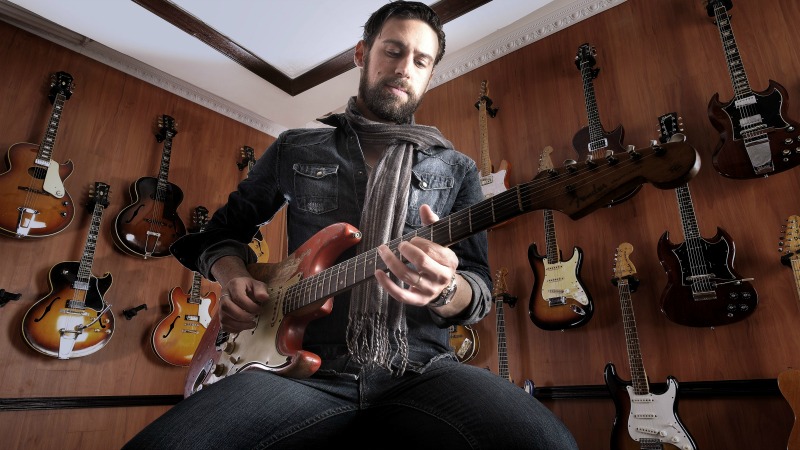 Dan Patlansky may not be familiar to you, but in his native South Africa he’s a well known and much respected blues guitar slinger – having opened for Bruce Springsteen at FNB Stadium in Johannesburg in front of 64,000 people. Dan is over in the UK promoting his new album Dear Silence Thieves with a date at the Thunderbolt on Wednesday May 6 – tickets available from Bristol Ticket Shop. Don’t miss the chance to see him in a small venue – next time he’s at the Colston Hall supporting Joe Satriani on his autumn tour. Meanwhile, he took the time to answer a few questions for us:

B24/7 Quick fire round to get you in the mood – pick one of each of the following and explain why you made the choice:

Electric, Just because it feels more natural and it’s what I like playing ninety percent of the time.

Live or the studio?

LIVE. Because you get the full energy from the audience, which helps you play.

Massive sunny Festivals, because it’s nice fresh air to breathe and large festival going audiences who give off a lot more energy.

Now you’re warmed up, some queries to get you thinking: What are you looking forward to most about returning to Europe for live dates?

I’m looking forward to continue building a fan base and exposing my music to brand new audiences, which is always exciting.

What are you looking forward to least?

The long haul flights are never my favourite thing when travelling. Confined space and not being able to sleep for that long always kills me.

And what will you miss most about home?

I will miss my family (Wife and 9 month old daughter). It’s always tough being away from them this long.

How different are gigs back home to European dates?

Quite different at this point: I am fortunate enough to play 500 – 1000 capacity venues in South Africa. So it’s been a while since I have played small club shows, but it feels great being in more intimate venues again.

There’s no denying your blues/soul influences but given your autumn support slot with Joe Satriani, what’s your view on the techno-shredding school of guitar playing?

Even though I’ve never been a huge shredder myself, I have massive respect for the art form. I listened to a lot of Joe Satriani growing up and it is a huge honour to be on tour with him.

Blokes of a certain age (and it’s nearly always blokes) spend ages fretting about the merits of vinyl, CD or digital – does it really matter?

I definitely think so. In my view vinyl wins 100 percent of time. Vinyl just seems to bring out tones in a record that CD and digital seem to lose.

You supported the Boss at a major SA stadium gig. Would you like that level of success?

Of course that level of success is very appealing, but saying that I don’t know if blues/rock would ever be a stadium filling genre of music. Maybe I’m wrong.

Speaking of Bruce, he’s spent most of his career engaged in politics both directly and indirectly through his music. What’s your take on politics in music?

I respect other artists who add politics in their music but I have never really written politically motivated songs. Living in South Africa you are surrounded by politics, so one gets quite sick of hearing and talking about it.

New recording Dear Silence Thieves is fresh out of the studio and in the public domain, how do you feel about it now it’s been set free (or do you need to put some time between the recording and the end product)?

We have actually released this album in South Africa and spent the last year touring with the album here, so it’s obviously not as fresh to us as it is for the UK audiences, but performing the tracks to first time listeners always refreshes the songs for me.

Let’s say a promoter offers you a one day festival to promote fellow musicians from back home, who would you bring over and why?

What currently makes you most proud to be a citizen of South Africa?

What’s the most common misconception about SA?

That Lions roam freely in our backyards and malls.

And what currently makes you least proud of your country?