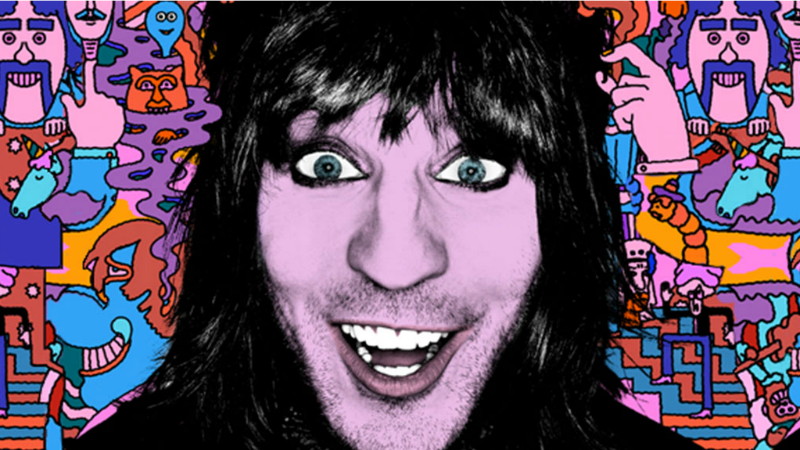 Noel Fielding’s choice to enter the Colston Hall stage to a Rolling Stones track seemed apt. From first minute to last the comedy hurtled along, never seeming to be quite in control of itself but carried along by Fielding’s creative energy and self-confessed easy charm, making the show as a whole more than the sum of its component parts.

An Evening with Noel Fielding began with its host engaging in some traditional stand-up, but quickly moved into sketch comedy, animation and full-blown pantomime, all presented with Fielding’s anarchic mix of wit and surrealism.

There were appearances from plenty of Fielding favourites including The Moon, Fantasy Man and Sergeant Raymond Boombox, while some new faces were also added to the mix in the form of Antonio Banderas, Hawkeye (played by Fielding’s brother Michael) and The Moon’s disreputable dark side.

A large part of the attraction of a Noel Fielding tour is his audience of dedicated followers, with many choosing to attend the show as their favourite Fielding creations.

Their familiarity with the characters on show and good will towards their unconventional leading man helped carry things along, particularly during an audience participation section that was strung out just a little too far.

It could be argued that prior knowledge of Fielding’s back catalogue is essential before attending the show. Those present on the basis of his more moderate Buzzcocks persona or expecting two hours of understated observational comedy will have left baffled by proceedings.

However, this certainly wasn’t the experience for the majority, and for the fans it seemed to hit all the right notes.

Fielding left the stage to a rapturous ovation from a full house of die-hard Fielding-istas and the rolling stone that is his comedy career rushes on at pace.