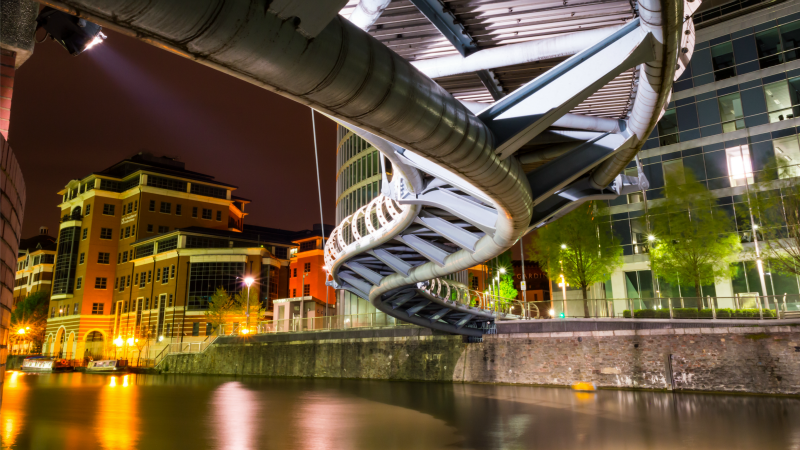 There are a few clues at the Engine Shed, the original entrance to Temple Meads, that this is a place for modern, forward-thinking, successful young businesses.

There are the functional orange pendant lights dropping down from the exposed ceilings, there are the brushed steel doors, there are the scaffold bars propping up tables in the booths where casual meetings are held, there are the primary colours and there’s the odd of bit of artificial grass.

The shared working space of the Engine Shed. Picture by Darren Shepherd

You could be at a national headquarters of Google. Or any other of those high tech business in Silicon Valley looking across San Francisco Bay.

But you’re not. You’re in one of the oldest train terminuses of its kind, designed and built by Isambard Kingdom Brunel in 1841, and given a facelift in 2013 to house some of the most exciting and fastest-growing start-ups which have been helping to power Bristol’s exceptional economic performance towards becoming the fastest growing city in the UK outside of London.

One of the popular booths at the Engine Shed. Picture by Darren Shepherd

It is a growth, fuelled largely by homegrown high-tech industry, that has gained Bristol and the surrounding area a name to match its San Francisco counterparts: Silicon Gorge.

“I’ve heard it somewhere called the San Francisco of the UK,” a management consultant tells me after putting down the phone as he beavers away on his laptop from the buzzing foyer. “I’m not so sure about that, but it’s an interesting analogy,” he concedes.

Since 2009 – the lowest point of the recession – Bristol’s economy has grown by 19.2 per cent, faster than any other city in the UK outside of London.

Bristol was named the fastest growing high tech region outside of London in 2014 and now has the biggest digital sector and the most entrepreneurs per head.

And if that wasn’t enough, in December 2015 the city topped an annual trade publication list as the best place in country for start-ups.

A quick internet search will give you an idea of what kinds of businesses are helping to drive the success. Among 15 start-ups chosen by the Guardian last year are companies specialising in web cluster storage, additive manufacturing and a fabless semiconductor company that develops multi-core microcontrollers.

High tech enough? More recent success stories have also come from the production of 3D-printed bionic arms by Open Bionics in Fishponds or Maplebird, a company developing small, flapping-winged drones at the Bristol and Bath Science Park in Emersons Green.

Open Bionics, based in Fishponds, are producing 3D-printed bionic arms

But James Durie, CEO of the city’s chamber of commerce Business West,  says there’s more to the success of the city than the headline-grabbing tech clusters.

“What makes Bristol beat all the rest of the cities in the UK is the depth and breadth of the economy,” he says.

The recent burst of high tech businesses are just adding to the firm grounding set by the advanced manufacturing industry, including companies like Airbus in Filton, financial and legal services such as Hargreaves Lansdown on Anchor Road, and the burgeoning creative industries, including countless film and television companies.

The city’s economy can be broken down further. Inside the city council boundaries, four main sectors dominate economic output and employment: professional and legal services, public services, finance and insurance, and wholesale and retail.

The first three are largely concentrated around the city centre, while wholesale and retail, worth over 10 per cent of the economy, is largely based around the Royal Portbury Docks near Avonmouth, and St Philips Marsh.

Outside of the council boundaries, but still considered Bristol by most, lie huge contributors to manufacturing like the cluster of defence and aerospace companies around the former Filton Airfield where BAE Systems, Airbus (where more than 4,000 people work) and Rolls-Royce all have bases.

A chart showing the breakdown between the sectors in Bristol in terms of economic output. Credit: Invest in Bristol

Airbus employs about 4,000 people where they build wings among other things in Filton. Picture from Department of Business, Innovation and Skills

The Ministry of Defence in Abbey Wood also contributes a lot to the economy through some 8,000 who work there, as does UWE next door, which employs more than 2,500 and growing.

Add to this solid grounding the recent boom in the construction industry, aided by the expansion of the Temple Quarter Enterprise Zone – the largest urban regeneration project in the UK – and the buoyant emerging low carbon industry and you have a recipe for success.

Back at the Engine Shed, which is run by the University of Bristol, centre director Nick Sturge sees the link between the old established players and the emerging tech sector in the so-called Silicon Gorge.

But he also sees the value in large companies which have recently chosen to relocate or establish themselves largescale in Bristol, such as Just Eat or Huawei, which opened a UK office and £125 million research and development centre in Bristol this summer, praising the region as “forward-thinking, progressive, and fostering innovation”.

Sturge, who has also been instrumental in setting up the SetSquared Business Acceleration Centre – a shared space for start-ups to blossom – above the Engine Shed – adds that “the expertise of such companies [as Huawei] trickles down to all parts of the ecosystem”.

But there is one more magic ingredient which is the real catalyst for the latest head-turning figures, Durie says. And that is Bristol itself. “Bristol is recognised as one of the most livable cities in the UK,” he says.

The “Bristol effect” is something of a driver at app developers Calvium, listed in the Guardian’s start-ups to watch last year.

Jo Reid, who helped form the company in 2009 with a group of former colleagues at the Hewlett Packard Labs in Stoke Gifford, says: “It’s this question of lifestyle which makes young businesses attractive to talented young and skilled people. They want to live here and they want to work with exciting technologies and be at the forefront.”

She says it’s irrelevant whether or not Bristol is comparable to San Francisco – the Silicon Gorge is just a label. “If is works, I’m happy. Like any label or zeitgeist it helps to create a buzz, which is great,” she adds at her Prince Street offices.

On my way out of my Engine Shed I grab management consultant Chris Bull as he pulls away from a casual meeting on the high tables near the cafe.

“When people wander down from the business incubator upstairs you can see people like us looking up at them just grabbing a coffee in their jeans and we’re all thinking they’re probably doing something very important for the future up there.”

For Chris, the attraction he sees for young talent moving to Bristol or staying in Bristol is a “triple whammy” of quality of work, quality of life and quality of culture.

It’s like London, he notes, but “without being aggressive, driven or solely focussed on growth”.

But, he adds: “The question is: will the success get the better of us like London? I can’t see it yet, but you can imagine when it gets too expensive here – and the transport infrastructure is already creaking.”

He buys into the Silicon Gorge label and the success which comes with it. But he’s looking ahead too. “If we are that successful then the other question has to be: what’s the next objective? Staying that successful and becoming more successful is really tough.”