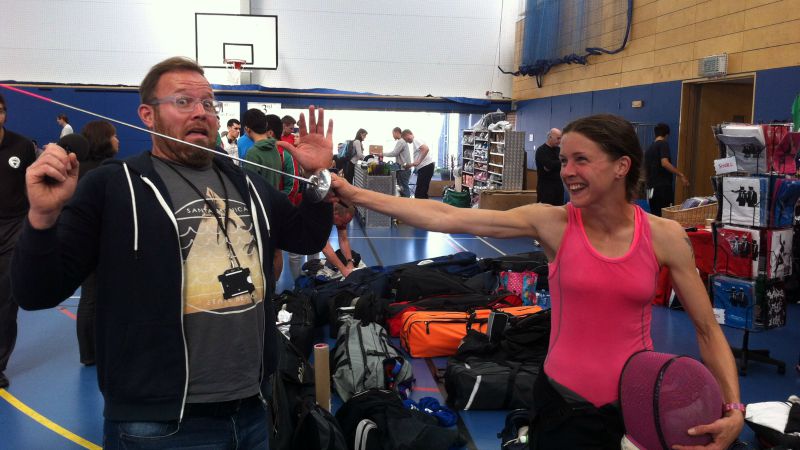 Approaching his first fencing tournament with a hint of inverse snobbery, Neil Maggs was surprised to meet the the UK’s only blind fencer – “an elf blessed with special powers”

Two days of fighting with blades in inner city Bristol would usually get the police sirens going, but last weekend there was a fencing competition at the City Academy.

Every little boy dreams of holding a sword, stick or light sabre at some point, imagining battling with Darth Vader or orks through the depths of Mordor.

But when I popped to the Bristol Open, I didn’t expect to come into contact with someone who was closer to the story of Lord of the Rings than I could ever have imagined, blind fencer and granddaughter of J.R.R. himself, Ruth Tolkien.

This was a prestigious event in the fencing calendar, and one which attracts competitors from all over the country and Europe.

In its 40th year, with hundreds of high-level competitors on display, this is a real coup for the city and a testimony to the first-class sport facilities at the former St George school where it was held for a 10th year in a row.

Fencing is not on the PE national curriculum for state education, but is played in the majority of public schools and has a reputation of being rather elitist – for the white, male, rich and able bodied. An Olympic sport, I expected to meet an array of former Etonians and Harrovians on show all vying for a place in Rio 2016.

The sport is divided into three events: sabre, epee, and foil. After being explained the difference between the three, and still confused, I was informed that today was foil.

Astrid one of the organisers and member of Bristol Fencing Club explained that, “foil is when unlike epee you aren’t allowed to slice, just hit the opponent. The idea is to hit and not get hit!’’

There was a sea of fencing matches on the various pistes all around me. Desperate to talk to some of the fencers but mindful not to interrupt the proceedings I approached two sweaty fencers that had just completed their match. Young and bright, they told me that they had both learnt their trade at Millfield, and Westminster College respectively.

The next chap firmly brushed me aside with entitlement as I had evidently disturbed his concentration, and then I briefly spoke to another competitor who sounded like he was Boris Johnson’s child.

Attempting to push my inverted snobbery to one side, I ventured to the other half of the sports hall, which seemed slightly different. There seemed a greater variety of ages, genders, shapes and sizes.

I stumbled across a couple of ladies, one had a strong East London accent and the other was a Geordie, who told me that they loved the sport.

The Londoner, Aesiha, was the only black person at the event, and she explained how she got involved in fencing. “I went to sessions in our summer holiday camps at local leisure centre, the local clubs were delivering taster sessions. Without that I doubt I would have known about or got involved in it.” And why fencing? “Because it’s different than usual sports like tennis and hockey or whatever, it’s a real physical and mental challenge. I prefer individual sports too.”

Astrid, who was my chaperone for the event, told me that fencing is really trying to make great strides to reach out to a wider audience, of all ages, genders, and social backgrounds.

“It is difficult when kids don’t do it in state schools, but at Bristol Fencing Club and White Eagle in Bristol we really try to do things in extra curricular time, after school clubs in other neighbourhoods and link with youth projects, to widen access.

“We try to limit the cost by supplying as much kit as possible. We are even trying to do more with community centres for older people too.”

Looking around more intently there did seem to be a wide range of age groups. I spotted a lady that looked well over 60, then another, and another greying chap in the twighlight of his years.

Philip told me that fencing “can be played until your 70 really, as it’s a very stretching sport, low impact, and you don’t really pick up many injuries from it. There is infact a thriving worldwide veterans scene”.

I admitted to Astrid that whilst I was aware of some great fencing stuff happening in local community centres, generally I was sceptical about the social connotations of the sport on arrival, but had to concede it was more inclusive than I anticipated.

She then said something that blew my mind – “Oh I forgot to say, see the lady fencing over there in the pink socks? just watched her, she is really good.

Yes, Ruth was registered blind. I waited eagerly to talk to her. She bounded over to me after finishing her fights and securing a place into the knock-out phases of the competition. With hundreds of questions buzzing around my head and still slightly bemused, I settled on: “How?”

She explained: “I tend to recognise a hazy body shape, I can’t actually see the blade and I can’t see my own blade. I can hear people on the piste – I zone out so I can’t hear anyone shouting just the sounds of movement from the opponent.

“I also use a lot of contact with the blade so you sense and feel what your opponent is doing. So if they pressure, I can then react to that. My coach gets me doing lots of muscle memory and repetition stuff, so it becomes instinctive.’’

I was utterly gobsmacked, I had seen Wing Chun kung fu demonstrations where the practitioner is blind folded against opponents and gets the better of them, science indicating that felt sense is indeed faster than the eye. But somebody coming at you with a sword!?!

I presumed that this must have been something that Ruth had mastered from a young age, or she had grown up in a fencing family.

No. Remarkably, she told me that she only started fencing at 28, in her hometown of Newquay in Cornwall. This was only four years ago and she has now reached the level of regional and national competition.

I wondered why she competed in sighted events not disability fencing. She said she would if there were any. Ruth was, in fact, the only blind fencer in the UK. She was keen to spread the message that it is safe and ok with the right training for blind and partially sighted people to fence.

It wasn’t until towards the end of the conversation that another lady fencer poked her head in and said something about her great grandfather being famous. Not knowing her surname, they both said “Tolkein’’. I laughed thinking they were joking. They weren’t.

“Yeah that’s right, I am the great granddaughter of J.R.R. Tolkein, author of Lord of the Rings.’’ Still not sure if this was a wind up, she laughed and said that she also rides horses and does dance at a high level – and her friends say she is like an elf blessed with special powers. Amazing.

Ruth grew up hearing tales from her family of Bilbo and Frodo Baggins fighting dragons and Orks with swords. In one way she now lives that reality, despite the obstacles in her life.

One of the most inspiring sports people I have ever come across, if Ruth can, then anyone can. There may well still be some barriers to the sport, but you don’t need to go to Eton or even be able to see for that matter, to take up fencing.

For more information on how you can get involved with fencing locally visit www.swfencing.co.uk/clubs.