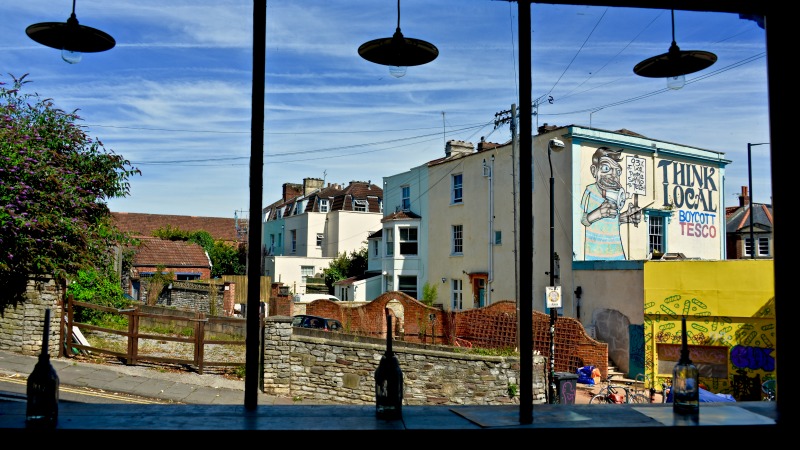 Stokes Croft has been named as one of the 10 hippest areas in the UK.

The area has been named joint-ninth in TravelSupermarket’s Hip Hangout Neighbourhood Index, which claims to be “the definitive ranking of the most up-and-coming neighbourhoods in the UK and Europe”.

Taking first place on the UK list is Manchester’s Ancoats district, followed in second place by Leith in Edinburgh.

Top of the European Index was Kreuzberg in Berlin, followed by Riga, Latvia in second, just pipping Ancoats into third place.

Emma Coulthurst from TravelSupermarket says the aim of the Index is to inspire city breakers with ideas for new places to discover. She said: “The Index will hopefully put Stokes Croft and Bristol even more on the map and encourage new and returning visitors.”

Kathryn Davis, head of tourism at Destination Bristol, added: “Bristol takes great pride in being a creative, ‘can do’ destination with an independent spirit, and no other area of the city captures that quite like Stokes Croft.

“Street art on almost every corner gives it an unmistakable identity all of its own, independent cafes and shops give it daytime appeal, while award-winning restaurants, cool bars and an edgy, thriving music scene bring it to life at night.

“There’s something to suit everyone here, which is the mark of an exceptionally diverse area with boundless energy.”

The Stokes Croft riots of April 2011 – photo by Jon Craig

Three key indicators were measured to create the index. These were:

– Traveller Value – this looked at the potential savings to be made (or not) for travellers staying in these neighbourhoods rather than in the city centre.

Penalty points were subtracted for areas that had high numbers of big chain brands such as Starbucks, Costa and Pret a Manger etc., which would indicate that they had reached ‘Peak Hipster’.

Read more: ‘Why Stokes Croft has had its day’