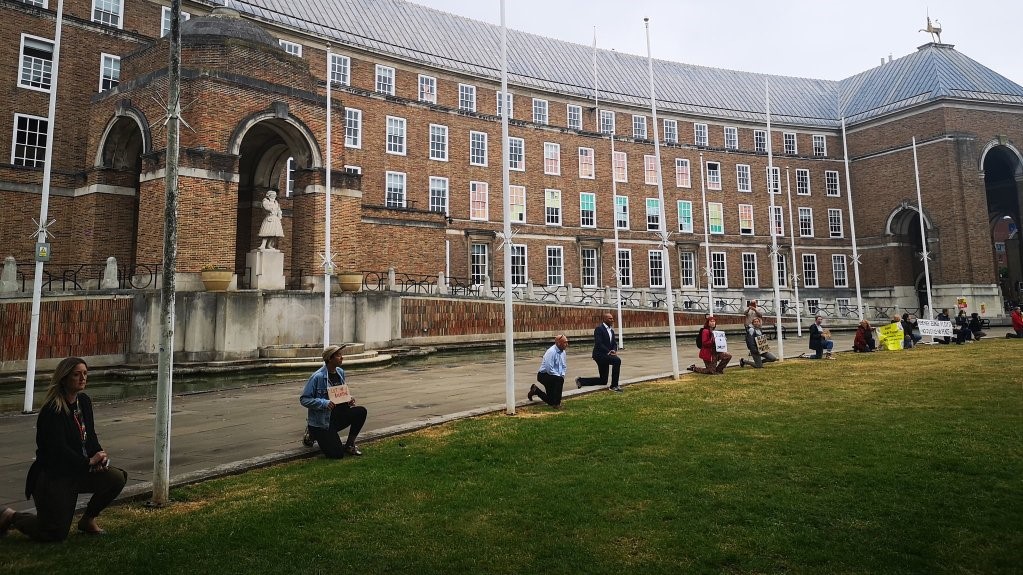 Bristol’s mayor joined thousands of people across the world on Wednesday as he ‘took the knee’ in memory of George Floyd and other unarmed black people killed every year by police.

Copying the gesture devised by American footballer Colin Kaepernick in 2016, Marvin Rees was joined in front of City Hall by senior council colleagues including Kevin Slocombe, head of the mayor’s office, and Saskia Konynenburg, head of external communications & consultation.

Earlier in the day, Rees had played a key role in UK city leaders writing a letter to the African American Mayors Association.

The letter thanked the US mayors “for the stand you have taken in the face of (Donald Trump) and for being a source of political hope in a country that to the outside world appears to be losing its way and losing its hope”.

"You can't understand individual actions without understanding the history"

Bristol's @MarvinJRees, the first elected black mayor in Europe, responds to criticisms of those protesting the death of #GeorgeFloyd.#5LiveBreakfast

Rees has also questioned whether the planned Black Lives Matter protest due to take place in Bristol on Sunday should be happening during the coronavirus pandemic.

Writing on his blog, he said: “Plans are underway to hold Black Lives Matter demonstrations in Bristol over the coming days. I understand this. We are outraged and our voices must be heard.

“But after much thought, I am questioning the wisdom and any method of sharing that voice that encourages a mass gathering.

“I do not oppose the demonstration. Rather, I am concerned that anything that encourages a mass gathering while we have Covid with us and we have no vaccine is high risk, and the risk is disproportionately born by black and brown communities. Responsible leadership must bear this in mind.”

He added: “I am for the message. I am merely very concerned that the Covid context means any method of delivering that message that encourages or requires mass gathering could have unfortunate unintended consequences for the communities we are trying to support – and that’s not just the individuals who attend but the people and community members they go home to.

“I will not dampen down people’s passion. I support them. I would simply suggest there are other ways we can make our voices heard.

“We could put our minds together to create a huge digital presence, one that declares opposition to Trump’s politics and support for the mayors that are standing up to him.”